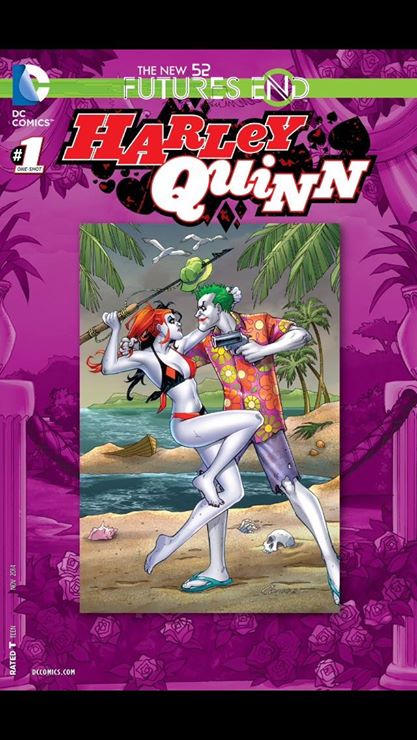 Best FUTURES END hands down is this week’s issue of HARLEY QUINN. Having been washed up on an island she is reunited with her beloved Puddin for some fantasy wedding shenanigans!

Not only was this issue an epic story arc on its own but the best FUTURES END issue written yet. It made sense had a connecting story link to the series and nothing about the manic woman had changed at all. Jimmy Palmiotti and Amanda Conner have made magic again with their quirky language for both Harley Quinn and the Joker. I love that he isn’t the star of her world but yet has made the famous cameo appearance audiences had been waiting for. You can’t really have one without the other but that said he walks out of her story just as bizarrely as he walked in. The hilarious dialogue is perfectly true to the arguing duo and I found everything still captured the true essence of Harley Quinn’s nature. You could hardly tell that 5 years had passed in her would and it seemed like she was taking just another random adventure.

The artists Alex Sinclair and Chad Hardwin had a field day with the issue as it felt more like reading an annual than a Futures end edition. The tropical island gave them a colorful canvas to work with that was edged in fiery oranges and reds splashed against the cooling greens and blues of the trees and water. Every time Harley Quinn is drawn, her beauty only gets stronger. Even the Joker didn’t look as ugly as he usually does this Harley’s world. Everything from the well-structured paneling to the extreme bold color palette fit the entire issue and really gave the story its life. It was like you had to read it twice just to catch all the little details you missed.

Jimmy Palmiotti and Amanda Conner are the perfect hit for HARLEY QUINN. Nothing can beat the superb language that is deeply researched for her. Her hilarious shocking one-liners of babble are exactly what you want from a woman that’s half crazy and talking to her conscience in the form of a beaver skull. I also loved the little personal touches to the comic, her speech bubbles that had the diamonds around them were just beautiful, not to mention the character breaking the fourth wall with them. It was like she saw them floating around her head as she spoke. The Disney slip in really stole it for me though. The reference was extremely clever as most people reading the comic around my age have watched Cinderella growing up, so everyone related to not only the event but the way Harley had imagined it. I would bet everyone at some point wanted singing animals to dress them for their wedding.

The negative is it had to end!  As a side story it worked beautifully but all good things come to an end. The only other negative was a space issue in the comic panels. Trying to cram a lot of explanation into a panel that are 10 cm big can be a bit of a read but if you want more story just put up with it.

A massive thumbs up for HARLEY QUINN and her sabotaged wedding this week. Now going back into the past 5 years, I can’t wait to see what craziness the Joker happened to be watching while he kept tabs on her. The issue is without a doubt the best FUTURES END and should be a mandatory freebie it’s just that good.