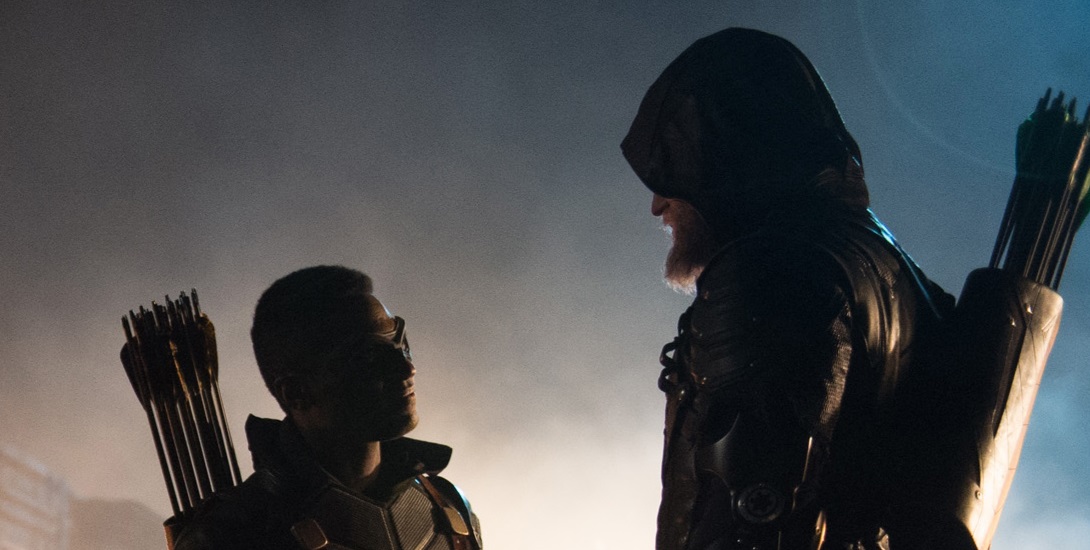 In this episode, the team is trapped in 2046 Star City but the city has fallen to the rule of a familiar tyrant.

The team has been stranded in 2046 Star City thanks to Chronos. They discover the city in ruins and are confronted by Green Arrow. However, it is not Oliver Queen; it is Connor Hawke. In 2031, the son of Slade Wilson, Grant, took up the mantle of Deathstroke and conquered Star City. Because Sara and Ray were not there to help Team Arrow, Deathstroke killed all of them except Oliver and Connor who is John Diggle’s son. Sara is determined to help Oliver and Connor defeat Grant while the rest of the team fixes the ship.

Joseph David-Jones is great as Connor. He’s a terrific counter point to Stephen Amell and has wonderful presence in the costume. I hope he becomes a bigger part of this universe in the future. I would love a show entirely about this Connor.

The production value is incredible. The city in ruins looks nothing short of fantastic. This is the first time on the show that I have fully believed the environment. The previous episodes felt a little cheap but this future is captivating to look at and wonderfully designed. Additionally, the costumes for Green Arrow and Deathstroke are cool. The variations are small but really do make a difference and properly set them apart from their predecessors’ costumes without being too radical.

I like Old Man Ollie. Amell plays it well and it’s fun to see the character at this point in his life especially with a robot arm.

Sara is terrific in this episode. First, she gets a seriously fly coat that she should wear all of the time because it is seriously cool. Second, she continues to be the best hero of the show. Without question, she wants to help and save the city even though it ultimately won’t matter. Sara sees people in danger and does everything in her power to help them. There is an interesting parallel between her and how Barry acts on Earth 2. In a way, they shouldn’t care but they do anyway and that is admirable.

I do not understand why Connor is Diggle’s son instead of Oliver’s. Especially since the current season of Arrow is dealing so heavily with Oliver’s son, it would have been really cool to tie them together. William should have been Connor. Additionally, there could have been an incredibly interesting parallel between Grant and Connor that is missing because Connor is not Oliver’s son. They have the same dynamic as I would expect them to but they’re not related. If it’s because they really wanted David-Jones and he is obviously African-American, that is perfectly fine with me. The solution to that is that William and Connor are half-brothers and Ollie had the latter with an African-American woman. With that, there would be a great contrast between Oliver’s decisions as a parent with William and his decisions with Connor. While I like Connor a lot, there are a lot of missed opportunities with him as a character.

Grant Wilson doesn’t work for me. He has no personality or character beyond being a token bad guy. The writers play it like he inherited craziness from his father but Slade wasn’t naturally crazy. His brain was exposed to horrific trauma and drugs that broke him. A person cannot inherit that; it was lazy writing. I also don’t buy that he was able to defeat Team Arrow. Granted, we don’t know the state of this continuity in 2031 but I find it hard to believe that he won simply because Sara and Ray weren’t there. Barry, Vixen or Constantine could have easily helped in defeating him which brings me to the next problem. What is going in the rest of the world? Is every city like this or did they just give up on Star City? Is it a No Man’s Land situation? I honestly have no idea what is going on in this future.

The basic premise of this episode completely contradicts the premise of the show. In the pilot, Rip said he chose the team because their deaths don’t have an affect on the timeline. However, this episode shows that the deaths of Sara and Ray lead to the apocalypse and the deaths of major characters in this universe. That does not add up at all.

The love triangle between Jax, Ray and Hawkgirl is pointless and irritating. They all decide not to date and go on their merry ways at the end. It was pure filler.

Unfortunately, this episode ends up as a disappointment. There are great elements and terrific potential. The production is great and Sara, Connor and Old Man Ollie all really work as characters. However, the situation lacked a good villain and the future was too vague for my tastes. There was also quite a bit of filler and the episode ultimately wastes a lot its potential.