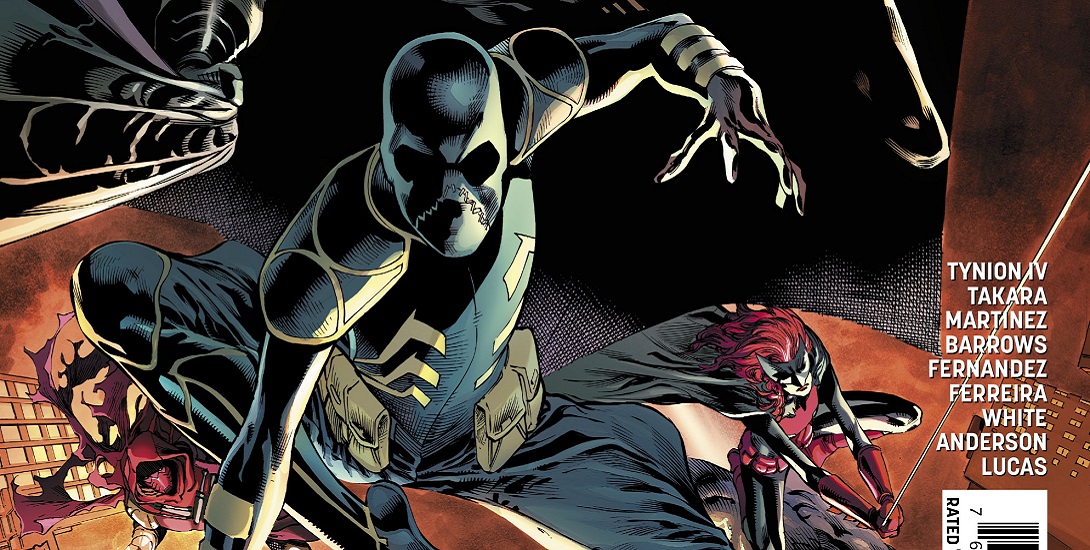 This oversize anniversary issue of Detective Comics contains three stories, “League of Shadows,” “Higher Powers,” and “The Big Picture.” The first story follows Cassandra Cain and she narrates her thoughts and feelings through us through a variety of scenarios. “Higher Powers” is about an evening shared between Batwing and Azrael while they train and end up discussing their beliefs. The last story is a brief look into the not so distant past where we see an exchange between Batman and Red Robin.

The first story with Cassandra Cain lets the reader get to know the person hiding inside the living weapon that is Orphan. We get to see her concerns with herself in public, but also her fears around the others. While very similar to Batman in training and isolation, Cassandra also points out to us how they are very different. She continues to do this and explore her fears with regard to her work with Batman. There is a very beautiful and sad moment where she talks about the movements of others and how she chooses to move, which reveals who she might have been in another life.

The story with Azrael and Batwing is equally interesting in a different way. While the action and intensity of their training is spectacular this story really shines in their conversation. It is a talk that normally would take place with a dear friend over a good drink in a comfortable place. They discuss their beliefs as a man of science and of faith and then discuss Azrael’s suit and purpose. Batwing goes on to bring up a very interesting point in the scripture that guides the warrior angel that his fans will find interesting.

The final story you’ll have to hear about when you pic up your issue!

Positives
The art in these issues was very distinct and so where the themes used to tell them which makes it very clear that they are distinct.

The art styles are also perfectly matched for the characters and themes. Cassandra’s story is of a young woman trying to understand herself in her world. The art used in her story is more fluid, less detailed at times, and feels younger. In contrast, the art for Azrael’s story is highly detailed, everything is drawn with great detail and sharp lines which feels more mature for the adult character and conversation.

The  writing in both of these stories is also similarly unique with a more juvenile writing for Cassandra and an adult and sophisticated text for Azrael. It is truly a credit to James Tynion IV that he could write two contrasting stories into one issue and make them feel so unique.

Verdict
As any oversized special should be, this issue is packed with story. We get a look at every member of the new Bat-Family and a look ahead to what might be around the next bend. James Tynion IV is a fabulous creator and this is another notch in his impressive library of stories.