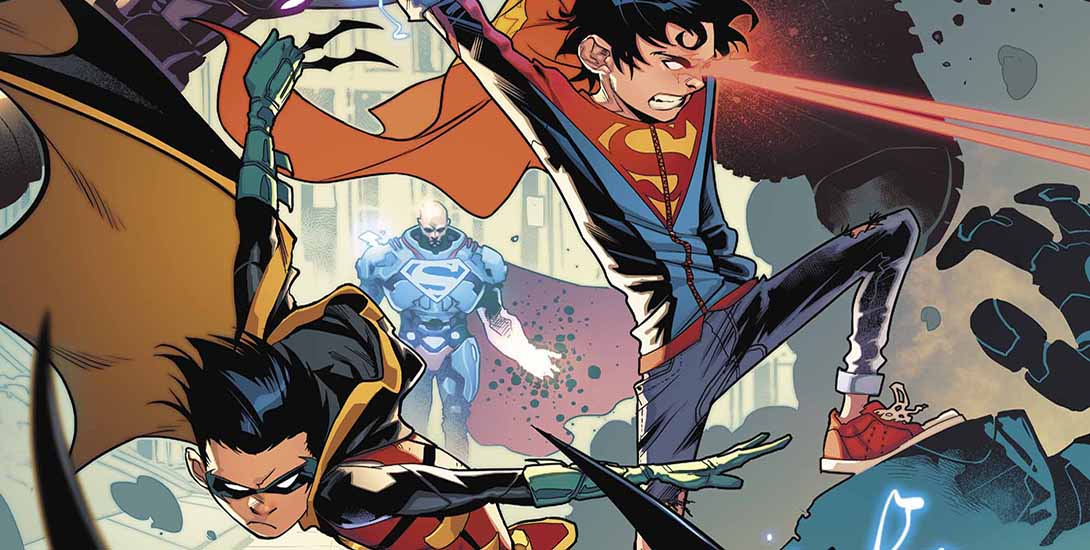 What better way to start your night of mischievousness than a little breaking & entering and kicking Lex Luthor right in the face! I can’t imagine anything to be honest. Robin and Superboy continue their investigation into LexCorp in this issue, well Robin does and Superboy reluctantly comes along with him. When things get tough though, the less experienced Jonathan panics and bolts, luckily Luthor finds him far more interesting than Robin and they succeed in their mission only to find something much worse waiting for them.

This series, from it’s start, has had a lot of expectations to live up to. From the first panel to the last in this book, it couldn’t be more clear that this issue isn’t simply Batman/Superman with teens. Not only do they not work together like their parents, they barely function together at all! Damien, with his years of training, and ever serious father, views the skittish Jonathan as a hindrance, except when he is a useful tool. This distinction between them and their parents, and the bickering between them creates a much different dynamic to that of Batman and Superman.

The art of Jorge Jimenez is also fantastic in this book. The expressions and gestures of the mismatched duo are exaggerated and comical. They almost fit in the vein of classic cartoons with extreme exaggeration feeling very whimsical.

It is also very fun to see what the child of Lois and Superman does and how he behaves. Due to his upbringing and the teachings of his father he isn’t afraid of his powers. But unlike his father, he was raised to be a primarily normal boy and he has the same fears as a young man would when breaking the rules and breaking out at night.

This book was fantastic and it is clear that seasoned readers will understand and enjoy that action and drive of Damian, while the younger and newer readers will connect and understand the feelings of Jonathan.