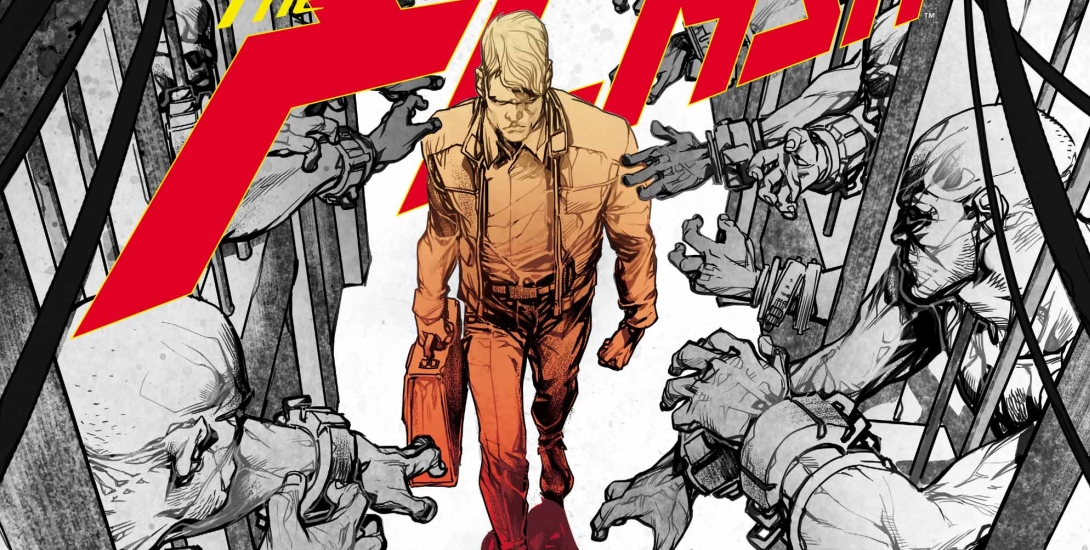 “Welcome to Iron Heights.” It’s Barry Allen’s first day on the job at Iron Heights Penitentiary, and it does NOT go very well as Warden Wolfe proves to be an even more demanding boss than Director Singh at the CCPD Crime Lab! And to top it all off, a ghost from Flash’s past comes back to haunt him!

There’s a lot going on this issue. Barry’s been transferred to a new job at Iron Heights penitentiary, where the villains that he defeats get incarcerated. This opens up the interesting notion of the Flash interacting with his villains in his civilian identity rather than as a superhero. Barry only briefly interacts with the villains in this issue, but his presence has been noted by both Captain Cold and Godspeed.

Speaking of Captain Cold, we know he has been running his newly established organized crime empire from Iron Heights, so it seems inevitable that Barry will figure out what Cold and the other Rogues are up to.

I’ve noted before that Barry is the optimistic heart of the DCU. However, we see him continuing to struggle to deal with his new connection with the Negative Speed Force, which seems to be infecting him with its negativity.

Barry starts off on a positive note in this issue, but slides back into the negativity. Barry has discovered that while he is training with Kid Flash, Wally’s presence boosts his positivity, giving him better control over it. However, even though The Flash and Kid Flash have patched things up, Barry and Wally still haven’t properly reconciled.

Later, in Iron Heights, Barry finds himself agreeing with his new boss, Warden Wolfe, stating that the prisoners there can’t be rehabilitated and don’t deserve a second chance. This is a startlingly pessimistic attitude for Barry to espouse, which is a clear indication that the Negative Speed Force is having an effect on Barry’s emotional state.

Finally, Barry discovers that Meena Dhawan is still alive. Last we saw, she was working for the Black Hole gang. So we don’t know yet if she’s on the still on the side of good, or if she’s going to cause problems for Barry. Also, with Barry and Iris’ relationship in limbo, the presence of his ex-girlfriend is likely to complicate any possible reconciliation between him and Iris.

Barry’s new job setting may open some interesting story possibilities, but it also poses some possible difficulties for his superheroic activities. The prison is designed to keep super-powered villains from escaping – including some speedsters. Will Barry be able to come and go from the prison when emergencies arise?

Also, Barry still won’t face Iris or even ask Wally about her. If their relationship is going to continue, they have at least talk to each other – and soon.

It is apparent that there is a battle going on between positivity and negativity going on in Barry’s soul, which reflects the war between those forces that seems to be happening in the wider DCU. The Rebirth saga seems to be building to something big, and I’m betting that Barry will be in the thick of it.