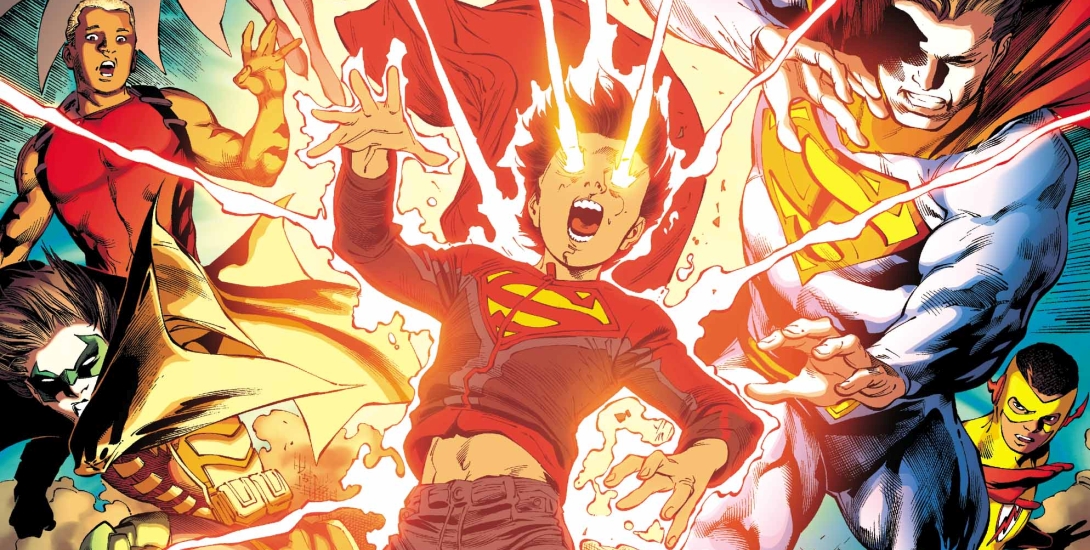 “SUPER SONS OF TOMORROW” part one! The four-part crossover between Superman, the Super Sons and the Teen Titans starts here! The Batman of Tomorrow travels to the present to prevent a cataclysmic disaster before it happens, revealing that Superboy will soon be responsible for the death of millions. But Superman will do anything to protect his son…and the Batman of Tomorrow is unwavering in his resolve to take down the Boy of Steel. Don’t miss a clash of titanic proportion in the opening chapter of this game-changing story!

Probably the coolest part of this story is that we get to see Batman fighting Bruce Wayne. It’s a different Batman from an alternate future, but that doesn’t diminish the fun of seeing Bruce and his alter ego squaring off.

We also get to see this Batman face off against Superman. Now DC has drawn from the Batman vs. Superman well many times, but it never gets old seeing DC’s two brightest stars go at it – even if one is an ersatz Batman.

Also, we revisit the idea of Batman’s secret plans to take down his fellow Justice Leaguers. The alternate future Tim Drake steals Batman’s anti-Kryptonian failsafe to use against Superman and son. This is almost becoming cliché at this point, but it still drives home that the weapon will be effective, knowing that Batman designed it.

I know Tomasi and Gleason didn’t invent the idea of the future Tim Drake seeking to kill someone in the present to prevent a horrific future. They have borrowed this from a recent storyline in Detective Comics. However, I still find it extremely difficult to believe that someone as intelligent and well-intentioned as Tim would resort to attempting murder to fix the past. Tim would find some other way to alter past events to avoid that future. Hopefully this storyline will come up with a better explanation that has turned Tim into someone who would consider murdering an innocent child.

Also, it seem somewhat odd that Superman’s team-up with the Super Sons and the Teen Titans starts off with no sign of Superboy, Robin, or a single Titan. However, the coolness of seeing a Batman facing first Bruce Wayne and Superman more than makes up for their absence.

The “Super Sons of Tomorrow” event has started with a bang and if the subsequent chapters keep up the momentum, then this will be one of the year’s best comics events.