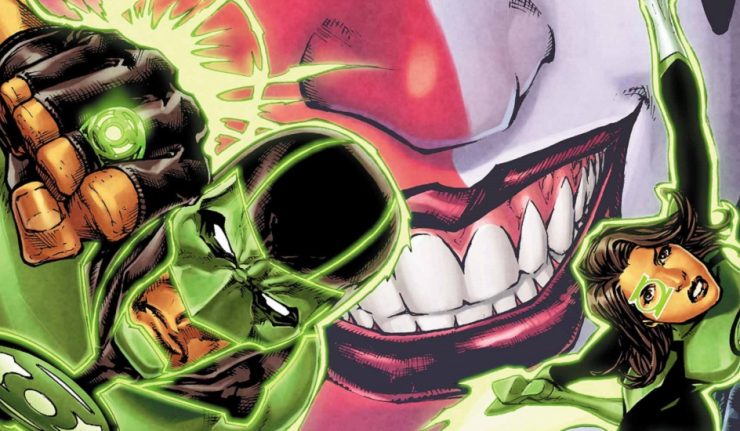 “A WORLD OF OUR OWN” part two! Hunting the trail of the man behind the string of murders on the planet Ungara, Simon Baz and Jessica Cruz find the alien world thrown into utter chaos. Lines are drawn amongst the Ungaran people, and if the Green Lanterns can’t bring the villain to justice, Ungara may explode into violence!

Despite all the action and fighting that went on this issue, the best take away I found was how Seeley does such a great job at really making you feel for the Molites. Put aside that they are adorably small creatures, the way they’ve been treated and oppressed since being immigrated to Ungara has been tough. Not only have they been framed for murder, but the inhabitants treat them poorly, simply because they look and act different. Really makes you feel for them. I really appreciate that Seeley took such a fantastic and dynamic look at the issue of indifference and acceptance.

The art in this issue was very good. Beautiful colors and incredible action pages really made this issue stand out.

I don’t usually find negatives in the Green Lantern books, but this one is unfortunately different.

For starters, I found the “big reveal” to be somewhat predictable. As soon as I saw how badly Liseth wanted to go with them to face Kesh Cur, and then disappeared unexpectedly, you felt what was going to happen. No real surprise there. As such, I felt that the story itself, although decent, was somewhat boring, and didn’t have that sense of thrill or excitement that I usually get in a Green Lantern book. There was a part in this issue where Jessica and Simon have a disagreement about how to handle the situation. Even getting pretty personal. Had Seeley explored that bit a little longer, maybe even escalating the confrontation between the two, it would have made the story a lot more interesting.

Secondly, I really like Kesh Cur as the villain in this issue, especially his use and description of the surge engine. Seeley seemed to really have a good grasp on this villain, and it was so unfortunate to see what happened to him. I have a feeling Seeley could have done great things with that character.

Not the best issue Seeley has put out since taking over Green Lanterns, but still worth a read for sure.