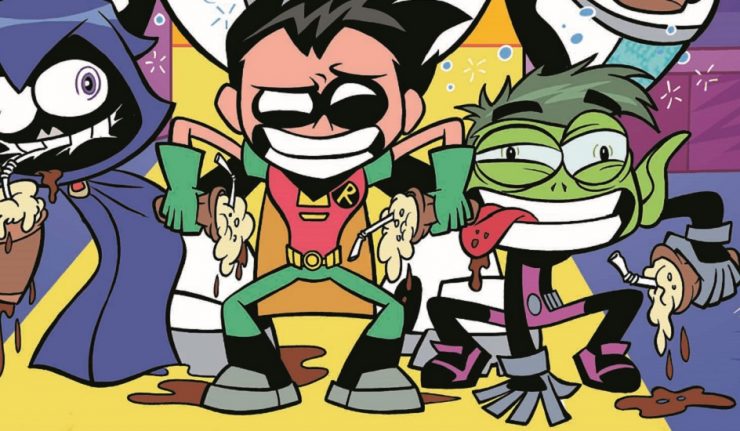 A new time-wasting gadget has become Jump City’s latest craze, and no one’s getting anything done. Beast Boy and Cyborg seem immune to its spell, but can the team’s LEAST-motivated members find the Fun Gus “Among Us”? And the Titans discover a new neighborhood treat when Jump City becomes “Grounds Zero” for the caffeine craze sweeping the nation!

This proved to be another fun issue of Teen Titans GO!  This is one of the books I tend to look forward to because it’s so different and the lighter tone is a nice break from some of the more serious fare I tend to read.

As I’ve said in previous reviews, this series feels just like the animated series.  I read each line of dialogue in the respective character’s voices, and if almost always seems to fit perfectly, which is impressive with having different writers for the two stories.  They have a nice flow, and know how to hit the humor just like in the show.

The artwork is also great and resembles the show in such a great way.  Every time I read one of these, it’s like I’m playing out an episode of the series in my head.  I also want to mention the fun little easter egg gag in the second story.  Toward the beginning we see a star fish on a rock outside of Titan Tower.  At first I thought maybe it was going to have something to do with Starro, which it didn’t, however it did come back around as we saw that same star fish again later wearing the toe-tappers.  It made me chuckle.  It’s nice to see the artists throw in little details like that for those of us looking.

As with several of these issues, I felt that the second story wasn’t quite as good as the first, which caused the book to end not quite as high as it could have it they had been reversed.  Other than that, I didn’t have any complaints.

Overall, this was a fun issue to read.  I always look forward to when these come out, and I wasn’t disappointed with this one.  So if you’re a fan of the show, you definitely should be reading this series.