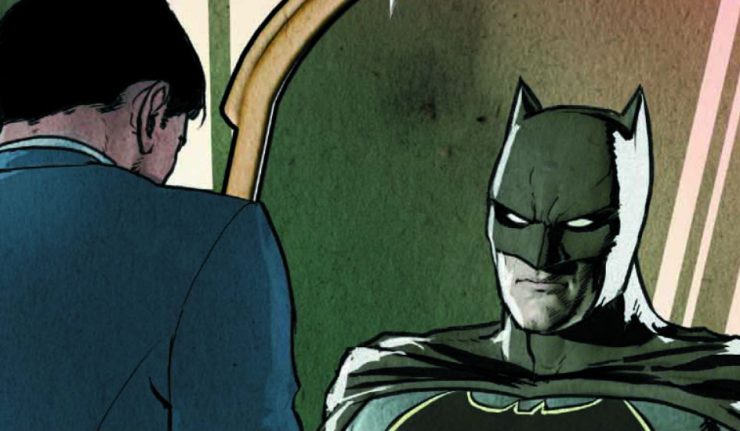 As Bruce Wayne sleeps the night away at Wayne Manor, Selina sneaks out of bed to creep out into the darkness of Gotham City! Has she turned back to her life of crime? With the wedding between Bruce and Selina around the corner, has she truly returned to her old ways?

This is strictly a Selina Kyle story. As Bruce sleeps in Wayne Manor, Selina creeps off into the city to break into a wedding shop! You would figure that being married to a billionaire would break the whole stealing habit–however with Selina I guess not. While in the present, Selina is desperately trying on dress after dress, King takes us on a walk down memory lane with numerous tales of encounters between Batman and Catwoman. Continuity is strong with this issue as you see their costumes change with the times as well, and it was a great way to show the progress of love and affection for each other through the years. It’s clear that Batman and Catwoman had a very complicated relationship–she makes a plot to kill Batman, but then saves him at the last second, inadvertently knocking herself out. When we return to the present time, Selina has found her perfect dress–an all black gown, with a small mix of white.

My only complaint about this issue is the need for Selina to steal the dress in the first place. Although it’s in her nature, I really wished that King would’ve had herself address the thought at least in her mind. Maybe an “old habits die hard” quote or something would’ve sufficed. Also, I find it hard to believe that Bruce Wayne slept the entire night without noticing Selina was gone. I’d think someone as well trained as Bruce would notice the slightest change in the environment around him–even while sleeping. My thinking is that maybe Bruce noticed Selina leaving and out of trust, just decided not to act at all.

Overall I thought this was a good read. Although there wasn’t a threat necessarily for Selina to deal with in this issue, King did a great job with showing how far Catwoman has come as a character over the years. I remember when Batman hardly ever trusted Catwoman, and the times he did, he always had a contingency plan in place just in case she’d betray him. Now things between Bruce and Selina have come full circle–and they both truly trust each other. I can actually say this is one wedding I’m definitely looking forward to.