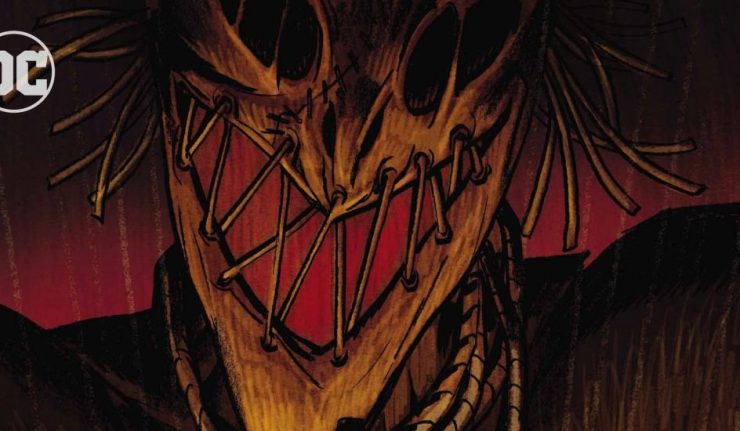 Batman’s got a bull’s-eye on his back in part four of “Target: Batman.” Thanks to the machinations of the Scarecrow, the entire city of Neo-Gotham is looking to take aim at the Dark Knight—including his own partner, Robin! Will hero turn against hero when fear is in the air? Elsewhere, former Royal Flusher Melanie Walker looks to upgrade her image and take on a new heroic mantle, so she seeks advice from newsman Jack Ryder—unaware that he’s a total costumed Creeper!

This issue, we find out who the new Scarecrow really is. Fittingly, Scarecrow was traumatized at an early age by Batman. It is somewhat ironic that Batman’s primary weapon against criminals, fear, has also created a new villain. Jack Ryder, once the Creeper, berates Bruce for assuming that “innocent people would be immune to your appearance and tactics.

Not only has Scarecrow turned Gotham against Batman, but also many of Terry’s allies: Commissioner Barbara Gordon, Max Gibson, Dana Tan, even the his brother Matt, the new Robin. And it’s his allies that can hurt him the most. Barbara Gordon knows how to easily breach the Batmobile’s shields and Matt disables Terry’s ability to fly, sending him plummeting to the ground below.

Interestingly Melanie Walker (formerly Ten of the Royal Flush Gang) seems immune to the effects of Scarecrow’s anti-Batman hysteria. Call it a hunch, but I feel that Melanie’s going to soon adopt a new heroic identity. Perhaps that’s why Jack Ryder’s making an appearance in this storyline. Could Melanie be on her way to becoming a new Creeper?

This issue also provides a better chance to see Matt’s new Robin outfit in action. I must say that I find it to be very ‘Schway.’ It matches the esthetic of Terry’s Batman suit, but still clearly says Robin. I hope Terry decides to let him keep wearing it.

As cool as it is to have a new Robin, Scarecrow, and possibly a new Creeper, it might be a good idea to add some new elements to the series as well. There seems to have been a lot of looking backwards in this series. Besides new legacy characters, there also have been a number of visits from old friends and foes: the Joker, Jack Ryder, Damian Wayne, as well as characters returning from the cartoon.

But there hasn’t been a lot of new elements added to the Batman Beyond mythos. Looking back is good, and has proved a necessary component of the Rebirth era, but there has to be some movement forward as well. Not that I haven’t been enjoying every bit of the saga so far. It’s just that the balance is starting to tip a bit too far towards dwelling in the past, so it might be a good point to introduce a wholly new villain or two.

Honestly, this title has been a revelation to me. The idea of someone other than Bruce Wayne as Batman shouldn’t work, but Jurgens deftly manages to make Terry’s story nearly as compelling as his predecessor’s, giving us some damn fun stories along the way.