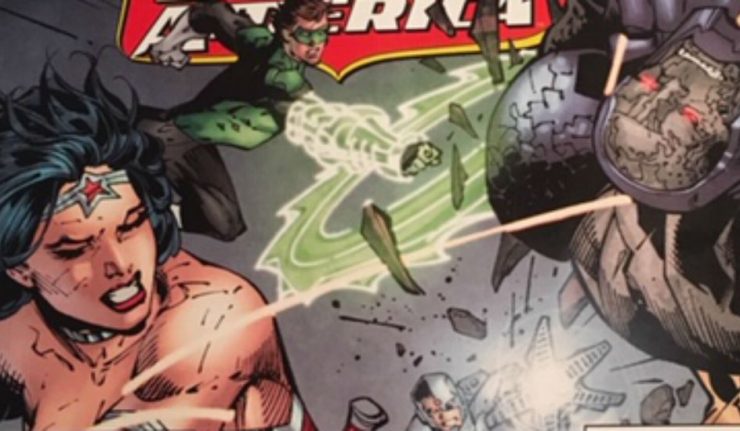 Now teamed up with Jonah Hex, Diana and Etta follow his lead on the search for the missing Steve Trevor on the uncharted island in the Bermuda Triangle.  Their search leads to a cave where they fight off a crew of robots guarding a princess.  The princess doesn’t recall her own identity or how she got to the island, but she’s obviously alien.  Legion of Super-Heroes fans will certainly see a resemblance to Brainiac 5.  Could she be Coluan?

Diana, Ettta, Jonah and the princess use the technology in her cave to find Trevor and his co-pilots.  They are able to view them on a video screen that has a live feed from a different part of the island.  Diana wastes little time as she races off to try and prevent Steve being attacked by a swarm of horse-sized  flying bugs!

The issue also contains reprints of Justice League #6, The Flash #6 and Aquaman #6.

This good old-fashioned tale is just plain fun.  It’s nice to see Diana so unabashedly affectionate of Trevor.  This was down played for a number of years in Wonder Woman comics, but since “The New 52,” Steve Trevor’s role has become more prominent.

There’s no shortage of the wild and wacky in this story, dinosaurs, alien princesses, time travel, robots and giant flying insects!  While the princess may certainly turn out not to be Coluan, the prospect alone is interesting and fun.  Any connection to the Legion, no matter how tangential is welcomed.

It seems that Diana fits into many different genres and this story is the poster child for that!

There’s no real negative, but this story is one that is more about fun and connecting to Wonder Woman’s tales of the ’50’s and ’60’s.  Don’t get me wrong, the team are doing a great job evoking that vibe, but it might be a little odd for some readers. (Not this one, though.)

There’s no shortage of fun in “Come Back to Me.”  This chapter introduces a mysterious alien princess who COULD be Coluan.  Just a guess….  For a fun adventure reminiscent of a bygone era, you should be reading this.  The nostalgia is palpable, and there’s never a dull moment as the aspects of this form of chapter storytelling are wonderfully exploited.