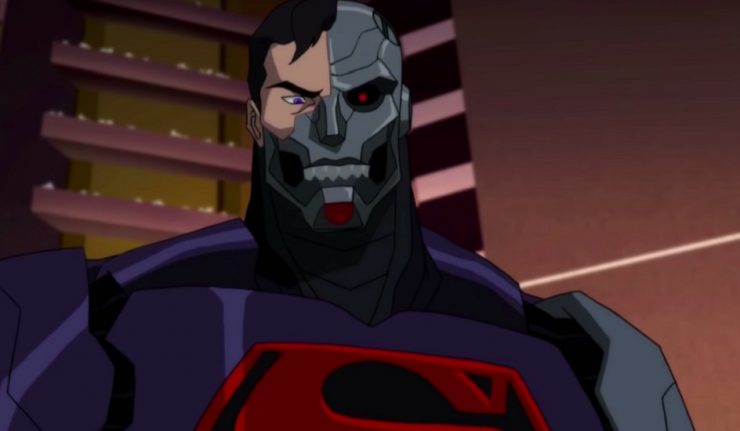 Following Superman’s sacrifice to defeat Doomsday, the world reels from the superhero’s death. Several different versions of the hero pop up on Earth to take his place, including Superboy, Steel, Cyborg Superman, and Eradicator. But something larger is afoot.  Who will step up to save the day, and possibly the world?

Just over 26 years ago, a comic book event took place that shook the industry, and its readers, to their core.  That event was the infamous “Death of Superman”.  This story was so big, so powerful, that it made headlines in newspapers all across the world.  It changed comics forever.  Then, in 2007, DC launched their animated film line with an adaptation of this story, called Superman/Doomsday.  Now, while this was a decent adaptation for the time, it was severely lacking in many ways.  This was a story far too broad to be contained within the film’s 77 minute runtime, and it took over a decade before DC was willing to take another crack at it, and I’m so glad they did.

Last July, DC released the first of a two-part adaptation of the death and return of the Man of Steel, simply titled The Death of Superman.  This was a fantastic retelling of this classic story, as the 81 minute runtime really allowed this portion of the story to breathe.  Just like with DC’s animated version of The Dark Knight Returns, this story works best when broken into two parts, giving the storytellers the chance to really sink their teeth into it and flesh it out.

The Death of Superman told the story of Superman’s battle with the killing machine known as Doomsday.  I was lucky enough to catch the Fathom Event’s double feature of The Death of Superman along with the premiere of the second installment, Reign of the Supermen.  While watching the first film, I noticed something that I hadn’t caught the first time around, and that is that Doomsday actually emerges from a Boom Tube in outer space.  I hadn’t noticed that before, and honestly, I’m glad I didn’t.  Seeing it for the first time here and then jumping right into the second film gave me the answers I wanted without having to wait.

And that brings me to the film I’m really here to talk about – Reign of the Supermen.  The film starts off six months after the events of The Death of Superman.  The world is still reeling from the loss of the Man of Steel, while also having four new “Supermen” around.  First off we have Superboy, the clone of Superman, created by Lex Luthor at Cadmus Labs.  Voiced by Cameron Monaghan (who plays Jeremiah “Joker” Valeska on Gotham), Superboy is a young, arrogant, and naïve version of Superman.  The writers did a great job with this character, especially having him be obsessed with 90’s sitcoms and spouting off cheesy 90’s catchphrases like “slammin’!”.  It was perfect since the original story came out in the early 90’s.

Next we have Steel, aka Dr. John Henry Irons.  We first meet Irons in The Death of Superman, where it’s established that he’s a huge fan of the Boy in Blue, and that Superman even saved his life once.  This is the reason he decides to build his armored suit and take up the shield in Superman’s absence.  He feels like it’s his duty to repay Superman for saving his life.  Steel is voiced by another DC vet, Cress Williams, who plays Black Lightning on the CW series.  I absolutely loved the tech used for Steel, from the suit to the awesome jet powered hammer.  He’s definitely a character I’d like to see come back.

The third of the “Supermen” is the Eradicator.  This version is a Kryptonian hologram whose sole purpose is to protect Superman while he is healing in the Fortress of Solitude.  To be honest, although a cool version of Superman, The Eradicator was probably the weakest one of the four, storywise.  I liked his look, but wasn’t really invested in the character at all.

And last, but certainly not least, is Cyborg Superman, aka Hank Henshaw.  The last time we saw Hank was when Doomsday came barreling out of the Boom Tube, and destroyed his ship, killing Hank’s wife Terri, and the rest of his crew.  We eventually learn that Hank blames Superman for everything that happened, because he wasn’t there to save them.  Patrick Fabian does such a fantastic job portraying this character.  He’s able to channel the hate and really make the audience feel it through his dialogue, which isn’t always an easy thing to do.

And I can’t talk about all of these characters without mentioning the Man of Steel himself, Superman, voiced perfectly by Jerry O’Connell.  I was so thrilled when he finally returned and we saw him in the black suit with the “Super-Mullet”, as someone in my theater shouted out.  Although, to be completely honest, it was weird to see Superman use a gun.  It almost felt wrong, in a way.

The characters weren’t the only things great about this film, though.  Clocking in at 87 minutes, the writing team of Tim Sheridan and Jim Krieg managed to tell a great version of this story while also adding in some details to tie it into the overall DCAU continuity.  The addition of Darkseid as the reason Doomsday came to Earth and as the one behind Hank Henshaw becoming Cyborg Superman was a great way to tie everything up and link this almost two decades old story into the New 52 inspired film line.  I never thought they’d go outside of the New 52 storylines, but I’m so glad they did, because now they can really build this connected universe into something special by bringing in some of these big DC event stories. (Can we please get a “Blackest Night” two-parter)

Overall, I really enjoyed Reign of the Supermen, and felt it fit perfectly with The Death of Superman.  This is absolutely a must see for any DC fan, as it provides a pretty faithful adaptation of this classic story, while putting just enough spin on it to weave it into the DCAU.  Be sure to pick this one up when it comes out.

Reign of the Supermen will be released on digital on Jan. 15, and on DVD and Blu-ray on Jan. 29.