Review: Adventures Of The Super Sons #11

Review: ADVENTURES OF THE SUPER SONS #11 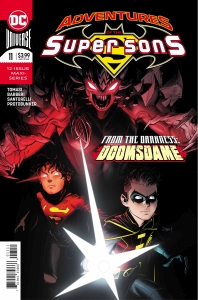 Adventures of the Super Sons #11: Superboy and Robin have been chased through the galaxy by Rex Luthor and his band of murdering minors…and at last the final battle has begun! Using the Dimensional Cube and a brand-new, shiny army of prison planet escapees, Rex has opened the portal to Earth to start his invasion! But Jon and Damian have an army of their own, and when you’re backed by a cybernetic cowboy, an intergalactic ride-share program and several hundred “planeteers,” how could you not put up an epic fight?!

Adventures of the Super Sons #11 is the penultimate issue of the series, and as such, the threads are coming together. Many of the enemies and allies Robin and Superboy have met over the past ten issues have come together for the final confrontation between the Super Sons and Rex Luthor’s Injustice Army.

Surprisingly, this includes the older versions of Damian and Jon that the boys encountered in the House of Secret Mysteries. The previously imaginary doppelgangers now have a continued existence due to Tommy Tomorrow’s Miracle Machine. Like many of the characters introduced in this series, it might be interesting to see them pop up elsewhere in the DCU in the future.

I was happy to see that Space Cabbie is alive and well, having brought the Super Sons some backup in their battle with Rex. This also includes Joker Jr., who would also make an interesting character to bring back in the future. It would be an interesting to see the continuing adventures of a good (or at lest not evil) version of the Joker. Plus, I can’t help wondering how the real Joker would react if they ever came face to face.

I find that this version of Tommy Tomorrow is something of a fascinating mystery. I am guessing that like previous versions, he is from the DCU’s future rather than the present. The fact that his outfit is adorned with remnants from several members of the Justice League would seem to back that up. I can’t help but wonder how he came by them. Also, its an intriguing puzzle that he adorns himself with the League’s symbols but has no idea who the Justice League are.

We also see that Rex’s army includes junior versions of some powerhouse villains, including Doomsdame, Bane Jr., and Kid Chemo. It is clear that Tomasi, Barberi, and Santorelli are having a ball creating these ersatz DC villains. And as a longtime fan, I’ve been having just as much fun trying to identify them.

The only drawback is that there is only one more issue left after this. Tomasi’s two Super Sons series and his run on Superman have been two of the Rebirth era’s best books. While Damian appears in Tomasi’s current run on Detective Comics, it will be sad to see this title come to an end.

We do have the very good DC Zoom Super Sons books, it isn’t quite the same, as they are different characterizations of the characters (especially Damian) in a very different world. Hopefully, DC will see fit to bring Tomasi’s Super Sons back in the near future.

It’s almost over, so buy and enjoy it while it’s still here. This series may be the last we see of Superboy and Robin as they have appeared through the Rebirth era. And if for some reason you haven’t been following this series so far, you won’t regret hunting down the back issues to get caught up.