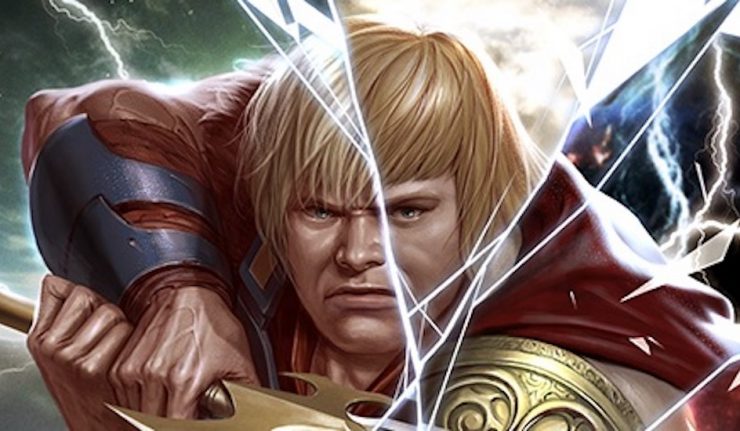 The magic of Castle Grayskull is being threatened on all sides as a crisis comes to Eternia in a new Six-Issue Limited Series that blows up multiverse and introduces He-Man and the Masters of the Multiverse!

In a huge week for fans of the Masters of the Universe franchise, on the heels of an announcement that Netflix and Kevin Smith will be teaming up to realize a “sequel” series exclusive to the network, DC and Mattel also flexed their mighty muscles and reveal that the two imprints will be once again uniting to bring more adventures from the world of Eternia. Coming in November He-man and the Masters of the Multiverse an all-new 6-Issue Limited Series opens up the world to infinite possibilities.

Written by Tim Seeley with art from Dan Fraga and Richard Friend, this latest installment to the franchise is sure to reach new levels of excitement! The story arc also appears quite timely and daresay familiar, as a new threat is unleashed called “Anti-Eternia” and it could mean doom for the multiverse — at least the “multiverse” in relation to the inhabitants of the Masters of the Universe, universe. The story will see “He-Man” from across the multiverse coming together to fend off the dangerous invasion, enlisting the help of an unlikely individual.

Depending on which storyline fans have followed over the years, many will acknowledge Prince Keldor, the man that would become Skeletor, the last person that might be able to save the multiverse — if not reshape it in his own image. Hank Kanalz, SVP of Publishing Strategy for DC is very excited about the prospects for the new series. “DC knows what it means to showcase characters from across its own multiverse,” he said. “I’m looking forward to seeing the different iterations of He-Man and other Masters of the Universe in this series.”

Looking to compete in the wide-open market, Mattel first introduced the world to He-Man and the Masters of the Universe in the early 80s, although the toy manufacturer had been working on its line of action figures for boys for more than a decade. The figures which were based on a muscle-bound collection of pre-historic warriors, mixed with steampunk-like science fiction and magic at their disposal, quickly became one of the most popular lines of must-have collectible figures. An equally popular cartoon show followed; each figure was packaged with a comic book as well.

Although the property has changed hands over the years, DC Comics has remained close to the brand especially in the publication of several connected series of comics, the most recent crossover featured characters from DC’s Injustice story arc. This will be the latest and most recent revisiting to the world of Eternia with much more from the Masters of the Universe coming in the new season.

He-Man and the Masters of the Multiverse and all-new Six-Issue Limited Series will debut in November and will be written by Tim Seeley, with Dan Fraga and Richard Friend providing the art. The 32-page debut issue will be out November 20 and is priced at $3.99.

Tags:@Masters@MastersOfficial@MastersoftheUniverseDCcomicsHe-Man and the Masters of the Universe
share on: FacebookTwitter Tumblr
previous article
Greg Capullo Re-Signs with DC Comics
next article
Heath Ledger’s ‘Joker’ Is Number One