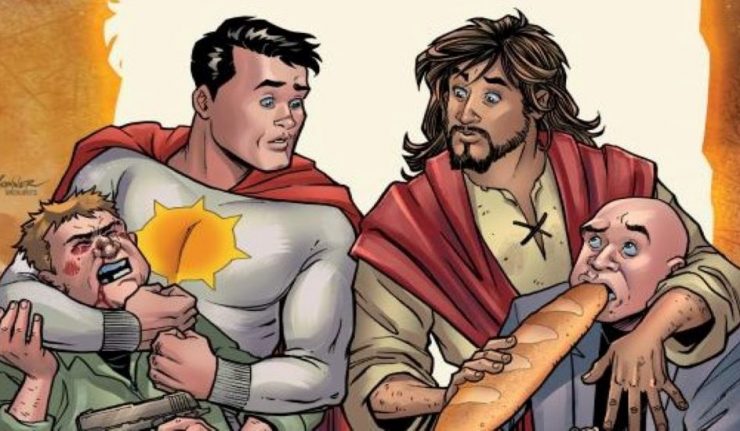 Second Coming begins with Jesus telling readers the story of his father. You know God. He recounts Adam and Even and the aftermath of being kicked out of the garden. We then see Jesus decide to come down to earth and become a human. We meet Mary, Joseph and Jesus’ childhood pal Shimon, whom learns to be a carpenter from Jesus himself. We see his ultimate demise. God pulls Jesus out of earth and refuses to let him go back because he does not like how humans treated him.

Cut to Earth, 2000 years later (so roughly 2033), where Sunstar, an alien protector, who has fallen in love with a reporter, keeps earth safe. Being an alien is a bit of a problem for him. He can’t have a baby the old fashioned way with his one in particular and, his alien status makes adoption problematic. Things are not great.

Jesus convinces God to let him come back to earth. God decides to let Sunstar mentor Jesus as he is much more of punish first and ask questions later kind of hero cut from the same cloth as Old Testament God himself. He thinks Sunstar can toughen Jesus up.  Hilarity ensues.

Where to begin? Mark Russell is a satirical mastermind. This is a fact. There is so much to unpack in this series, but let us just focus on the fact that Sunstar is a resident alien. What does that mean? No matter how much good he does, it does not matter. He is not even human. In this case, it is true, but the commentary by Russell is spot on. He has never shied away from holding up a mirror to humanity, and this simply sub-plot to this book is a perfect example of the fact that he is unafraid of being honest.

Richard Pace and Leonard Kirk a fine line to walk here. People have ideas of how Deities look. They have to be true to that, while not creating caricatures. They do this perfectly. They also have a lot of fun. I don’t think it is a good idea to show the image here, but when you see the fruit on the tree of knowledge, make sure you don’t have a mouth full of water as a spit take will happen. The visual gags never stop and the book is better off for that.

There is also something clever happening with the way Sunstar comes across. We are used to seeing superheroes be totally jacked. Every muscle is clearly defined to the point of absurdity. This is not the case here. Sunstar looks like a guy. A fit guy for sure, but just a guy. Think the Christopher Reeves Superman. I would not be surprised if he were not the model for Sunstar here. I suspect his “every man” appearance will come into play down the line.

There is a good chance this book will offend someone. They know already.

Second Coming is essentially perfect. The jokes land. The art is beautiful. Pace and Russell took a stand and were willing to do what they thought was right. DC did right by them by giving them this whole series back. Ahoy was right to give it a chance. It was a nice touch for Russell to have the note in the back of this first issue explaining his intentions with this book. Run. Do not walk.