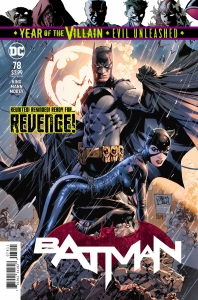 Batman #78: In the first part of a “City of Bane” interlude, Batman receives help from an ally he thought he had lost for good: Catwoman! Still recovering from the beatings he took from Bane and Flashpoint Batman, the Dark Knight readies himself for a return to Gotham City, and it’s Selina Kyle who holds the key. She knows how Bane is fueling his regime, and she’ll help Batman shut down the supply line—but first she has to whip the battered hero into shape.

One of the central elements of Tom King’s run as the writer of Batman is the story of Bruce and Selina’s relationship – the story of the Cat and the Bat. This is one of the oldest relationships in comics, with Selina making her appearance in Batman #1 in 1940. This is something that King and Clay remind us right on the first page, showing a panel right out of that story, complete with the original dialogue.

King gets a lot of hate due to the infamous wedding issue, which ended with Selina leaving Bruce at the altar. Many fans were thrilled at the prospect of the marriage, and King broke their hearts nearly as badly as Selina broke Bruce’s.

But, as King noted at the time, the story was only half over. King planned the story of the Cat and the Bat to span a hundred issues, and the wedding issue was only #50. And we also found out that their breakup had been orchestrated by Bane, whose plan was to not only break Bruce physically, but emotionally.

The breakup left a lot unresolved between Bruce and Selina. But now the Cat is back and the two have to come to terms and figure out what their relationship will be going forward. As Selina helps Bruce retrain his body, the two explore their feelings.

There is some initial distance between them. We see them talking in bed, but they are in separate bedrooms talking through the wall. And despite much flirting, Selina hesitates and backs off from a kiss. 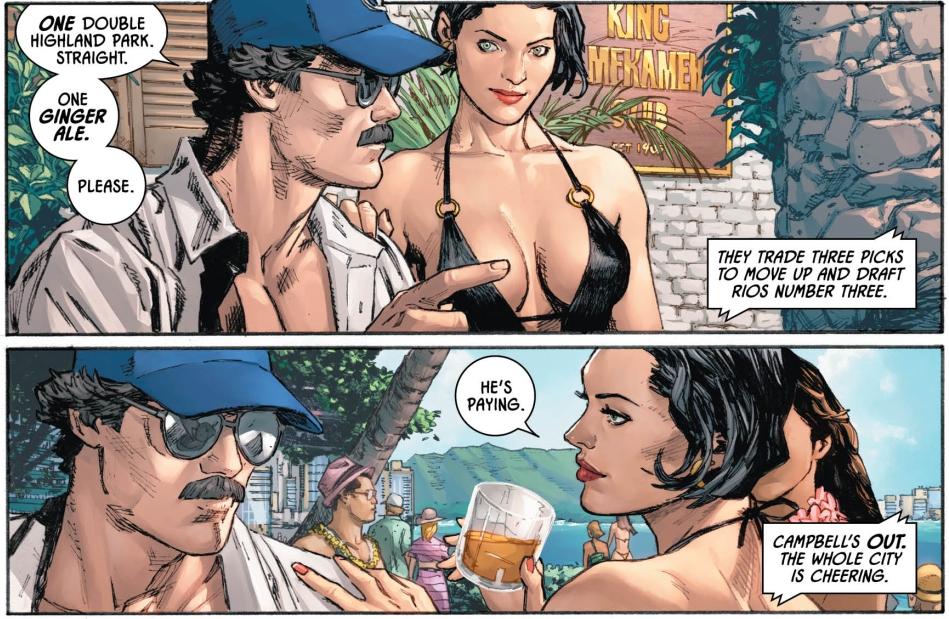 And King shows us a very different side of Bruce Wayne in this issue. The last thing I expected to see was a Batman comic where the major conflict was Bruce opening up about his feelings. When Selina tells Bruce that she wept after leaving him, he tells her “I wept too.” There is something deeply touching when someone as stoic and strong as the goddamn Batman confesses that he has been brought to tears.

The breakthrough comes when Selina tries to get Bruce to lash out in anger at her, feeling that she deserves it for what she has done to him. But Bruce never blamed her. Bruce has finally come to the realization that he doesn’t need to be alone to be the Batman. And he doesn’t want to be alone, telling her “My world is dust… without you.”

There are also some nice references to Batman history in the book. Bruce and Selina are registered in their hotel as Mr. and Mrs. Malone, referencing Bruce’s longtime undercover persona, Matches Malone.

Also, Selina talks of imagining a future where her and Bruce had a daughter. “So much like you, it was almost annoying. Always sullen. Trouble making Friends. Forever trying to help anyone. But every now and then nicely rebelling, seeing the rules for the chimera they are.” It sounds very much like she’s describing Helena Wayne a.k.a. the Huntress, the daughter of the Golden Age Batman and Catwoman.

Batman #78 is a near perfect issue. I can’t find any fault beyond the fact that we had to wait so long for Bruce and Selina to get back together to sort their feelings out. 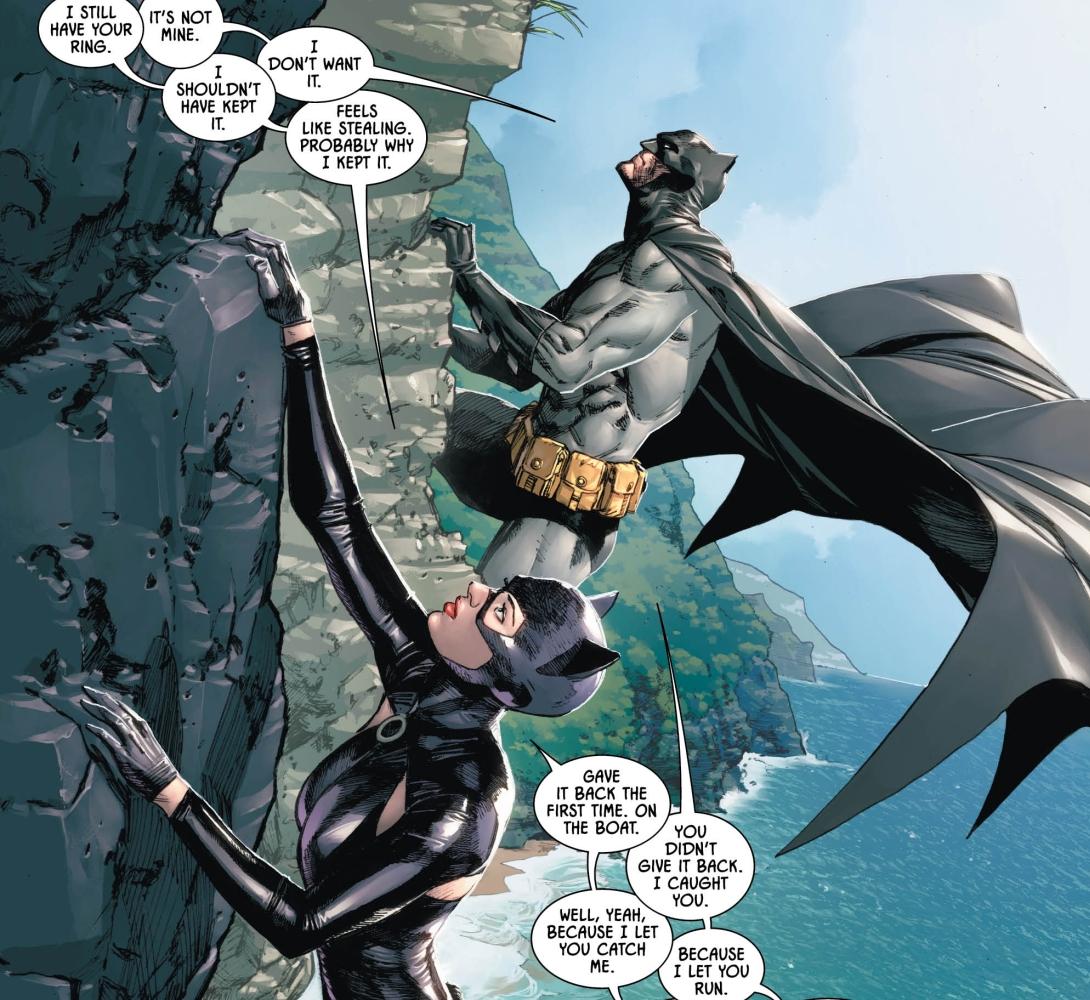 Like a lot of fans, I too felt betrayed by the wedding that didn’t happen in issue #50, but I was willing to continue following the story, trusting that King knew what he was doing, and I am glad that I did, as this story was truly heartwarming. It’s especially good to see Bruce find some measure of momentary happiness, especially knowing the heartbreak that is looming when he discovers what happened to Alfred last issue.

Review: The Riddler: Year of the Villain #1