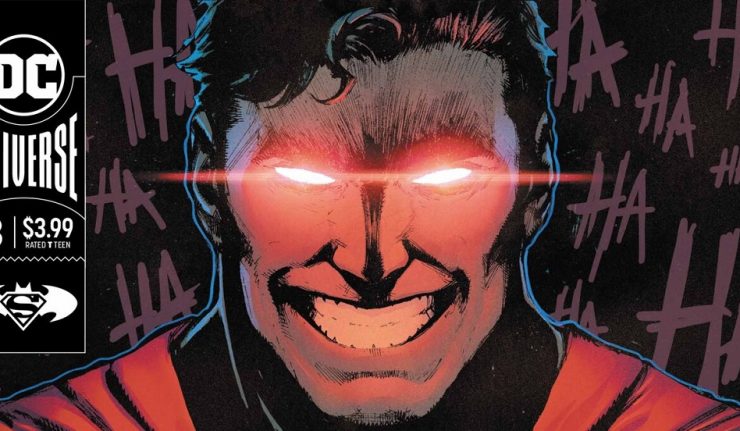 “I might be locked away, but I can feel each piece of my puzzle coming together!” – The Batman Who Laughs,

Batman/Superman #3:  Up in the sky, in the dark of the night, trust no one – for the infected walk among us. Spinning out of the devastating events of THE BATMAN WHO LAUGHS, Superman and Batman are together once more in an all-new monthly series – and they’re facing a terrifying new threat that could strike from anywhere.  It’s Batman/Superman #3! “Who are the Secret Six?” part three! Is Superman the newest member of the Batman Who Laughs’ Secret Six? It certainly looks that way, and Batman may be powerless to stop the Man of Steel and his own demented doppelgänger. The Dark Multiverse’s most dangerous Bruce Wayne is loose in our world, and he has our world’s greatest superhero at his side. Who do you turn to when there’s no one to trust? Joshua Williamson and David Marquez plunge us deeper into discovering an even bigger plan by The Batman Who Laughs.   Another member of the Secret Six is revealed in The Batman Who Laughs plan.  James Gordon…. Shazam….Blue Beetle…. And eclectic group  that makes no sense, but what does in this Dark Metal Knights rationale?

The TBWL’s serum is pumping in Superman’s veins.  The stakes are high if Batman is allowing Clark to be an actor in the scheme to find out what the motivation is behind TBWL’s plan.  But the Big Blue Boy Scout is too obvious in his inquiry.  Clark is good at being Clark, but pretty poor in his acting ability.  But can TBWL push some buttons on Clark.  What a strong script by Joshua Williamson. Part Joker and Part Batman, TBWL shows why he is an even worse version of the Joker in his reference to Clark’s Kryptonian parents.  And why TBWL is such a good detective…the smell of lights provides a clue as to his being in a hologram world.  Geesh.  The man in the mirror is a tough one to crack.

Williamson’s writing provides the psychological warfare that is beyond belieft.  Dark references to both Clark and Bruce’s parents.  And when James Gordon tells Batman he is a failure to the city!  The look that David Marquez gives him is priceless. I love the fact that DC is going back in its vault for these new crises and yanking out Blue Beetle.  And why not?  There has been far too much focus on Batman, Superman and Wonder Woman.  TBWL is shaking all things DC down to its core! Trojan Horse…Nanobytes….Blue Beetle.  A curve ball out of the past and a new signal in the sky. Again, the baton has been tossed from Jock and Scott Snyder to Joshua Williamson and David Marquez.  And we are the benefactors for it!

It took a couple of readings to see how Bruce administers an antidote to Clark – a kryptonite needle.  WIlliamson has thought of everything.  No negatives as this is a great story.  Something Old…Something New….Something Borrowed..And Something Blue….Blue Beetle! And I really really really wanted to see Shazam again!  However, if you want to see where he is, Check out Year of the Villain:  Black Adam #1.  Wow!  I underestimated Black Adam all these years! Let’s hope the six are coming together fast!

Batman/Superman #3: Where is my change jar?  I used to look forward to buying World’s Finest as a kid.  And while the prices have increased from 25 cent to the current market prices, the work is priceless!   We are inching closer to  the revelation of the entire Sinister Six and TBWL’s plan.  Can it get any better?