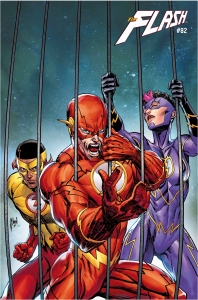 The Flash #82: “Rogues Reign” part one! The speed force is dead, doom has gripped the earth, and the FLASH lives in a nightmare! Powered-up by Lex Luthor’s offer, Captain Cold led his team of Rogues to ultimate victory over Central City. Through the might of Mirror Master’s amplified abilities, the rogues have re-shaped reality itself into their own kingdoms of cruelty – Heat Wave’s volcanic territory, Weather Wizard’s floating armory of the elements, and at the center of it all, the icy castle of Captain Cold. But with the villains stealing the show, why is the greatest threat to their reign one of their own?

Although this issue is in reality The Flash #82, the cover declares it to be Captain Cold and The Rogues #82. The temporary change of title is due to this being a tie-in with the Year of the Villain event, but this is no mere hype. The story inside is indeed mostly about Captain Cold, now calling himself King Cold, and the icy kingdom he has made out of Central City. And there is no sign of the Flash until the final page.

It’s not clear how long Cold and the Rogues have been in control of the city, but it seems to have been for quite a while. Cold has built himself a headquarters called Ice Heights out of the former Iron Heights Penitentiary.

Cold has also changed in another significant way. At one point he declares, “Y’know… used to be I lived by a code. Never kill anyone unless it was do or die. But things change.” Cold used to be averse to killing, but now he has no problem with straight up murder. I wonder if this change of heart is due to the Multiverse now being aligned with Doom. Does this new alignment make it easier for people to make unethical choices? That could have some interesting implications.

We finally get to see Captain Cold and Commander Cold face each other. Unfortunately, the fight ends up being rather one-sided. With the boost in power Snart has received from Luthor, the Commander is easily defeated.

We also see Kid Flash, the Flash of China, and Iris West working as a resistance group against the reign of the Rogues. The speedsters seem to have lost their speed abilities, although no indication is to whether their powers are still cutting out intermittently, or if they have been cut off altogether, but it does hint that the resolution of the “Death and the Speed Force” storyline might have damaged or changed the Speed Force.

But we do learn that Iris has some sort of plan, involving a shard of one of Mirror Master’s mirrors. It will be interesting to see what Iris has in mind.

In the final pages, we see that Ice Heights is still operating as a prison, with three particularly significant prisoners. Fuerza, Steadfast, Trickster, and most importantly, the Flash.

It is significant that three of these are Force users: Speed, Strength, and Still. However, there is a fourth – the Sage Force. With Psych dead, has the Sage Force found an new avatar. Also, the Trickster is the odd one out in this quartet. Is this a hint that Trickster will be the next Sage Force avatar? That would be a fascinating development.

Cold has been keeping the Flash prisoner, but he reveals that he has let everyone else believe that he is dead. This shows how evil Cold has become. He has secretly kept Barry alive and imprisoned for the sole purpose of lording his victory over his vanquished foe.

This seems a rather abrupt end to Commander Cold. I think that this character has too much story possibilities. On the other hand, maybe that wasn’t really Commander Cold. Iris and the others had one of Mirror Master’s shards. Maybe it was a mirror copy of Commander Cold that was killed. That would explain why he was so easily beaten by Captain Cold.

In the past few months, Williamson has produced some of the best Flash stories we’ve gotten in years. But he’s not content to sit on his laurels, but pits Barry against a new deadly threat. We’ve seen Barry try to stop the Rogues many times, but now we’ll see how he copes when the Rogues have already won. This premise is full of potential and promises to give us yet another classic Flash story.