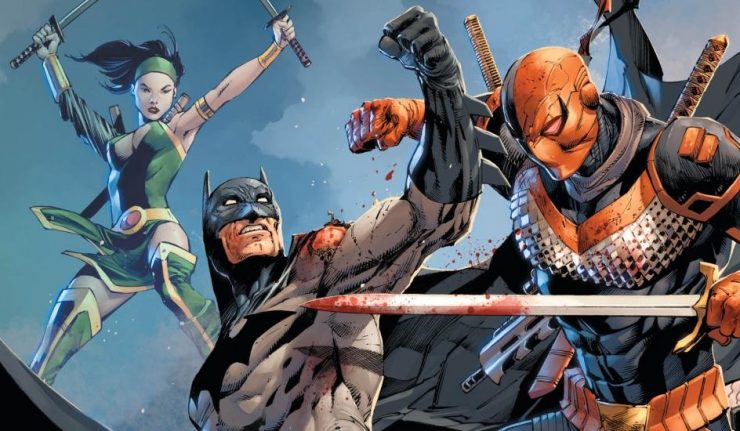 Batman #88: The conspiracy that will rock Batman’s world continues to unfold as the Dark Knight travels to Arkham Asylum to get answers from the Penguin! What dark secret does he share with The Joker, the Riddler, and…Catwoman? Plus, the plague of assassins descending upon Gotham City in its weakest moments continues! Will this be the moment when Deathstroke finally takes down Batman?!

In Batman #88, Tynion gives us a clearer picture of what’s going on. As the Penguin tells Batman, “Four of us. Me. Riddler. Joker. Catwoman. The… Underworld… United. We did this years ago… It’s a shell game.. to beat you. The false targets… they’re still going to die, but they are only there to keep you busy, to keep you from stopping him from reaching the real goal… the perfect crime. The Designer is real. He is in Gotham City. He has one true target. Bruce Wayne”.

The idea that Bruce Wayne is the central target adds a twist to the Designer’s plan. Presumably the Designer doesn’t know that Bruce Wayne and Batman are the same person. But will this fact work prove to be a flaw in the plan, or will it work in his favour? On the other hand, maybe the Designer does know. Tynion’s epilogue to Batman #85 hinted that the Joker knows Batman’s secret identity, but hadn’t been acting on it. Could he have shared this information with the Designer?

Also, the Penguin’s mention of “Underworld United” should sound familiar to longtime Batman fans. In Batman: The Movie from 1966, the same four villains formed an alliance they dubbed the “United Underworld”. This is a nice little nod to the Adam West movie. Perhaps Batman should make sure he’s got some Shark Repellent Bat-Spray in his utility belt and have the Super Molecular Dust Separator on standby.

Also, we see Catwoman digging up the corpse of the Joker But we have also seen him alive in Batman #85. Is this cadaver a fake? Or does this have something to do with the upcoming Three Jokers project coming from Geoff Johns? And generally where does the Joker fit into this story? Will he side with the other villains or with the Designer? Or will he opt to side with the Batman? Ultimately, I suspect the Clown Prince of Crime will prove to have his own agenda.

And there still seems to be a lot we don’t know about the Designer and his plan. It seems particularly ominous. Catwoman appears to be afraid that Bruce learning of her involvement of the plan will destroy their relationship. Bruce knows most of Selina’s criminal activities and is not repulsed by them, so it must be something pretty bad. So bad that even the four villains balked at actually carrying it out. They describe it as the “perfect crime”, but it seems that this crime crosses some line that even the Joker, Penguin, or Riddler didn’t want to cross.

I also loved the idea of the “Batmobile in my pocket”. A device that can unlock the speed limitations of any car with Wayne Enterprises components and projects a hologram to change its appearance to that of the Batmobile. And Guillem March’s design for this Batmobile is gorgeous. It’s totally new, but has hints of the Adam West and Michael Keaton Batmobiles. I would love to get a toy version of this car for my Batmobile collection

It’s still early days yet for Tynion’s story, but he’s introduced a fascinating new story that hasn’t hit any sour notes yet. And given Tynion’s superb work on Detective Comics and other titles, I didn’t really expect any.

It looks like Tynion’s run on Batman may prove to be as much as a classic as King’s was before it. Batman #88 has made it clear that with Tynion and March writing the book, we can expect some superb Batman stories in the months ahead.