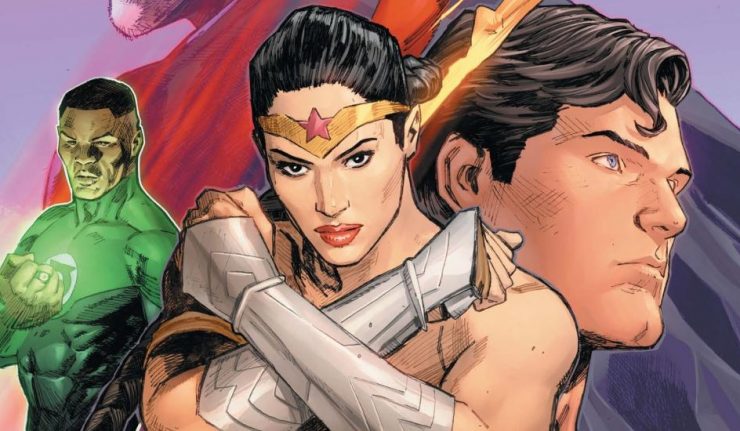 Justice League #46: “Vengeance Is Thine” part three! On Themyscira, peace hangs in the balance when the Justice League is caught trespassing on the island of the Amazons! As the Spectre’s wave of vengeance sweeps across the world, the island is now twisted with rage. In order to quell mass retribution, the team must enter the Pit of Tartarus and find Jim Corrigan, but first they will have to fight their way into it-among each other and with their not-so-gracious Amazonian hosts!

In Justice League #46, the team must follow Jim Corrigan into Tartarus. Unfortunately, the portal is on Themyscira, home of the Amazons. But Amazon law forbids men from the island. In normal circumstances, Diana might get her mother, Queen Hippolyta to make an exception for the League. However, the effects of the Spectre’s vengeance makes the Amazon’s even more hostile to the League’s presence.

Venditti has been giving us a unique look at the Justice League’s leadership during his run on the title. We have seen John Stewart and Batman butting heads over who should be giving the orders before, but John seems to have taken the lead over the last few issues. I find John to be an interesting change as leader. He’s frequently had a leadership role in the Green Lantern Corps, but this experience hasn’t been tapped when he’s with the League. Usually, one of the Trinity is the one calling the shots.

However, John easily passes the role to Diana when they are facing the Amazons. He recognizes that Diana has the most experience and the most at stake and hands her the reins, stating, “Wonder Woman. These are your sisters. Your mother. It’s your call”. And Wonder Woman easily steps into that authority, immediately giving orders to her teammates.

I also find it interesting to see the underlying tensions among the Amazons. Their jealousy of Hippolyta’s preferential treatment of Diana is laid bare. The Amazon’s may be her “sisters”, but it appears that relationship also comes with a fair amount of sibling rivalry.

The team may have expected Corrigan to resist returning from Tartarus. But, instead they find the primordial deity Tartarus himself was using Corrigan as bait to get the team to open the portal to his realm. He declares, “The ancient seal stands open. Tartarus, the first god of Hell, will at last be free”. The League has inadvertently unleashed a deity whose power might rival the Spectre’s on the world. Now the League has two extremely powerful threats to cope with. This promises to be a Hell of a fight.

I have no problems with Venditti’s take on the League. He has given us a unique look into the tensions that exist in the team and presented us with credible threats for the League to deal with. That’s quite a chore, when the previous writer, Scott Snyder, had the team facing universe-shattering threats, but Venditti manages it superbly.

Justice League #46 once again shows that Robert Venditti is doing a fantastic job as writer.  Xermanico and Robson Rocha also did a superb job with the art. I wish he was staying around for the long haul, but I look forward to seeing what he has in store for his final issue.