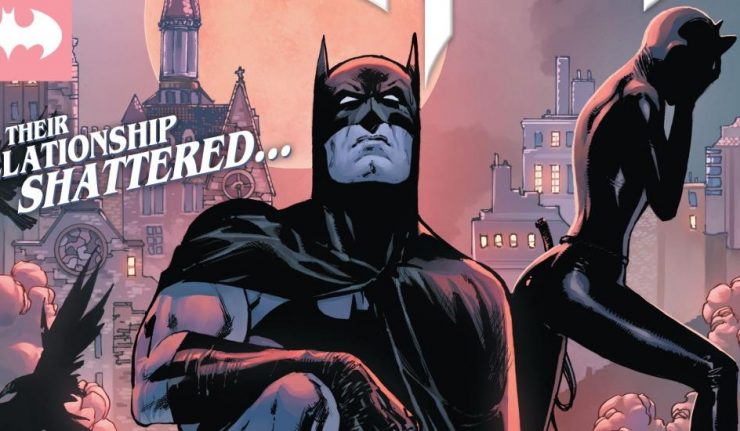 Batman #94: The Designer’s machinations have left Batman’s life in tatters! Gotham City’s ambitious rebuilding has skittered to a halt as new powers are rising to shape its destiny—and Batman is powerless to stop them! With no Alfred or Bat-Family to lean on, the Dark Knight stands alone against the ascendance of his greatest adversary!

I was worried when I first saw the cover of Batman #94, showing the Bruce and Selina and the words “Their relationship shattered”, It certainly looked like Tynion would be breaking up the couple in this issue. Luckily, this seems to have been exaggeration.

The Bat and Cat do get a moment to talk, if only briefly over the phone. While Selina is regretful for having played into the Joker’s plan, Bruce doesn’t hold it against her. He tells her, “If you forgive me… we’ll face what comes next… together. Wait for me, Selina”. Both feel guilty, but they are clearly still in love with each other.

One thing that I love about this issue is the parallels Tynion draws between the events of this issue and the night Bruce Wayne sat in his father’s study and witnessed the omen of a bat crashing through the window. Specifically, Tynion is referencing that night as shown in Frank Miller’s Year One. In that story, in the aftermath of his first meeting with Selina in the street, a beaten and bloody Bruce sits calling on his father, Thomas Wayne, for a sign, which he receives in the form of a bat.

In Batman #94, we see a similarly injured Bruce in a replica of the same study, remembering that night. Guillem March and Rafael Albuquerque have even drawn Bruce’s office to resemble that study. And like Bruce called to his father on that night, on this night he calls to his other father, the man who raised him, Alfred. Bruce asks for a sign on how to continue as Batman.

And where Bruce once said, “Yes, father. I shall become a bat,” he now declares, “Yes, Alfred… I will become a better bat”. It seems that Tynion is about to introduce an evolutionary change in Batman’s approach to crimefighting. I can’t wait to see where this is leading.

I was also intrigued to see that we learned a bit more about the Designer. In a flashback, we find that his name was Cassander Wycliffe Baker. We also learn that a young Bruce Wayne considered him “the greatest detective n the world” and wished to study under him. It looks as if the Designer may continue to be a significant part of the story, despite having died years ago.

This issue is near perfection. I couldn’t even find any tiny nits to pick with the story. Even if there were, they would be too inconsequential to bring up in light of the stellar story.

In Batman #94, Tynion, March, and Albuquerque have done a fine job in wrapping up the current storyline and leading into the Joker War event. With the Joker in possession of the Wayne fortune and the Batman’s secrets, Bruce has the fight of his life ahead of him. If this issue is any indication, the Joker War is going to be the comic story of the year.