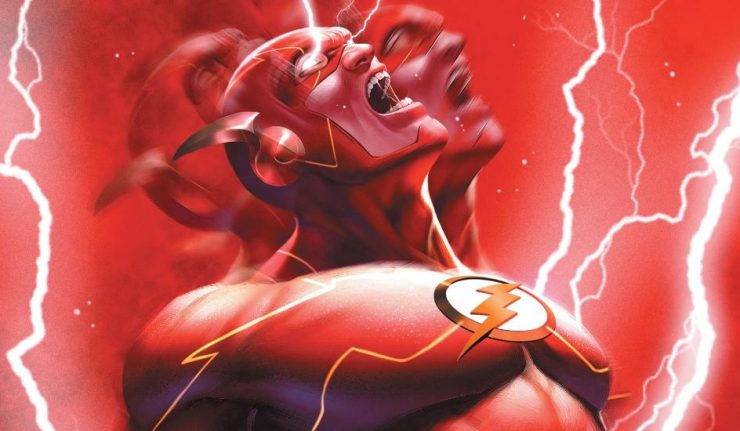 The Flash #757: “Legion of Zoom” part one! As the Flash’s greatest enemies-Gorilla Grodd, the Turtle, Trickster, and Captain Cold-attack Central City at the same time, the Fastest Man Alive finds he’s not fast enough to stop them all or save everyone in danger!

Last issue, Iris dropped the revelation that the Flash intends to kill Eobard Thawne, the Reverse-Flash. The Flash #757 starts off showing Barry do just that. However, this is Barry reflecting on the events of The Flash #324 (1983). That issue featured the first of what would become many deaths of Eobard Thawne.

However, there is something odd about Barry’s recollection here. Here Barry appears to be deliberately killing Thawne and he states that he can “still hear the sound when I close my eyes”. But in the original story, Thawne’s death was accidental and Barry didn’t realize that Thawne was dead immediately. This could be due to shifting continuity changing how that story actually played out. But could it be that Barry’s recollection of events is coloured by his current state of mind? Or worse yet, did Barry actually deliberately kill Thawne, but has been repressing that memory? Has Barry been deluding himself into believing Thawne’s death to be accidental?

But Barry doesn’t have too much time for introspection, as he quickly finds himself under attack from Thawne’s Legion of Zoom. The Reverse-Flash’s forces simultaneously attack people and places that are important to Barry. Barry manages to get Iris, Wallace, and Avery to safety, but he still has to contend with concurrent attacks on multiple fronts. As Iris explains to Barry, “He’s attacking your life on every front, so you’d second-guess yourself! You need to run. Damn it, Barry, run!”. But Iris is not exhorting Barry to flee, but rather to run to action.

I find that there’s an interesting parallel between the this story and the situation Batman finds himself in the Joker War event. Like Barry, the Batman is faced by his arch-enemy – the Joker in Batman’s case. Both enemies are armed with knowledge of the hero’s secret identity, and are using that knowledge against him. In both cases, it appears that both heroes are having the ultimate showdown against their greatest foe. It will be interesting to see the differences and similarities as both stories progress.

Once again this issue is nearly flawless, both in Williamson’s writing and in the stellar artwork of Sandoval and Tarragona. There has been no sign of slacking off in quality as Williamson works his way towards the end of his run. If anything, it’s getting more exciting.

The Flash #757 is another stellar effort from Williamson, Sandoval, and Tarragona. The title is clearly building to major confrontation in the coming months. This is going to be a hell of a summer for the Flash!