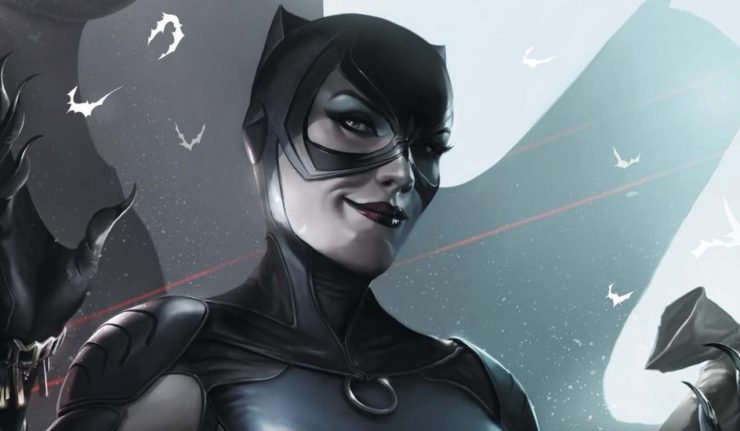 Batman #96: Reeling from the effects of the worst Joker toxin attack ever, Batman is on the run through Gotham City, pursued by the dark shadows and voices that haunt his past and present! As the Joker’s plan materializes, the only person who can save Batman from the brink of true madness…is Harley Quinn?! Plus, who is the mysterious new figure known as Clownhunter?

Batman #96 starts off with a scene of Batman in action in his shiny new Batsuit. At first this seems to be a vision of the future. Batman confronts the sons of Mr. Freeze, Bruce has greying hair, and Alfred appears quite elderly. Wait how can Alfred be in a future story when he’s dead in the present? It turns out that this idyllic scene is a nightmare brought on by Punchline’s gas.

It appears that Punchline’s chemicals are causing Bruce to hallucinate the voice of Alfred, as if Alfred were still guiding him from the Batcave. I find it interesting that although Bruce is aware that Alfred’s presence isn’t real, he accepts it for the moment. He tells Alfred, “You’re not real, but I can deal with that later”. Is Batman being pragmatic, dealing with more immediate concerns first? Or is he putting off questioning Alfred’s presence because he finds it comforting?

The Joker has clearly set up a confrontation that is designed to attack the Dark Knight on a psychological level. The Joker centres his trap around the familiar Batman origin story. He advertises a showing of “The Mark Of Zorro” at the Monarch Theatre. His description of the movie is especially chilling, “Only three people saw the ending last time, and it changed the course of this city’s history. What happens when everybody sees the real ending”. Clearly this refers to the murder of the Waynes in the alley outside the theatre. But by saying that everybody will see the real ending, is he threatening to reveal the Batman’s secret identity? Or is he implying that everyone in the city is going to die?

It’s also quite an interesting reversal seeing Harley fighting to keep Batman sane. For once, Batman is the one who is not in his right mind, and Harley is the one trying to keep him lucid and grounded. Previously, when they’ve had to work together, it’s Batman that has to try to keep Harley focused on the task at hand.

We are also briefly introduced to a new character called Clownhunter. At least, I presume he’s a new character and not someone we already know in a new costume. It’s also unclear whether he is meant to be an enemy or an ally for the Batman. He seems to have little compunction against killing, but this is directly at Joker’s minions and not innocents. I’m not quite sure what to make of Clownhunter yet, but I expect we’ll be seeing more of him as the “Joker War” continues.

Tynion is giving us a story that appears to be the ultimate showdown between the Dark Knight and the Clown Prince of Crime. This is, in itself, a great idea. But it leaves me wondering what will be left for future writers to add when they pit Batman against the Joker in the future. However, I am sure that future writers will find some new angle or facets of the character to base a fresh take on.

Batman #96 is a clear example of the great job Tynion has been doing on Batman. Not only am I looking forward to reading the rest of his “Joker War” storyline as well as afterwards. This may well turn out to be the definitive Batman vs. Joker story of the modern era.