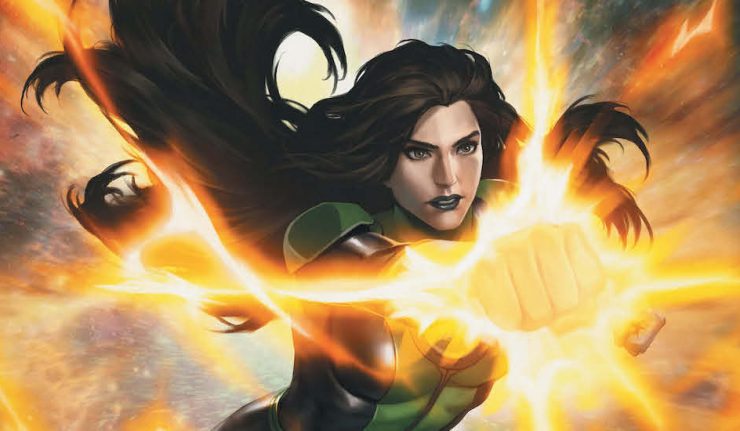 Jessica Cruz is back from her time-traveling detour and she has a bone to pick clean with the guy who sent her there — Epoch, Lord of Time. The Eskaton faces off with Darkseid, but amidst the chaos and bone-rattling battling a sinister figure also seeks an audience with Epoch.

Everything about this book usually begins and ends with Jessica Cruz. But her arrival is only part of this story. In fact, it actually feels like more of a distraction, if not a diversion. The action occurring with her and on the other main stages still serves a purpose. One that will continue to reveal its relevance in the upcoming chapters.

The arrival of Jessica is outshone by the thorough pummeling that the Eskaton is laying down on Darkseid. However, Darkseid is — able to hold on long enough to overcome his ancient nemesis. The look on the faces of Blackfire, Orion, Gamma Knife, and Dex-Starrr is priceless. But, the brawl takes its toll and a still weak Darkseid commands his troops to capture Epoch’s revision machine while their lord recovers.

Victor Stone is starting to speak English again. Darkseid’s hold is weakening and he can sense it. Jessica senses it also, and she wants her friend back. Their exchange is wonderful and heartfelt.

Meanwhile, the arrival of a betrayer revealed begins with the legendary murder-mystery line that goes, “Oh, what are you doing here” and usually ends with something ominous. The usage of viewpoint and the decision to hide the identity of the off-page character is a masterful whodunit homage.

The recent announcement that Justice League Odyssey will be coming to an end makes it feel like this story will have to cover a lot of ground in a short amount of time in order to address the many plotlines currently in the works. The bigger challenge remaining is how important this story is to the development of the larger story from which it was originally spun.  While it has been a great story to reveal just how important Jessica Cruz is to DC Comics, the Justice League, and teammates like Vic, Kory, and even Jean-Paul.

One story coming to an end is always the beginning of a new story. It just is. Darkseid’s ability to survive the Eskaton means that there are many more stories left to tell. The current twist at the end of this issue will no doubt lead to more conflict, but the goal may now be less about destroying Darkseid and instead focus on stopping the more pressing threat that has taken on greater importance.

Justice League Odyssey is charging to a great finale. I don’t care how much of the original mission remains incomplete. If Jessica and her motley crew can stop Darkseid and rescue her friends, then the next issues will be a wonderful ending to this chapter.