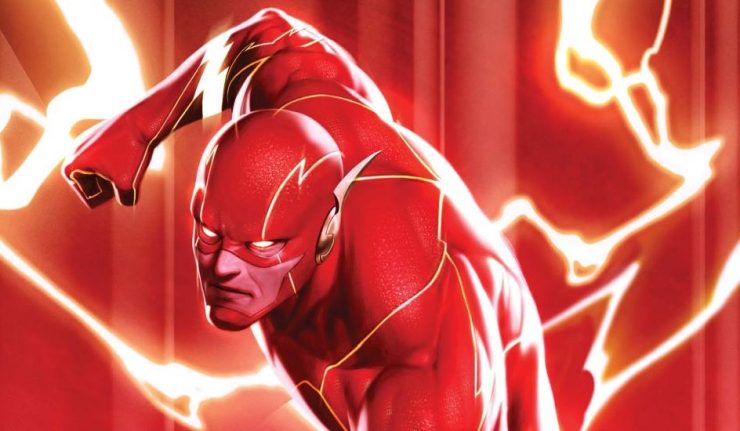 The Flash #760: “Finish Line” part two of six! After years of manipulation, the Reverse-Flash has at last destroyed the Flash Family! But they aren’t going down without a fight as they race together to save the soul of Barry Allen! Can the return of allies from the Flash’s past be enough to stop the Reverse-Flash?

In The Flash #760, Barry is still trapped in the Speed Force with Max Mercury and Jesse Quick, while the rest of the Flash Family faces off against the Reverse-Flash, but he breaks off the fight when Barry starts regaining control of his body.

There are a lot of things I love about this issue. One of my favourite parts is Impulse’s encounter with the Tornado Twins. Longtime readers of The Flash may remember that Don Allen is Bart’s father. When Don rants about their being abandoned by their father, Bart replies, “I know what it’s like to grow up without my dad, but I was lucky to find a family to fill that role! And I never gave up hope that you’d be here with us some day”. With this, Bart breaks through Thawne’s manipulation, getting his father to recognize him.

Unfortunately, as soon as the spell is broken, the twins are whisked back to their future time. It would have been nice if they could have stuck around for a proper reunion with the rest of their family. I have always been intrigued by the Tornado Twins, but we haven’t seen much of them over the years, despite their important place in Flash history. Perhaps DC might bring them back in a future miniseries that fleshes out their story.

And I love that Barry repeatedly demonstrates the hopeful, optimistic heroism that is at the heart of his character. When faced with Inertia, he refuses to fight him, stating, “If fighting a kid is what’s between me and freedom… then I guess we’re not going anywhere?”. Instead, Barry shows empathy and tries to convince him to give up working with the Reverse-Flash.

Barry demonstrates this again when he finally breaks free from the Speed Force, Barry refuses to leave Max and Jesse behind. He tells them, “You’ve been gone from our lives long enough and I refuse to let anyone else be trapped here!”.

And when Thawne rails against Barry hogging all the glory for himself, declaring that “Only Barry Allen can be the Flash”, Barry shows his commitment and appreciation for the entire Flash family by declaring, “That’s what you never understood Thawne. I’m not the Flash alone. We’re the Flash!”. This is paired by a beautiful splash page of the entire Flash Family (almost), courtesy of the talented Christian Duce.

I also loved seeing the joy on Bart’s face when he sees that Max has returned. Max Mercury served as a mentor and father-figure to Max during the run of Bart’s Impulse series. So it’s great that Williamson took a moment to show Bart’s reaction to Max’s return, even if as Max says, “Reunions can wait, Bart. We have some scores to settle.

Unfortunately for the Flash Family, Thawne quickly expands his Legion of Doom to include several more foes of Flash villains, including foes of Barry, Wally, and Jay.

I realize that there is no way to bring Wally into this story, given the timeline between Flash Forward and Death Metal, but I still feel somewhat disappointed at his absence. I hope that Wally returns to his former life at the conclusion of that story, so that we can see a proper Flash Family reunion when the dust settles.

It’s disappointing that Williamson is bringing his run to an end, but “Finish Line” shows that he’s going out with a bang. The Flash #760 is one of the most fun and exciting comics that I’ve read all year.