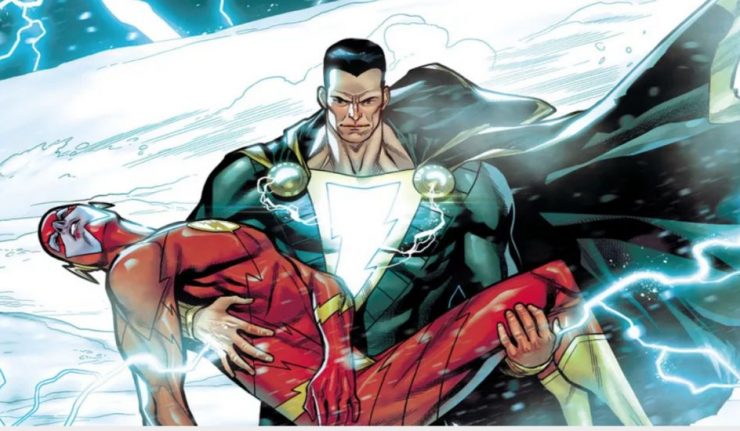 With the Endless Winter event coming in December, DC has revealed new images from the miniseries: the villain Frost King and a team nicknamed “Justice League Viking.”

According to DC’s press release:

“1000 years ago, a disparate group of heroes – Hippolyta, Black Adam, Swamp Thing, and the Viking Prince – banded together to prevent the world from freezing at the hands of the Frost King, an exiled Norse god with the ability to control entire ecosystems. The heroes triumphed, but victory came at a terrible price, one that has been kept secret until now.”

According to series co-writer Ron Marz in the current DC Connect:

“We felt like heroes would band together in every era, and we wanted to show off what we eventually came to call the Justice League Viking. We had to sort out which characters would logically be around in the 10th century, and then figure out how those relationships work. The short version is, not everybody gets along.”

Meanwhile the present day Justice League will battle “the Frost King, his army of ice monsters, and the coming of an apocalyptic, global winter storm.”

Endless Winter kicks off in December and will last nine issues, all written by Marz and Andy Lanning. These include Justice League, The Flash, Aquaman, and Justice League Dark titles.