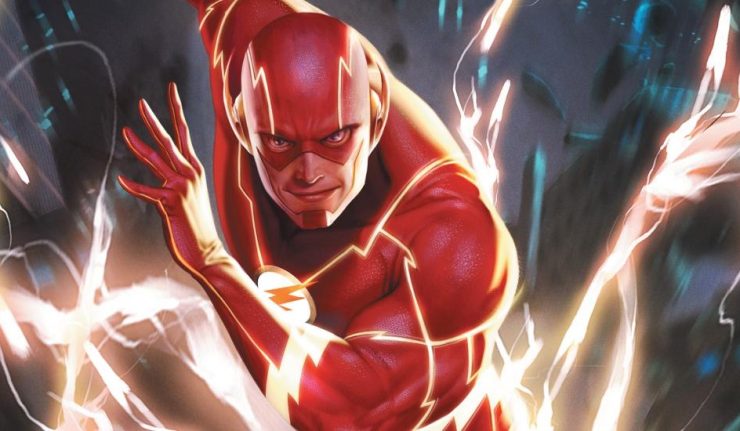 The Flash #762: “Finish Line” finale! Barry Allen and the Reverse-Flash race for the last time in this fast-paced conclusion. For years, Eobard Thawne has tormented Barry Allen, and now the Flash knows the only way to win is to make sure the Reverse-Flash never runs again! The story years in the making comes to a close as Joshua Williamson finishes his epic 101-issue run on The Flash!

And so we reach The Flash #762, Joshua Williamson’s final issue. Williamson has written 101 issues of the book, plus Annuals, a few issues of Batman that it crossed over with, as well as The Flash: Rebirth special that launched this incarnation of the title. This is quite an epic feat.

Williamson’s run on The Flash has a particular significance for me, as the Rebirth special was one of my first reviews for DCN and I have reviewed every single issue of the series over the last four years.

And while Howard Porter provides some gorgeous artwork for Williamson’s final issue, I would like to take a moment to recognize the other amazing artists that have contributed to this title: Christian Duce, Scott Kolins, Rafa Sandoval, Jordi Tarragona – as well as the colourists and Steve Wands, who has lettered the entire series.

Over the span of this series, Barry has been fighting the negativity within himself to regain the hopefulness at his core. There have been many epiphanies and setbacks along the way, but the overall progress has been upward. And with his final issue, Williamson has shown that Barry has won this struggle. Many people people consider Superman to be the heart of the DC Universe, but I would say that it’s really Barry Allen. And Williamson’s epic run has shown that.

This is evident in how Barry defeats the Reverse Flash. Eobard Thawne has been revealed to have inflicted much of the tragedies in the lives of Barry and his family. When it comes to the final conflict, Thawne goads Barry, “Kill me!”.

But Barry realizes that this will just perpetuate the cycle between them. If he kills Thawne, the Reverse-Flash will return again and again, causing more misery each time. Instead, Barry tells his enemy, “It’s time for me to do something different. Something new. Eobard… I forgive you”. Barry further explains, “And it’s my hate for you that keeps me tethered to you. I have to let that go”.

And it is that which frees Barry from that tether, but it’s what comes next that frees Thawne. Barry shares a portion of his Speed Force energy with Thawne, becoming his lightning rod, and resetting Thawne’s past, but as we’ll soon see, not Barry’s.

While this battle comes as the climax of the story, Williamson still has reserved half the book as the dénouement. This might be a bit much under ordinary circumstances, but considering he’s capping off a story spanning more than 100 issues, it barely seems sufficient.

Barry then makes a trip through various times and places, making sure that all his friends, foes, and family are where and when they should be. Interestingly, it seems that Thawne’s reset has also undone Commander Cold’s death. Perhaps this is because the Commander and Thawne come from the same future era.

Unfortunately, the same can’t be said for Godspeed. Barry’s visit to August Heart’s grave confirms that he’s still dead – or is he? The name appears to blur away after Barry departs. Could this be hinting he might be back?

We then get to see a Flash Family reunion. Everyone who’s returned to Barry’s life in the last few issues is present, plus a few others: Joan Garrick, Linda, Park, Henry Allen, Hartley Rathaway (a.k.a. the Pied Piper), and his now-fiance David Singh.

There are some nice character interactions at this event. I got a laugh out of Jay telling the younger generation, “Okay kids. Say it with me now. No time-travel”.

There is also a touching moment where Barry has a conversation with his mother. I had hoped that this story would end with Nora Allen’s death being removed from Barry’s history. So, I did feel like Williamson was playing with my feelings, when I realized that this wasn’t a reveal that she was alive. Instead, Barry is imagining a discussion with his mother, before laying her memory to rest.

Barry imagines his mother asking him about his motivations for being the hero that he is. And his response speaks an important truth about Barry Allen, “I never put the costume on because of any suffering or tragedy. It’s simple. I’m the Flash because of what you taught me… because it’s the right thing to do, Mom”. The doesn’t act out of vengeance. He does so out of the basic decentness at his core.

Unfortunately, there is one glaring absence at the Flash Family reunion: Wally West. Iris comments on this. However, Williamson has an extra bonus for Wally fans. Coinciding with the release of The Flash #762, DC is also releasing Dark Nights: Death Metal: Speed Metal #1. Even if you aren’t following Death Metal, I urge you to check out Speed Metal, for Barry’s reunion with Wally.

The Flash #762 was a fantastic ending to an epic run by Joshua Williamson. It’s no exaggeration to say that Williamson has done for Barry Allen what Mark Waid did for Wally West. While I have little doubt that incoming writer Kevin Shinick is a capable writer, he has an extremely difficult act to follow.