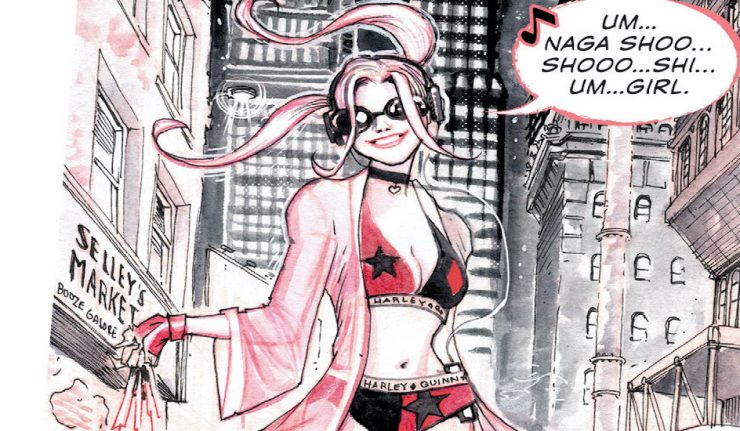 The Joker is a master of many things, but one of them is not the mic. When a mythical recording of the Joker’s disastrous rapping turns up as the grand prize in Gotham City’s most elite rap battle tournament, Harley Quinn enters the contest to win this most excellent way to humiliate her awful ex. But who are Gotham’s fiercest rappers? Can Harley Quinn hold her own? The answers will shock you.

The cover is very cool. I enjoy this David Bowie-inspired jazzercise version of Harley Quinn. It looks great.

The interior art is great. I’ve enjoyed Juan Ferreyra’s work since Green Arrow Rebirth and I was excited to see his name. I love that he only the colors from the title; it gives the book a unique look. Additionally, I love this grunge Poison Ivy design; the tattoos are cool.

This is a fun idea for a story. And I love that what makes Harley good at rap battles is her history in psychiatry. She can read people and find weaknesses fairly easily. She just hones in on insecurities and humiliates her competition. That’s funny and works for the character.

It is funny that the story also revolves Joker being a terrible rapper. I like to imagine it’s Jared Leto’s Joker for my own amusement. It’s cool that this story can just be this weird and fun thing about these two characters rapping. There are really no stakes; the world isn’t ending or anything. It’s just a charming comedy about Harley putting Joker in his place with Poison Ivy as the straight man.

The problem with a music based comic book is that I can’t hear it. I have a hard time feeling engaged in a rap battle when I’m just reading words on a page. Obviously, the words of a rap are important. But flow and rhythm are also important. It ends up feeling awkward when most of the issue is taken up by these raps. Essentially, I’m just reading Harley Quinn recite poetry.

This is a solid issue. It’s a fun premise that’s executed as well as it can be. It’s hard to make rap battles compelling for me when I can’t read them. But, other than that, it’s an enjoyable read with great art.