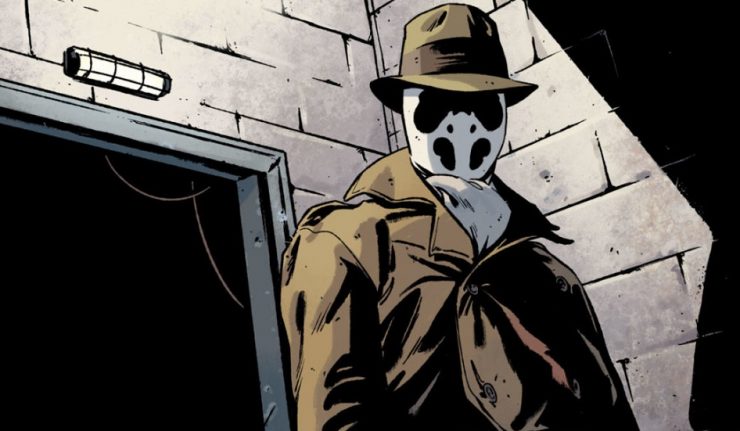 Tom King‘s Rorschach brings back not only the archetypal antihero, but some familiar faces. Briefly.

The DC FanDome “Expansion of The Watchmen Universe” panel discussion centered on the motivations behind the exploration of the team’s most extreme member in the upcoming limited series. During the discussion, excitement was reinforced with the image of the entire team together again.

For one panel of art.

Tom King’s Rorschach Plot – Who, What, and Why?

The original team – Dr. Manhattan, Nite-Owl II, Silk Spectre II, The Comedian, Ozymandias, and Rorshach – have not been seen together since Alan Moore and Dave Gibbons’ original 1984 miniseries. Given The Comedian’s death is what starts the original story, this panel could be a flashback or, perhaps, a hallucination of Rorschach. Still, given Manhattan’s time-manipulating abilities, nothing is outside the realm of possibilities.

DC Entertainment recently made use of Rorschach’s godlike teammate in Geoff Johns and Gary Frank’s “Doomsday Clock” miniseries. In that series, Dr. Manhattan was revealed to be the mastermind behind the New 52 because he envisioned being killed by the pre-Flashpoint Superman. In an act of self-preservation, he used the Flashpoint event as a cover to scale ever hero back in age and development. He even altered Superman’s personal life by having his parents be killed in a car accident, a mistake he corrects at the series’ end. It is also in that series where we see Rorshach’s successor play a pivotal role in the plot.

As to this series, the plot will revolve around the assassination of the President of The United States, and Rorschach II will be at the center of it. King revealed also that Rorschach II’s philosophy will contradict that of his predecessor. Rorschach I based his beliefs on the works of Ayn Rand’s objectivism, resulting in an extreme black-and-white viewpoint on good and evil. Rorschach II, in opposition, leans towards the contradictory line of thought by Rand’s contemporary, Hannah Arendt.

The first issue of Rorschach is due to hit shelves October 13.