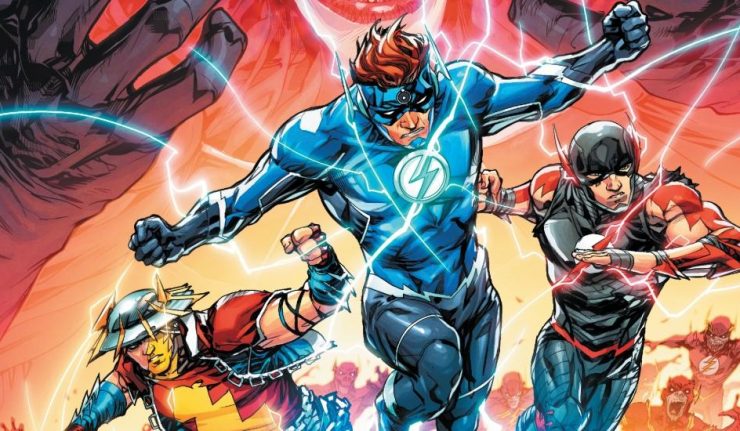 This week, Joshua Williamson has given us his final issue of his epic run on The Flash in issue #762 of that title. Unfortunately, there was one glaring omission in that finale: the striking absence of Wally West. Wally West’s return to the DC Universe marked the start of the Rebirth era. And Wally’s reunion with Barry was the starting point for Williamson’s saga in The Flash: Rebirth #1 special and the relaunched series of The Flash. Over the course of that series, Wally made a few very significant appearances and was frequently referenced when he wasn’t present.

So, why wasn’t Wally in Williamson’s finale? Well, following the events of Heroes In Crisis and Flash Forward, Wally’s story led directly into Dark Nights: Death Metal – which occurs after The Flash #762. However, the amazingly well-timed Speed Metal #1 special. Being set during Death Metal, it allows Williamson to give us an epilogue to his finale – finally reuniting Barry and Wally.

And not only those two Flashes. But the original Flash, Jay Garrick is present. As is Wallace West, the current Kid Flash. The four speedsters run a final race to keep the Batman Who Laughs from attaining the Anti-Crisis energy stored in Wally’s body.

I liked the callback to The Flash #91 (1994). Wally uses Johnny Quick’s speed formula to freeze time, as he once did in that earlier issue. This gives the speedsters time to catch their breath and figure out what to do next. I am intrigued however about the change to the formula as it is shown here. Williamson has changed it from “3X2(9YZ)4A” by adding “=?” to it. In mathematical terms, it changes the formula from an expression to an equation. But does it have any hidden significance?

While this is primarily a Wally story, the focus is on his relationship with Barry. Their relationship has been an odd mix of mutual admiration and rivalry. And thanks to the Reverse-Flash’s meddling, they have both made mistakes that have hurt each other. They truly love each other as family, but have some fundamental differences in their approaches to herodom.

For example, in their current situation, Barry’s instinct is to continue fleeing the Batman Who Laugh’s forces, but Wally’s plan is to face them head on.  Wally tells his mentor, “You taught me a lot and one of the main things was we don’t run from danger we run to it”. After they hash out their differences, Barry comes to realize the wisdom of Wally’s plan.

However, from this point, the team of speedsters shrinks as they use up their reserves of the Speed Force. First Jay, then Wallace, leaving just Barry and Wally as the Speed is nearing full depletion. But Barry shows his faith in Wally to finish their mission by giving his remaining reserve of Speed Force energy to Wally. He tells Wally, “For years, I led and you followed. Even when I was gone that’s how it was. You might be faster, but I was always the leader… You could have stayed behind me again in my shadow. But you chose your own path. That’s why I know you can do this”.

With this added speed, Wally manages to steal away the Mobius chair from the Batman Who Laughs, as he and the chair are both pulled into the Speed Force. I quite like the irony that in this topsy-turvy Death Metal DCU, the Speed Force is now no longer a prison, but a refuge for the Flash Family.

This leads to my favourite part of this special. There was a literal Flash Family reunion in The Flash #762 and although it was a happy occasion, Wally’s absence hung like a shadow over it. But in the Speed Force, Wally reunites with the family, who have all sought refuge there. Finally, the Flash Family is once again complete. And I especially loved seeing Wally reunited with his wife and children.

I also found it interesting that Iris and Linda are somehow present. Despite neither of them having powers, Wally has managed to pull them into the Speed Force as well. Perhaps it is his master of the Speed Force that allows them to survive, or it’s because due to the power of Doctor Manhattan in his possession.

I also have to applaud the fantastic artwork of Eddy Barrows and Eber Ferreira. It was great to see their renditions of the classic Flash uniforms – especially when we get to see Wally back in his red costume from the 90s. While his Rebirth costume has grown on me, I have missed his classic Flash uniform.

I do have to question why Impulse was not included among the quartet of heroes starring in this special. Jay, Barry, and Wally certainly belonged in the story as the foremost heroes that have borne the mantle of the Flash. But Bart was a Flash also, if only briefly. He was also a Kid Flash, so deserved a major role in this story as much as Wallace. For that matter, Wallace didn’t really contribute all that much to the story. Perhaps Williamson should just have narrowed the focus to the three primary Flashes and not included Wallace in the main group either.

Dark Nights: Death Metal Speed Metal #1 was a beautiful epilogue to Williamson’s epic Flash saga. While “Finish Line” nicely finished off his Barry Allen story, Speed Metal brought that story full circle. Williamson’s epic tale both begins and ends with a focus on the strong bond of friendship between Wally and Barry. As a fan of Williamson’s run on The Flash, this week has made me extremely happy, but also saddened that he has reached the end of his time as caretaker of the Flash mythos.