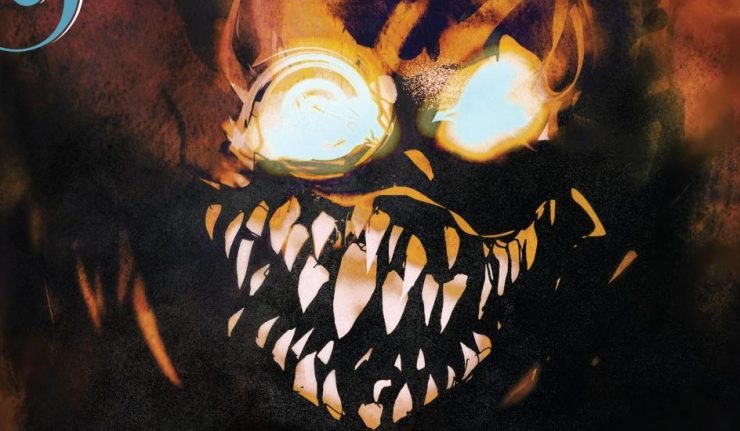 The Dreaming: Waking Hours #2: New mother Lindy is trapped in the Dreaming, and the lovestruck nightmare Ruin is loose in the real world. Dream must put this situation right – but to do so, he’ll have to travel into the Black Chest where he keeps his most dangerous nightmares…and pull the answers right from the mouth of the unimaginable Endless Teeth!

The Dreaming: Waking Hours starts filling in the backstory of Ruin, telling of how Dream of the Endless created him. We also learn of how he was teamed with the angel Jophiel to give a nightmare to a specific dreamer. This boy had a “calling”, which would be inspired by this nightmare. However, Ruin became enamoured with this boy, and in an attempt to soften the nightmare, made it much more horrific.

This seems to be the basic nature of Ruin. He is soft-hearted, with good intentions, but he manages to bring ruination when he tries to do the right thing. This makes him rather unpopular with those whose lives he messes up, like Jophiel. However, it makes him a likable and relatable character to the readers.

We meet a new character, Heather, a sorceress living in New Jersey. Heather is already connected to the Sandman story, as her great-grandfather is Roderick Burgess, the sorcerer who imprisoned Morpheus way back in Sandman #1. As the great-granddaughter of Burgess and Ethel Cripps, it would seem that would also make her the granddaughter of John Dee, the Justice League foe known as Doctor Destiny.

I was amused by her reaction to getting involved in the dealings of Dream, who she calls a “fluffy-haired sadboy”. She goes on to say she’d rather have to deal with one of Lucifer’s demons. She would do this with the help of her friend John. I love her rendition of Constantine’s distinct manner of speech, “‘Allo, Heather Luv. ‘Ow’ve you been? ‘Aven’t seen you in aitches. What the matter then?”.

Meanwhile, Lindy remains trapped in a dream with the multiple possible authors of Shakespeare’s plays and sonnets. Ann Hathaway tells her that none of the various  authors can leave the dream until they are able to resolve the question of which one is the real Shakespeare. Lindy decides to settle this argument for them, and as a Shakespearean scholar studying that particular question, she is just the woman for the job.

I am quite interested to see what conclusions Lindy will come to. We already know from his appearances in The Sandman, that the Bard as he is typically depicted is the authentic version. Will Lindy reach the conclusion none of the alternate authorship theories are correct? Also, considering Shakespeare’s involvement with Morpheus, might the Shakespeare in Lindy’s dream prove to be the actual William Shakespeare?

Waking Hours still hasn’t gotten far enough into the story to allow a clear judgement of the overall story. But G. Willow Wilson has given us a tantalizing introduction to the characters and the situation that Ruin has brought about. I haven’t yet seen anything that makes me worried that the story is likely to go off the rails.

In The Dreaming: Waking Hours #2, Wilson’s story is starting to take shape and drops a few more hints at where the story is heading. Wilson’s story is off to a good start, and if she maintains the same level of quality we have seen so far, then Waking Hours should prove a worthy continuation of Neil Gaiman’s classic Sandman saga.