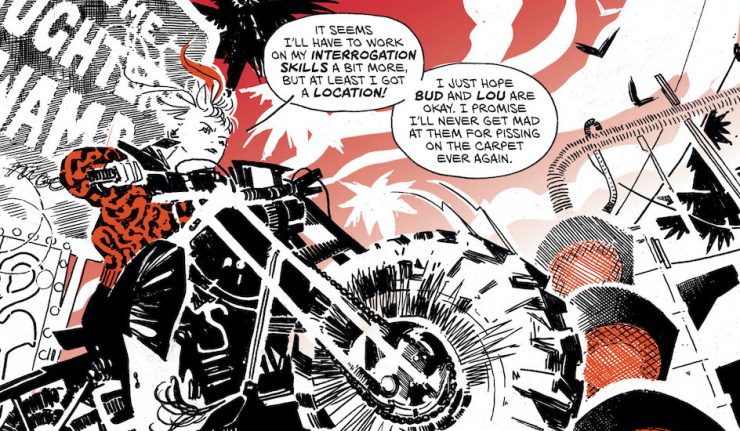 Harley was trying to take a nice and quiet post-breakup vacation into the SLAUGHTER SWAMP, but disaster strikes when a bunch of creeps kidnap her beloved hyenas Bud and Lou. Time for her to put a very particular set of skills to use and kick some ass!

As the summary suggests, this is a Taken-esque story. Someone took her hyenas and she has to get them back. That’s a decent story idea and I enjoyed it. The element that I thought was really strong was the kidnapper’s motivation.

The story takes place after Harley and Joker have just broken up. She rebounded with this guy who became obsessive over Harley. And then Harley went on vacation without saying anything because she probably doesn’t even know his name. This guy then kidnapped the hyenas as revenge. It’s a story about men who feel ownership over women because of their own feelings without considering how women feel.

The action is fun. Harley kicks butt but it’s still a struggle for her. There’s an ebb and flow to the fight; it’s well paced. I also like the Chekov’s gun element with the darts. That was cool.

I don’t love the cover or the interior art. I think the style is meant to evoke Tank Girl which is cool. It’s a stylistic choice that I’m sure works for a lot of better. It just personally doesn’t resonate with me.

This is a solid chapter. It’s an interesting story that comes from real and is then combined with the insanity that comes with a Harley Quinn story. The action is cool as well. I don’t love the art but it’s an enjoyable read. 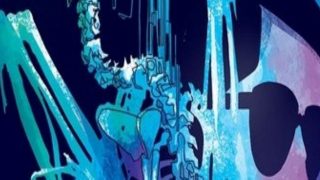