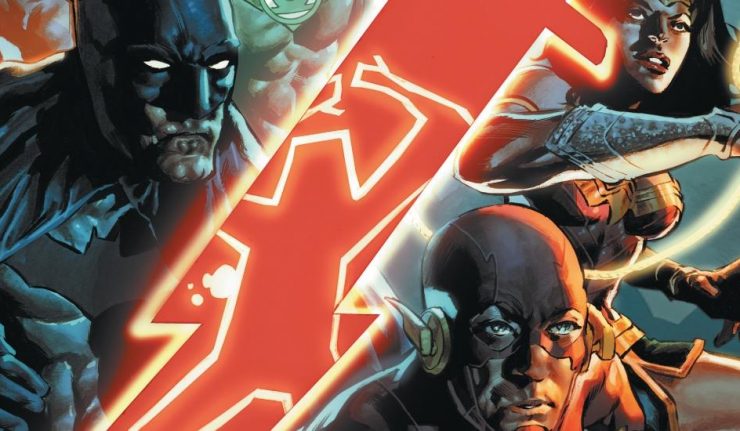 Justice League Annual #2: It’s a locked-room murder mystery in the Hall of Justice! Superman, an investigative journalist; Batman, the World’s Greatest Detective; the Flash; a CSI technician; Wonder Woman; a mystical detective for the Justice League Dark; and Green Lantern, an intergalactic police officer, must put their heroic minds together to solve the case. The Hall houses some of the greatest artifacts in the DC Universe—but also its deadliest. Who is the victim? Who is the culprit? And what is the motive? Can the Justice League put together the clues to solve the mystery before the murderer strikes again—and at them? Their lives depend on it!

Even though Robert Venditti no longer writes the regular title, he has returned for an encore performance in Justice League Annual #2, providing a somewhat atypical adventure for the League.

Justice League is DC’s foremost team book, chronicling the adventures of a team of the DCU’s most powerful team. Typically they fight the most powerful villains with entire planets at stake. During the current volume of Justice League, Scott Snyder kept pushing the stakes higher with every issue, bringing the story to a unprecedented level.

But Vendetti eschews all that with this story, proving that you don’t need to go to all that effort to provide a good Justice League story. Venditti’s run on the title was a lot more grounded than Snyder’s, but Venditti goes even further in this Annual.

There are no guest stars, exotic locales, or nigh-omnipotent villains threatening reality itself. Venditti crafts an engaging tale with just the core team of five heroes, one mid-tier villain with a straightforward plan, and it all takes place within the Hall of Justice.

Venditti also makes some interesting points about how the League operates and how that can be used against them or work to their advantage. In the former case, the team’s preparedness for any threat leads them to build defences against villains with powers similar or identical to their own. But these defences are highly effective when turned back on the League themselves. For example, red solar radiation meant to depower General Zod is used to negate Superman’s powers instead.

On the other hand, the League has the benefit of teamwork. Each of these defences are effective against a single villain (or hero in this case), but the team can overcome these measures by using teamwork.

Venditti begins his with an intriguing situation. A murder has somehow been committed within the Hall of Justice, and Batman calls upon the rest of the team to help solve the mystery. While Batman’s ability as a detective is frequently touted, the fact that the others have formidable crime-solving skills as well.

I also loved the nod to DC history by actually showing the Supermobile. When Barry asks why he needed a car when he can fly, Superman just states, “It was a different time”. However, I don’t think Clark really needs to explain himself to a speedster that built himself a “Flashmobile” not too long ago (in Justice League #2).

I also would like to commend Aaron Lopresti and Matt Ryan for their fantastic artwork for this story. They beautifully captured the iconic look of the Leaguers, as well as the fabled Hall of Justice.

The only thing that I would see as a negative about Justice League Annual #2, is that Venditti has only returned to write this story rather than resuming as the title’s regular writer. Hopefully, DC will find someone to take on that task soon.

In Justice League Annual #2, Robert Venditti demonstrates that you don’t necessarily need a complex, Earth-shaking plot to produce an excellent Justice League comic. Often a well-written straightforward story with some depth to it can do the job just as well, if not better.