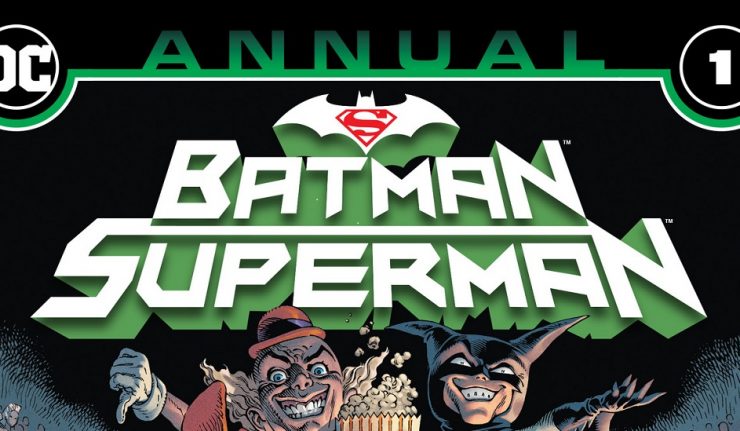 “Call me crazy.  But were we just transformed from being action figures on a cosmic playset?” – Superman

Batman/Superman Annual #1  – On a dark and stormy night in the fifth dimension, two mortal foes meet to settle an age-old question once and for all: In a fight between Batman and Superman, who would win? The combatants? Mr. Mxyzptlk and Bat-Mite. And in this battle for the ages, you will find out if a fifth-dimensional imp can bleed. It’s all in this, the ultimate slugfest between the Dark Knight and the Man of Steel-plus a whole lot of magic!

Once upon a time with DC, you had one magical imp, Mr. Mxyzptlk, who first appeared in the comics in 1944 and eventually was on screen on the ABC morning cartoon Super Friends.

Not long after in 1959, Bat Mite arrived on the scene, and eventually made his way into a 1977-78 CBS Cartoon Batman/Tarzan Adventure Hour.  I was always the unlucky kid who caught more Tarzan episodes than Batman, but I digress.

Comics in those days were subject to some campiness and silliness.  And as we know them today, Frank Miller and others introduced a bit darker incarnations of Batman and Superman with more intense stories.

DC has a group of artists and writers now that really know their history and have peppered in some homages to the past.  The DCeased series has been really great about putting in Amazo, The Creeper and Ragman.  If you don’t know these characters, these are examples from when I was a child in the 1970s, and comics were a bit lighter and had a one issue wrap up in stories.

Perhaps it is nostalgia of me and my friends playing with action figures having the same debate.  Who would beat who?  Months ago, we revisited the Flash versus Superman in a race debate.  Now we get the ultimate (well maybe not the ultimate because I think Wonder Woman could beat both of them, but I digress) battle between two imps.

This comic is simply to be enjoyed.  From the art work to the glimpses of old  fashioned ways to beat both heroes.  I mean, who can turn the sun red but Batman, right?

Finally, to see Krypto and Ace – The Bat Hound fighting over what appears to be two action figures of Mr. Mxyzptlk and  Bat Mite…that’s priceless in these books!

The only sound you hear is that old fashioned TV static between channels when we used to have only four channels and an antenna on the top of our house.

Batman/Superman Annual #1  – Buy this book, sit in a hammock and enjoy your favorite snack you had as a fourth grader.  You’ll appreciate that time if you are an adult reader!