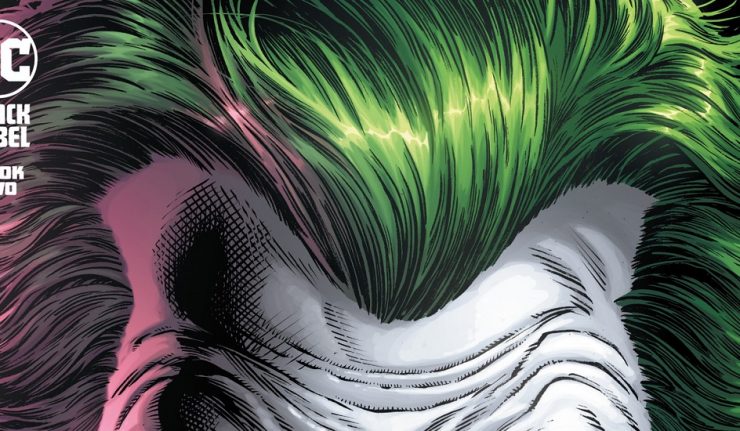 Thirty years after Batman: The Killing Joke changed comics forever, Three Jokers reexamines the myth of who, or what, The Joker is and what is at the heart of his eternal battle with Batman.
New York Times bestselling writer Geoff Johns and Jason Fabok, the writer/artist team that waged the “Darkseid War” in the pages of Justice League, reunite to tell the ultimate story of Batman and The Joker!
As Batman and Batgirl follow an unexpected thread linking the three Jokers with someone from the Dark Knight’s past, Red Hood dives headfirst into trouble and finds himself struggling to stay afloat without the aid of his allies.
Batman: Three Jokers #2 continues its trajectory as the ultimate examination of The Joker and his never-ending conflict with Batman. Prepare yourselves for the second chapter of one of the most terrifying and personal mysteries Batman has ever faced!

Geoff Johns starts with a scare.  A really deep scare as The Joker arrives “home” for dinner in his picket white fence neighborhood to his wife and son.  No Harley here.  No Punchline.  Just a wife and son in pure terror over a dinner of octopus.  It’s a picture of domestic abuse if there ever was one.  The “Comedian Joker” is not so funny.

The “Criminal Joker” is consumed by the Batman and appears to be the so-called leader of this pack of Jokers.  However, as we saw in the last issue, “The Clown” has bit the dust at the hands of Jason Todd.

Speaking of Jason Todd/The Red Hood…this is a powerful psychological issue for both him, Barbara and maybe even Batman.  There are some open psychological wounds, but writer Geoff Johns and artist Jason Fabok open some new physical wounds for Jason.  The crowbar scenes are haunting as when we saw him “die” in 1988.

Johns also provides Barbara Gordon with the heart of the Batman Family.  She appears to be the Yin to Bruce’s Yang.  A warrior with a heart and a healing heart at that.

Jason is a kindred spirit to Barbara and as we see this evolve, we are reminded of what she went through to even heal in mind, spirit and body.  This is some strong writing and Geoff Johns is to be commended for his homework!  His way of connecting dots to prior history is superlative given the Red Hood and the Joker dialogue.

What Jason Fabok is doing with these Jokers is outstanding.  Each with a personality that is the Joker, but isn’t the same.  The comic Oscar goes to Fabok in that how he draws each can give you a chill, a scare, or just downright disdain as to why Bruce has not found a way to simply lock up his nemesis forever.

That swimming pool…..yuck!  No spoilers here, but I don’t think I can ever smell chlorine again and not think of what the Jokers are doing in their freakish Dr. Frankenstein plans!

Almost every page has six to seven frames telling the story in a cinematic fashion.  This makes the story much more enriching as well as takes the pace up a notch.  You feel like you are in a movie when reading this book!

Are we suffering from Joker overkill as we have just seen The Batman Who Laughs consume almost every comic angle at DC.  We are in the midst of the Joker War in the current timeline.

But this comic… history is the name of the game in this comic.  I mean…Joe Chill… well played Mr. Johns….well played!

I’m in!  I’m really in.  This is a great pairing of heroes and to see how they all face the purple demon(s) is going to be interesting!