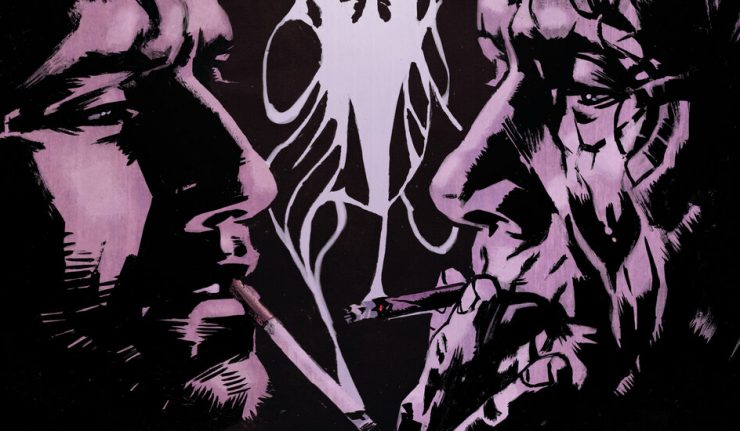 John Constantine: Hellblazer #10: The spectre of his older self (and the terrible bargain he made to get another chance at life) has been playing a cat-and-mouse game with John Constantine for months now-but now the game is over, and it’s time to get down to business. Namely, the business of destroying absolutely everything that made that second lease on life worth living…

For months Simon Spurrier has been telling standalone and two-part stories. But with issue 10 this month Spurrier is weaving those stories together as the series inches closer to an unfortunate end. This month’s standalone sees John trapped in his own dream as the spectre of his aged self invades his mind, as well as the dreams of his friends.

For an issue that takes place almost entirely inside someone’s mind it’s really great. Not much physically happens, but Spurrier has written a fantastic story that gets to the heart of who John Constantine is. Literally.

As a dream sequence Matías Bergara is given loads to play with and he makes it work. Some pages are downright disgusting to look at while others are hauntingly beautiful. Even old man Constantine himself looks so uncanny it’s an incredible issue for artwork. With Jordie Bellaire on colours everything pops. Especially the more explosive of the sequences.

It’s a really strange feeling reading these Constantine comics now that we readers know the series is ending. It’s hard not to have the thought in the back of your head saying “they’re cancelling this” while there’s a grin stretched ear to ear across your face reading it. This series has obviously reviewed very highly both here and across the reviewer board. As fans grow attached to certain creative teams or certain runs in comics it’s hard not to take cancellations like this one personally.

Can you go from a paragraph like the previous one to a section on negatives? This reviewer says no. However, the series is still cancelled, so there’s a negative.

Spurrier, along with Bergara and Bellaire, have crafted yet another fantastic issue of Constantine. At this stage these reviews are starting to sound like manifestos on why John Constantine: Hellblazer should continue. This isn’t just a good run; this is one of the best Constantine runs of all time. Spurrier’s name deserves to be up there with the greats from the Hellblazer years. The fact that the series is ending earlier than all of us would have liked is irritating even as the issues continue to top review aggregate sites.