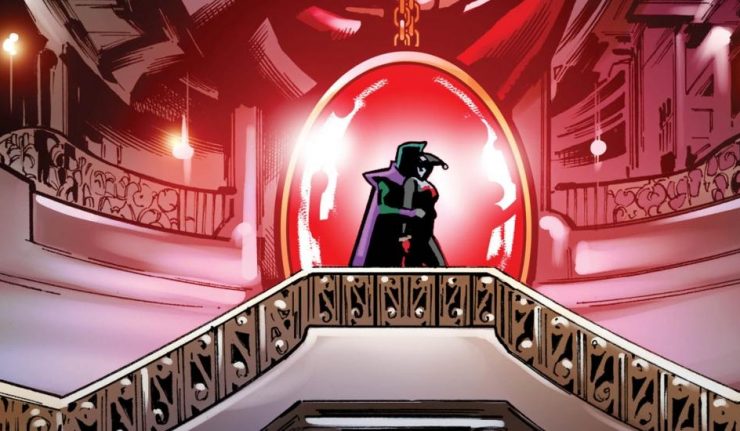 Injustice: Year Zero #7: Batman seems to believe the dead JSA member was murdered by one of its own, but Superman disagrees and has his own theory about what’s going on. Amazing Man gets a surprise visit while Joker experiments with a new way of using the amulet…on Harley.

Injustice: Year Zero #7 picks up the story shortly after the shocking events of the previous chapter. It seems that Green Lantern Alan Scott actually survived the fall he suffered when his ring’s charge expired mid-flight.

After his analysis of the evidence, Batman suspects that Alan killed fellow JSA member Wesley Dodds (a.k.a. the Sandman). However, Batman is in the minority, as most of the other heroes present don’t believe it’s possible. However, Doctor Mid-Nite takes a middle position, as the evidence seems to point that Alan’s actions that night are suspicious.

I find it somewhat ironic that they’re all correct in a way. Technically, it was Alan’s body that committed the murder, even if he was being possessed by the Joker at the time.

We also see a touching scene of Superman comforting Alan’s partner, even going so far as to let him in on his secret identity. Superman is clearly still the hero we know and love and not the villain he is destined to become in this version of the DCU. There is no evident pre-existing flaw in his character to explain his later corruption. Does this imply that the Superman of the main DCU might also turn evil if he were to suffer a similar series of events?

Also, we see what caused the breakup of the Joker and Harley Quinn in this universe. The Joker uses his mind control ability to make Harley jump from a great height. The actual height is not really shown, but it is clearly enough to traumatize her and cause her some degree of injury. Was the Joker intending for the fall to kill her, or did he expect that she would just be injured? Or worse, did he even care?

Anyway, Harley has a rare moment of clarity, and leaves the Joker. It seems that Harley has been expecting something like this to happen. We see her reading a note she apparently wrote for herself in the past, apparently having felt a situation like this to be inevitable. This makes her relationship with the Joker even sadder, showing that on some level she recognized how self-destructive it was to get involved with the Joker in the first place.

Tom Taylor hasn’t disappointed me yet with this story. This story has me thoroughly entertained. And even if I could find any continuity nits to pick at, those would be negated by this being an alternate timeline, not the main DCU.

With Injustice: Year Zero, Tom Taylor is delivering something of a unique experience. This is a story that keeps us guessing, despite knowing the future destinies of many of the characters. This is quite a feat to manage in a prequel story. I look forward to seeing what further surprises Taylor has in store for us.