Review: The Nice House On The Lake #12 – Final Issue

“The Nice House On The Lake” – Book Twelve 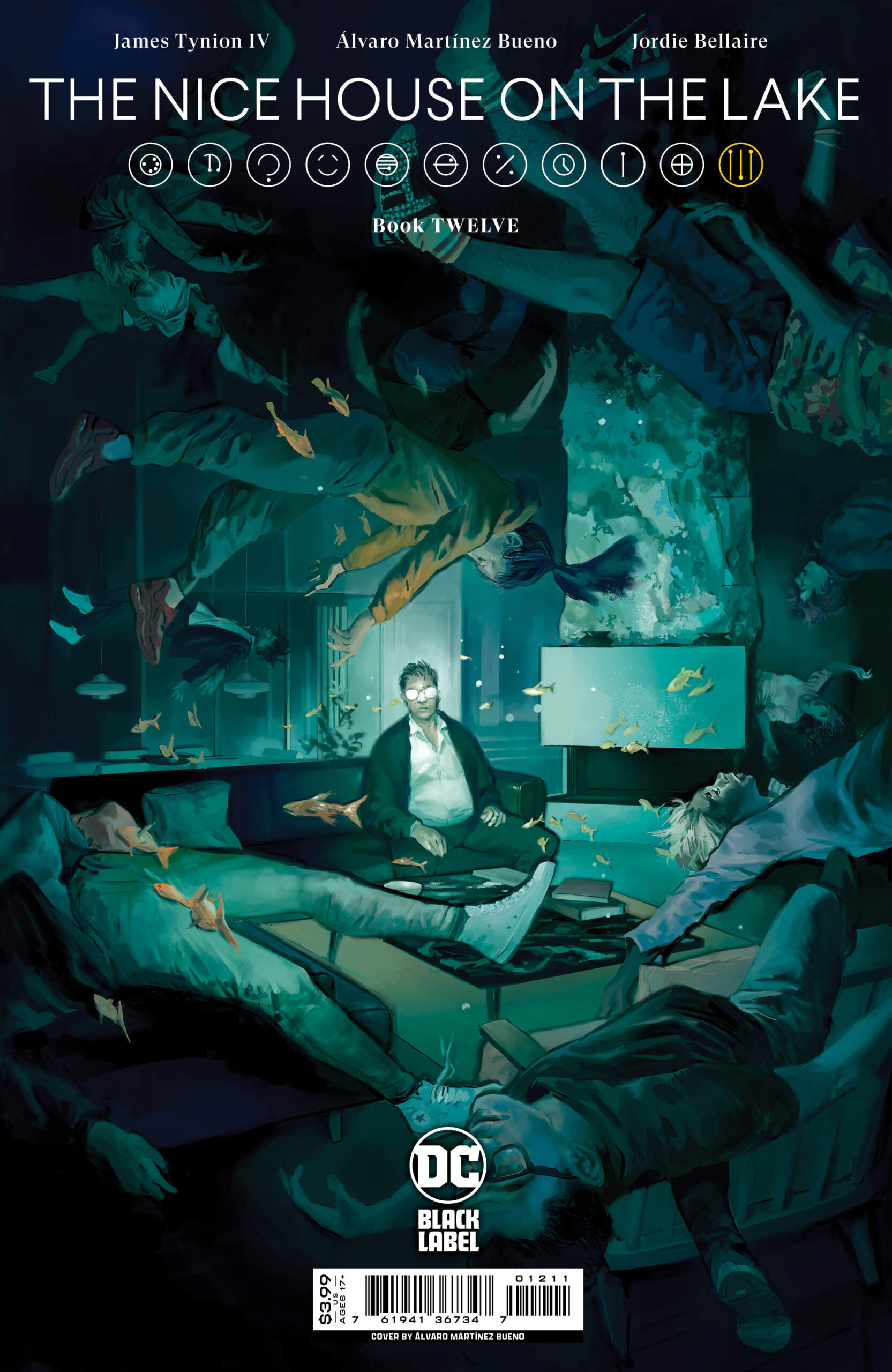 A journey that began in early June 2021 comes to an end in late December 2022, with the release of The Nice House On The Lake #12. This series has shocked, terrified, and delighted me in turn.

Having met and interviewed both the writer, James Tynion IV, and the artist, Álvaro Martínez Bueno I know just how much love, blood sweat, and tears have gone into these pages. The best news? as James said in his interview, this chapter may well be over, but there’s more story to tell. 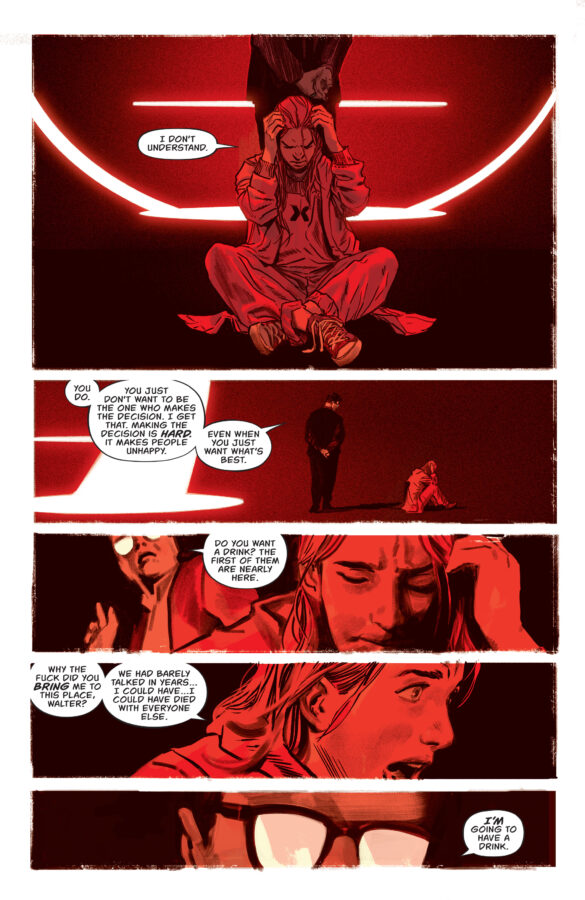 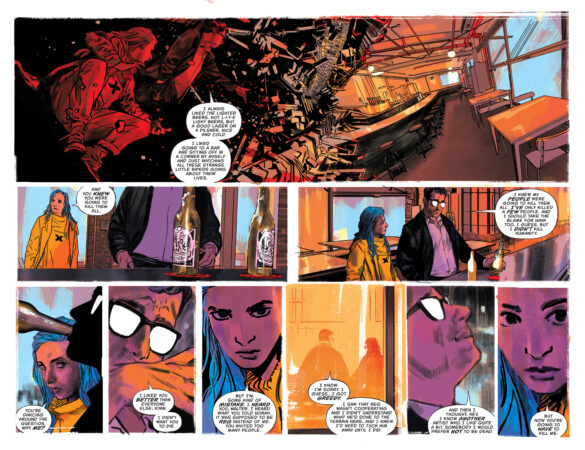 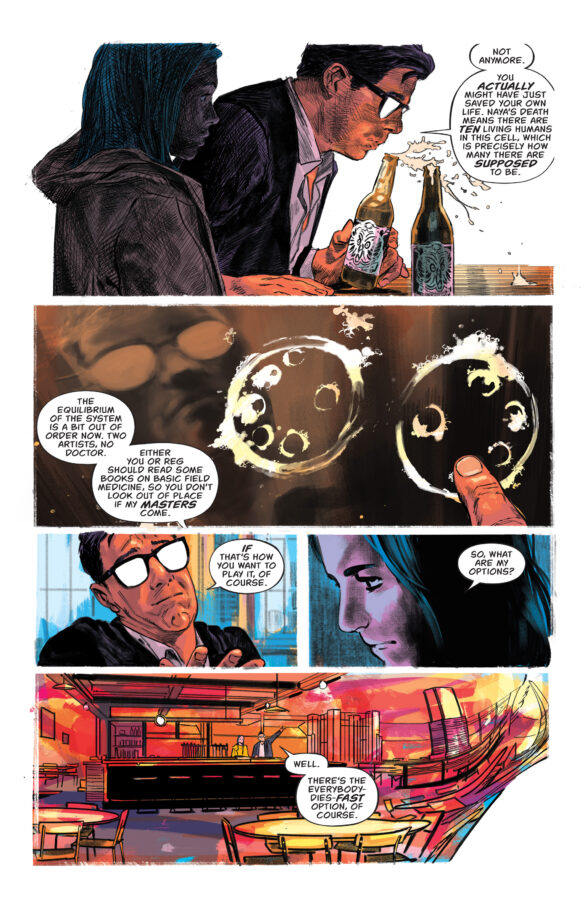 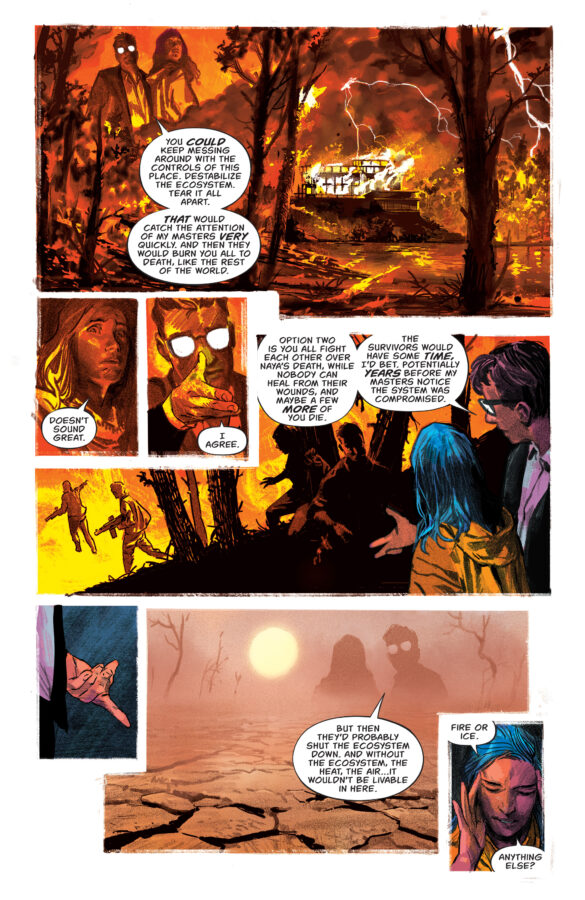 Few series have hit me in the same way that this one has, emotionally. I feel a kinship with Walter, and with his friends. I’ve brought a few people to DC Comics News, and to our sister sites Dark Knight News and Fantastic Universes. These great people have, over the years, become more than colleagues, they’ve become part of an extended family, spread over the globe with a common love of comics and stories. If I knew the end of the world was coming but had a way of saving them, I would.

The Nice House On the Lake #12 concludes this chapter, which tells  the story of a being who can control people like chess pieces, characters in a video game, or protagonists in a book. Every day, writers make choices about who lives and who dies in the stories they tell, but Walter does it with living, breathing human beings. Yes, he’s saved them and given them the perfect home and everything they could ever need, but the biggest, most beautiful, magical cage in the world is, at the end of it all, still a cage. The freedom to do what you want, read, watch, eat, and drink whatever you like may sound great, but only being able to do it with a limited number of others isn’t, particularly when that group has been chosen by someone else.

From the moment this series started, I’ve praised the writing and, not just the line art, but every aspect of the visual storytelling. The team of Álvaro Martínez Bueno, Jordie Bellaire, and Deron Bennett (AndWorld design) have redefined what collaborative storytelling is. Once again, in this issue, there are whole pages that are made up of text and color, with only avatars of the character’s faces. Were these pages created by Deron and Jordie, just Deron, or Álvaro, Jordie, and Deron as a team? I don’t know, but I’m eternally grateful and incredibly impressed. Using web pages, message threads, and transcripts to tell this story has given readers a comic that looks, feels, and reads like no other. 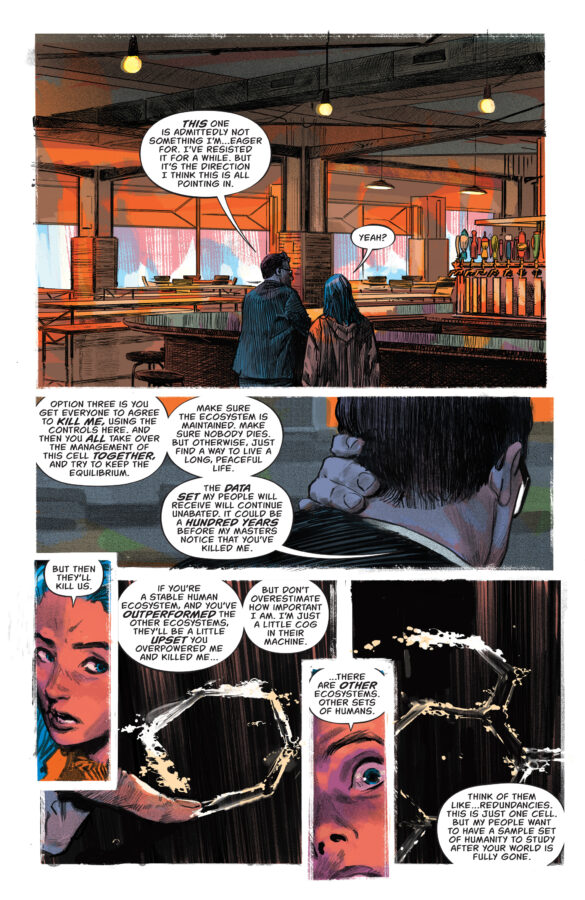 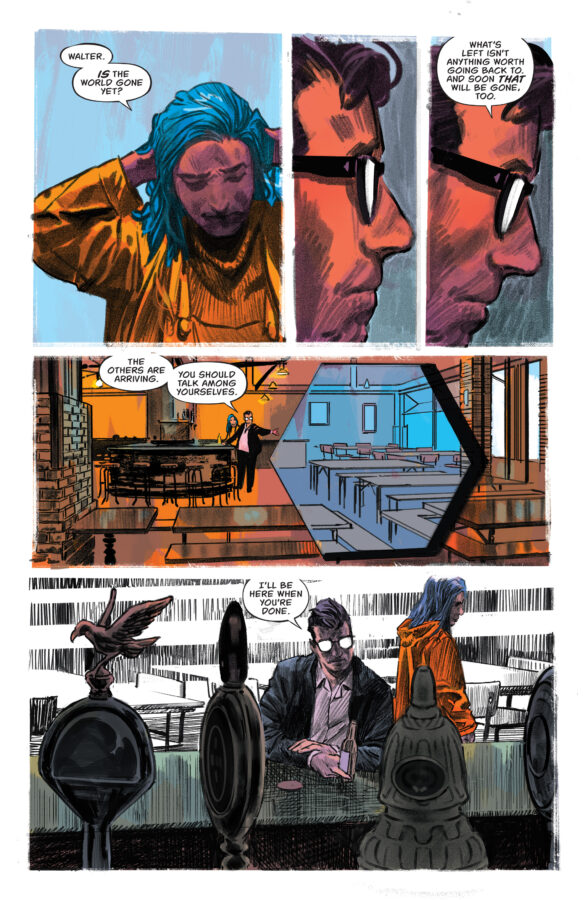 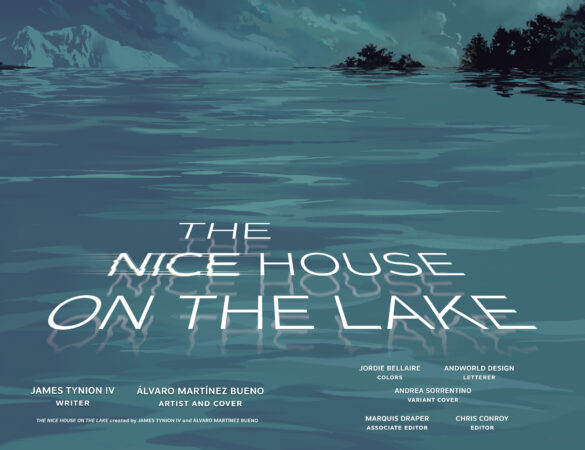 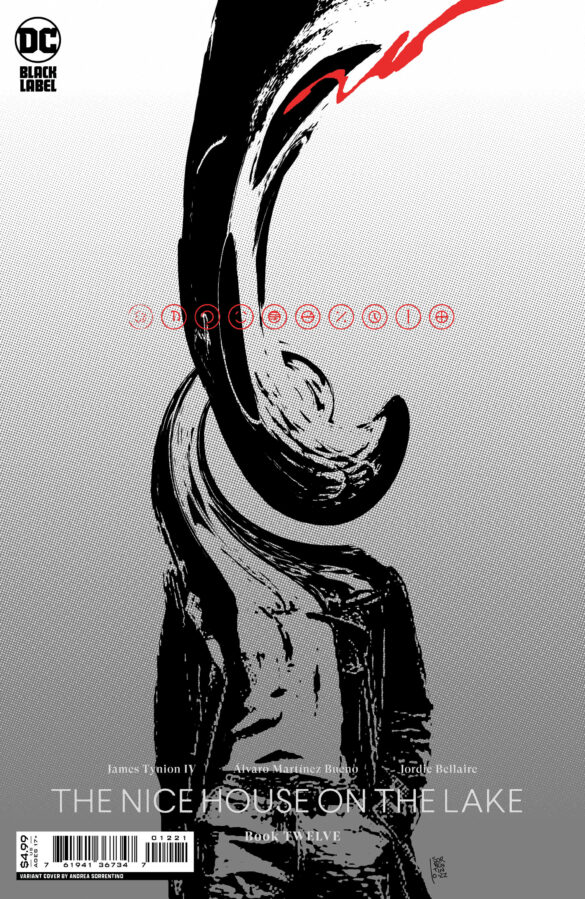 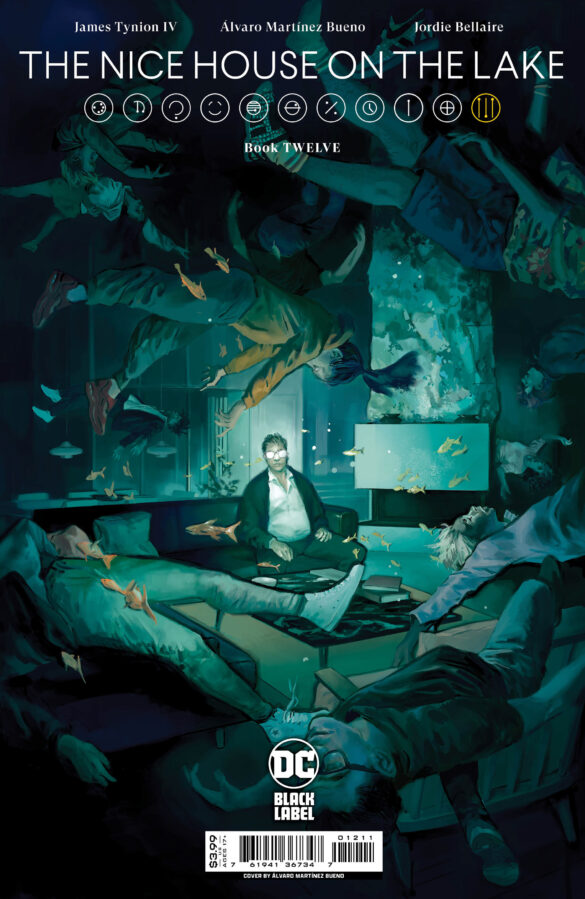 I’ve been sitting on the knowledge that these twelve issues were, what can only be described as season one of this story, for a long, long time. Now that both James and Álvaro have confirmed it, I can breathe a sigh of relief. This issue has an ending, so can be left here, but there’s so much that I (and many others, I’m sure) would still like to know. The trouble is we don’t know exactly when that’s going to happen.

The Nice House On The Lake #12 is an amazing issue, both to read and to look at. The creative team that put this story together ranks, at least in my mind, as one of the best in all of comics. If you’ve never read this series the first collected edition is out now (collecting issues #1-#6) and volume two comes out on March 7th, 2023. Do yourselves a favor and pick them up.

If like me, you’ve been following this story from the beginning, then this finale will satisfy you, but will also leave you wanting more. At least we now know that we’ll actually be getting it.