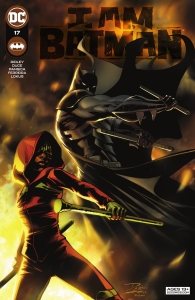 I Am Batman #17: Following the shattering revelations of the previous issue, Jace must set aside his renewed bitterness toward his father and go save his mother. But Jace doesn’t go it alone. Ready or not, Tiff steps up as New York’s newest hero.

I Am Batman #19 picks up immediately from where the previous issue left off. Jace’s parents have just dropped the bomb on him that Tanya Fox is not his mother. However, last issue left us with a lot of questions. It turns out that Lucius is indeed still Jace’s father, having had an affair with a subordinate at Wayne Enterprises, Elena Aoki.

When Elena became pregnant, Lucius confessed his affair to Tanya, who agreed to raise Jace as her own son. However, it’s unclear how Elena felt about this. Did she willingly give her son up to the Foxes or was she browbeat into doing so by Lucius. When we encounter her later in the issue, she appears to be quite resentful to Lucius, so perhaps she feels quite bitter about not being part of her son’s life.

Lucius and Jace also recently patched up their fractious relationship, but this revelation pretty much demolishes that. Jace now longer feels that he’s properly part of the family. And even worse, he finds out that Tam and Luke knew about this and never told him.

Aoki is a Japanese name and Elena is clearly shown to be an Asian woman. This means that Jace is biracial, not entirely Black as he believed. This would is another blow to his sense of self. And Jace is left wondering who he even is. 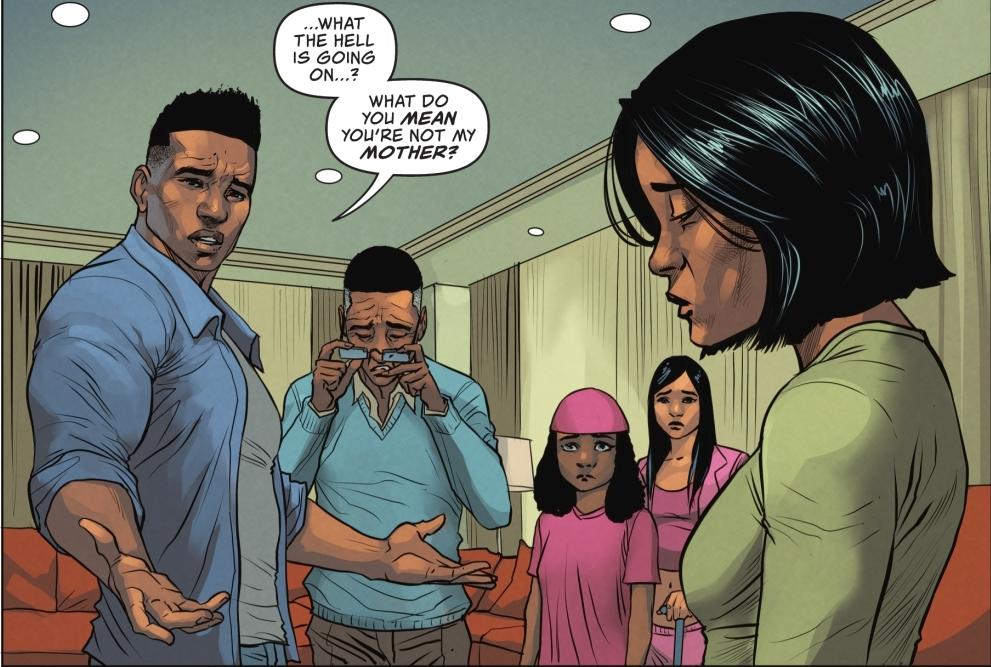 Of course, Jace has another identity. He may be unsure of who Jace Fox is, but he still can take some comfort in the fact that he can still say, “I am Batman”. However, he has yet to encounter the original Batman. That encounter is inevitable. And it remains to be seen if he will still be able to call himself Batman afterwards.

I like that Tiff is more level-headed in her reaction to the revelation about Jace’s true parentage. Jace initially shows no interest in rescuing his birth mother, telling Tiff, “Not my family, not my problem”.

However, Tiff can’t abide letting Elena be killed, no matter how much her actions may have hurt Jace. So, she sets out to do it herself. But Jace does eventually realize Tiff is right and arrives in time to confront the villains together with Tiff.

We also get confirmation in I Am Batman #17 that Hadiyah does indeed know about Jace being Batman. And she adopts her own secret identity, Nobody, to come to Jace and Tiff’s rescue. I like that her Nobody identity appears to take inspiration from Renee Montoya’s Question. This is rather appropriate, considering that we learned a few issues ago that the two heroines are old friends.

While I appreciated seeing Jace’s acceptance of Tiff as his crimefighting partner, it still felt a little bit rushed. I hope that Ridley didn’t have to compress this element of the story due to the series imminent end, as this seems to imply there are no current plans to continue Jace’s story in a follow-up series.

And this leads me to wonder where the end of the series will leave us. Will there be story threads left hanging that might never get resolved? Or will Ridley be forced to wrap everything up in a hurry. Neither option would be very satisfying. I would prefer that Ridley gets to wrap up his story at his own pace, whether in this series or a follow-up.

I Am Batman #17 is a very emotional and powerful chapter in Jace’s story. But it does have me a bit worried about how the series will be resolved next issue. I do hope that this isn’t the last we see of Jace’s Batman. And hopefully Ridley will return to pen another volume.