A Superman masterpiece never made it to charity….. 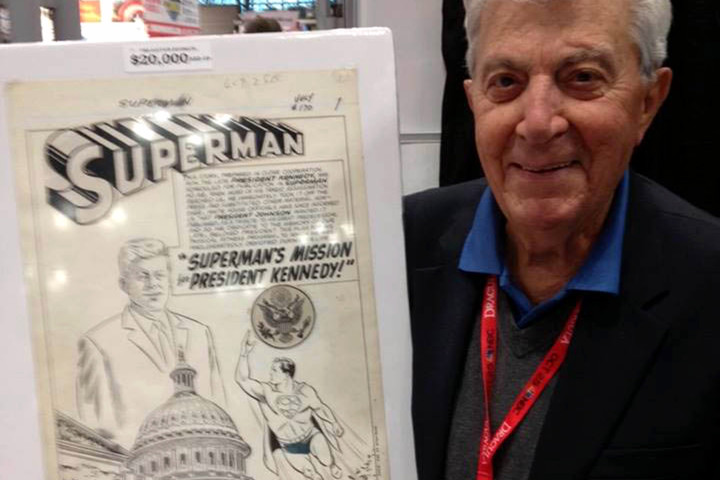 Old-school comics artist Al Plastino got the shock of his life at New York Comic Con recently, when he learned a nearby exhibitor was about to auction his own most valuable “masterpiece” — the original drawings for “Superman’s Mission for President Kennedy,” from a commemorative edition printed soon after the assassination.

Al Plastino, a silver age Superman artist, received a heart-breaking revelation when a New York exhibitor was going to auction his lost original drawing of ‘Superman’s Mission for President Kennedy’.

Plastino believed that his 10 pages artwork had bee donated to the JFK Memorial Library for the last 50 years. Instead the artwork has been in the possession of Heritage Auctions, a Dallas based auction house. It’s due to be gavelled off for $200,000 on the 50th birthday of the Kennedy assassination, until the recent publicity had halted the sale.

“I almost started crying,” Plastino said in an interview for the New York Post.

“I was thinking about my grandchildren,” the elderly artist added. “When I pass on, I want them to be able to see it — of course!”

Heritage has only revealed that pages have been in the  hands of an anonymous collector who bought them at a Sotheby’s auction for $5,000 in 1993. Advocates comic book artists claim that since the art never made it to the museum as promised, Plastino remains the rightful owner. Comic book publishers only buy the publishing rights to an artist’s work, not the work itself, a very disputed subject in the comic book world for years now.

“He never gave up ownership of the art because DC never purchased it from him or paid sales tax,” says Kris Adams Stone, daughter of comic book legend Neal Adams. She also stated that legal procedures was being taken to halt the sale of the artwork permanently.

“He is 91, he has prostate cancer, and this is not helping him at all,” she said of her dad, who lives on Long Island,

“He started drawing Superman when he was 17 years old,” added the daughter, who manages her dad’s business affairs. “Every time he talked about what he had done in the past, he would mention this project. Many, many times he has spoken about how proud he was of this art.”

Plastino’s “Superman’s Mission for President Kennedy” was made in collaboration with DC Comics the Kennedy administrationto promote the president’s national physical fitness program.

The issue was slotted for November, 1963 — but was halted when Kennedy was assassinated. Weeks later, the Johnson administration asked that the story be published. When it was released DC added a commemorative title page of JFK’s ghost watching over the capitol.

“This story, prepared in close cooperation with the late President Kennedy, was scheduled for publication in Superman No. 168, when word of his tragic assassination reached us,” the title text reads.

“We immediately took it off the press and substituted other material. However, White House officials have since informed us that President Johnson wanted it published, as a tribute to his great predecessor. And so, we dedicate to the memory of our late, beloved president this plea for his physical fitness program, to which he was wholeheartedly devoted to during his life.”