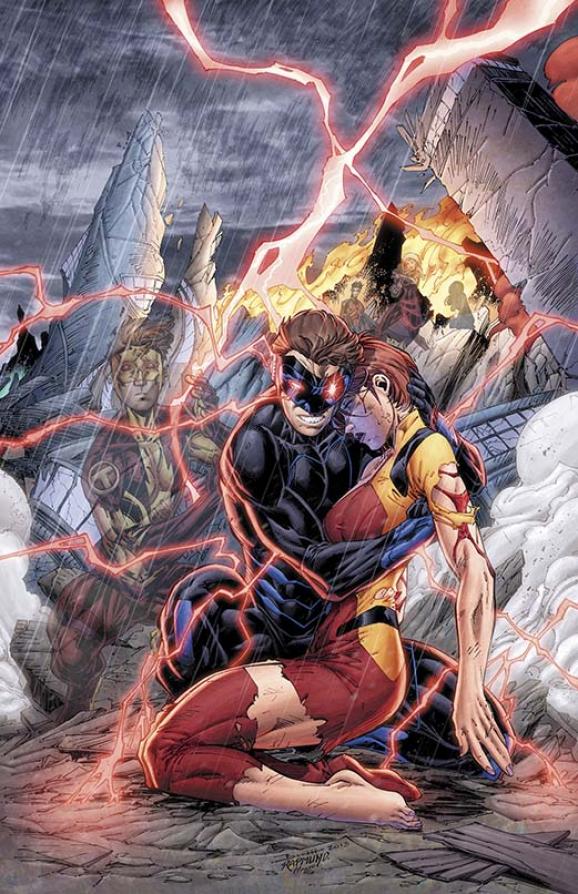 Scott Lobdell tells the story of Bar Torr, the true identity of Kid Flash, in Teen Titans #26. With an unbelievable amount of buildup throughout the series’ run, there was a lot riding on this issue. What readers got was a confusing, nonsensical romp that doesn’t deliver on any of the promises made.

Artist Tyler Kirkham’s pencils remain a great fit for Teen Titans, in spite of the lower quality writing. Kirkham’s view of the future is possibly the most valuable thing to be derived from this issue.

Bar Torr just gets his powers randomly. He crash-lands, but instead of dying, he gains super-speed for some reason. This is typical laziness from Lobdell; instead of writing a true origin or some kind of reasoning behind Bar’s sudden change, Lobdell decides to just ignore it. This is forgetting the fact that without gaining super-speed, Bar’s story ends there. Not only are his abilities contrived, but the whole story depends on this said contrived moment.

Apparently, Bar’s crimes were a big deal, according to previous issues. They made it seem like he was a psychopathic monster, when, in actuality, Bar was actually the leader of a rebellion against a seemingly unjust state. Being a rebel may be treasonous, but really, this doesn’t seem like all that much of a heinous crime, considering his family was butchered by the government he was rebelling against. Lobdell has been painting Bar as a villain – yet Bar is arguably justified in this issue. Really, it just points out the inconsistencies in the series and is a letdown to readers who were expecting some kind of big reveal.

Most importantly, Bar’s story revolves around his little sister, a barely relevant, paper-thin character who dies for no reason. Bar escapes the kill squads along with his sister, and eventually gives her up to live as an orphan in some kind of church so that he can go get revenge on his own. His revenge would eventually turn into a rebellion, and his rebellion would eventually bring him back to his home planet… where they kill his sister. This is one of the most forced scenes in recent memory. Shira receives very few lines, and Lobdell builds no sympathy before her ‘tragic’ death. Yet another case of Lobdell laziness. Shira is both introduced and killed this issue, without anything in-between worth mentioning. Lobdell introduces her simply to kill her in order to bring about some kind of artificial sympathy. It doesn’t help that her death at the hands of Bar’s rebellion doesn’t make much sense either. Bar wouldn’t be looking for his sister on his home planet? Bull.

It doesn’t get much worse than this. Months of buildup end in a whimper, not a bang. DC should re-evaluate whether or not they want Lobdell to continue establishing bad lore for their intellectual properties.