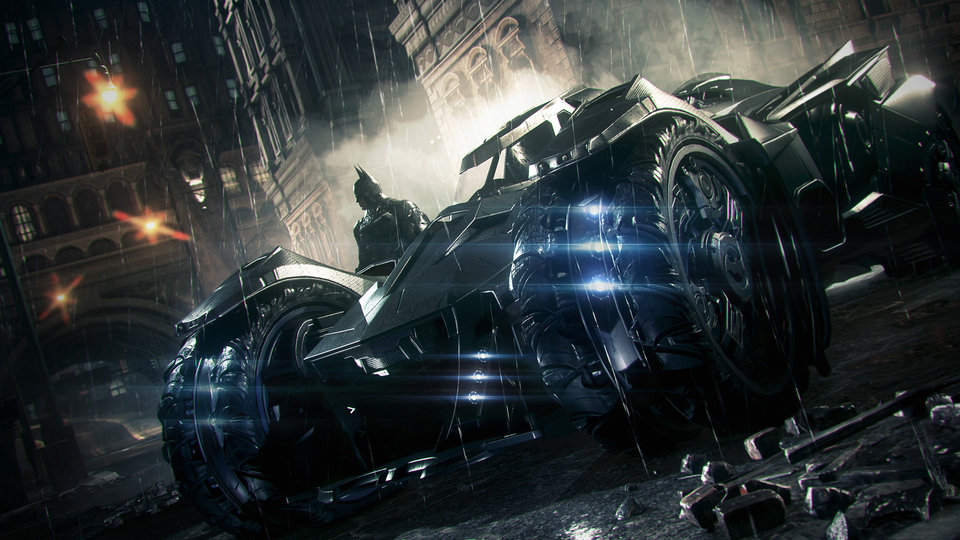 This is it. This is the big one, the game many of us have been waiting for since we finished Arkham City: Rocksteady’s final installment in what the developers call the “Rocksteady Arkham Trilogy.” The new game, Batman: Arkham Knight promises to improve upon the previous games in seemingly every way conceivable as allowed by the next gen foundation it was built upon.

Gotham City itself will be massive. And I mean massive. According to brand marketing producer Dax Ginn, Gotham city as a whole is 20 times bigger than Arkham Knight’s playable area. The city will include taller skyscrapers that Rocksteady describes as “epic verticality,” as well as visually distinct sections of town (such as a neon-lit China Town) to better assist the player in navigation. Despite the increased size of the map, Ginn promises “insane scale, but with that intimate detail we’ve provided in other games.”

Powering the game’s amazing graphics (said to be the best of the series so far) is the Unreal Engine 3, providing impressively real lighting and huge panoramas of the Gotham cityscape. Additionally, as huge and insanely detailed as the game seems to be, it boasts a feature that I personally wish could be integrated into every game ever: no loading screens. That’s right, Batman flows seamlessly from exploring the open-world to stepping into a building to initiating one-on-one communication. All without any visual loading screen.

Most anticipated of all, however, is what some might call the pièce de résistance, the feature we’ve all been waiting for: the drivable Batmobile. Said to be built like a tank, it can do much more than smash through buildings (said to be highly destructible). It has been fully integrated into Batman’s utility belt, as much a tool as the grappler or his batarangs. It serves as a quick mode of transportation across the city, allows Batman to engage in car-to-car combat, and even features an ejector seat, launching the Bat high into the air, where he can glide to his destination. “It augments his ability to move through the city, his navigational abilities, his offensive abilities, his defensive abilities. Every feature of the Batmobile has been designed to integrate with Batman’s move set in a very particular way,” says Ginn. The Batmobile also plays a central role in a new set of Riddler Challenges, which will undoubtedly be the root of much frustration once the game is released (because let’s face it, some of those challenges are hard. The Riddler’s a jerk).

Another in the influx of new and exciting features will be the ability to use gadgets whilst gliding. Allow me to repeat that: you can now use gadgets whilst gliding. This feature is revolutionary, as anyone who has ever played the series can tell you. Ginn confirms that Batman will be able to employ his line-launcher and batarangs mid-glide, as well as other gadgets that we’ll just have to wait and play the game to find out about.

Finally, we have what may amount to be the biggest addition to the franchise yet, the eponymous Arkham Knight. It has been revealed that, contrary to what I’m sure many of us assumed, Batman is not the only knight in town for this game. While the Scarecrow may be the villain in charge, the as yet unidentified Arkham Knight will surely be the star of this game. Ginn confirms that the Arkham Knight is an original character created for this game and that his role is “very significant” but declined to mention further details. With a wardrobe that reflects the Batsuit and an attitude that suggests Jason Todd’s Red Hood, I’d say calling him “very significant” would be an understatement. Personally, I can’t wait to see how the story plays out.

Sadly, as of now, at least, this is to be the end of the Arkham saga. “This is it. We are closing the book on Arkham and using the power of next-gen,” says Ginn. It’s a shame, but even a series as strong as the Arkham trilogy has to end sometime. For this series, the end will come to you via Xbox One, Playstation 4, and PC at some point later this year. Which gives me time to find the Dragons for an Xbox One between now and then. Where’s Littlefinger when you need him?