Hey guys, Darius here, and today I am bringing you, my loyal readers of all things DC, my review to issue #5 of Batman Eternal, titled “Disinfect”. In this issue we see Red Robin as the main point of view of this issue. He goes to look into a mystery that deals with the children from issue #1 of Batman Eternal who were targeted by Professor Pyg in that issue and how they were infected before they took a trip to the museum that day. The mystery eventually puts Harper and Cullen Row caught in the cross hairs! 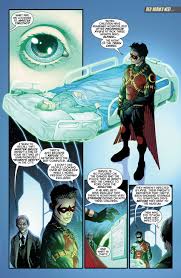 We are five issues in and so far I am loving every minute of Batman Eternal. This issue specifically was a good issue I think there were some dialogue issues, some over-utilized scenes with Vicki Vale, but overall, Batman Eternal Issue #5 is a good read. You will enjoy the fact that it is a Tim Drake/Red Robin focused issue. The dynamic between him and Batman will pull you in with every word. Plus this issue makes you want to go back and read “Death of a Family”, if you have not done so already, just to truly understand the hurt that Red Robin is feeling. This is a must have if you are a Red Robin fan and you love his and Batman’s dynamic.

Filmation’s ‘The Adventures of Batman’ Is Coming To...