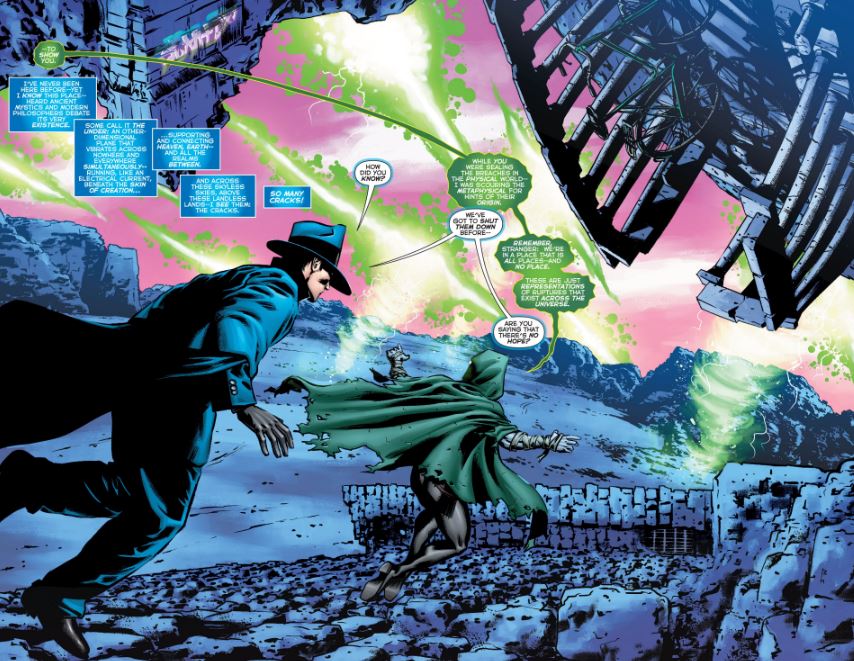 As I did with Justice League Dark, I decided to jump cold into the new issue of Trinity of Sin: The Phantom Stranger, written by J.M. DeMatteis with art by Fernando Blanco & Norm Breyfogle, and then see how eager I was to catch up on context later on down the road. I figured this would be a fun way to read Phantom Stranger anyways, as he’s always been a purposefully perplexing, ambiguous character.

Jumping right into an ongoing series can leave you lost, even outright bored, but I’ve always felt that the best monthlies take new readers into account, making an effort to ensure that each issue contains a rewarding arc of its own. Issue 20 of Phantom Stranger gives us an entire self-contained story about the Stranger and his sometimes-ally, longtime-hater the Spectre, teaming the two up to combat Sin Eater and his army of stubborn souls that refuse to move on to the afterlife from “The Under,” a sort of in-between zone that the Stranger has only heard of in rumor.

This idea alone is pretty neat. The concept that there are planes of existence that even the Phantom Stranger finds unfamiliar. The stuff that goes down there is pretty cool, too.

Stripped of their powers by Sin Eater’s master and forced to fight one another, the Stranger and the Spectre’s rivalry culminates not in a clash of superhumans, but in a couple of naked men trying to stab each other to death. The resulting scene is dark and a bit sad, laying bare the petty human weaknesses of superhuman characters. It’s a surprising moment that, along with some of the creepier stuff found in Justice League Dark, is cementing DeMatteis as one of my favorite writers of darker material.

Anyway, the plan backfires on Sin Eater and his gang of undead jerks when the mystic blade causes the two of them to merge with one another like in Dragon Ball Z, creating a giant Phantom Spectre hybrid combining the powers of both.

After thwomping the baddies and returning to their old selves, the Stranger finds himself influenced by lingering traces of the Spectre’s vengeful nature and submits Sin Eater to an appropriately cruel punishment. Dude had it coming, but the Stranger still feels pretty bad about it, and at the end of all this, the Spectre still hates the Stranger.

So, completely without context on the series, with a fondness for the Phantom Stranger but not the deepest familiarity, I found the whole issue gripping, entertaining and well structured. I’m eager to read more of the series not just to get some context, but in the hopes that every issue contains stories of this caliber.

Proof that episodic storytelling in superhero comics isn’t dead, this month’s TRINITY OF SIN is an issue that can be read on its own as a strong short story, or as a single chapter in a larger tale. It can be hard to balance the demands of longtime readers with the need to create stories that serve as entry points for new readers, but DeMatteis has shown a knack for it.

The art doesn’t do much for me. It ranges from standard-fare to distracting. Anatomy and perspective both look very off in some panels, and what is up with the Spectre’s legs in the opening splash? I’m not a stickler for technical perfection. Rather, I’d like to see Blanco & Breyfogle go a little bolder next time. Part of the fun of superhero art is that it can be “wrong” in ways that only make it look that much more awesome, but it needs to be a little more pronounced and deliberate than it is here.

An excellent entry point into the weird world of the Phantom Stranger. This is not just a good issue, it’s a good story that fits neatly inside of twenty pages, which is something that you don’t always get with ongoing monthlies. 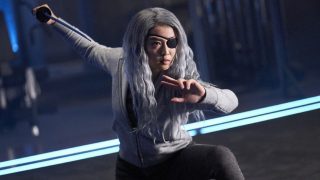