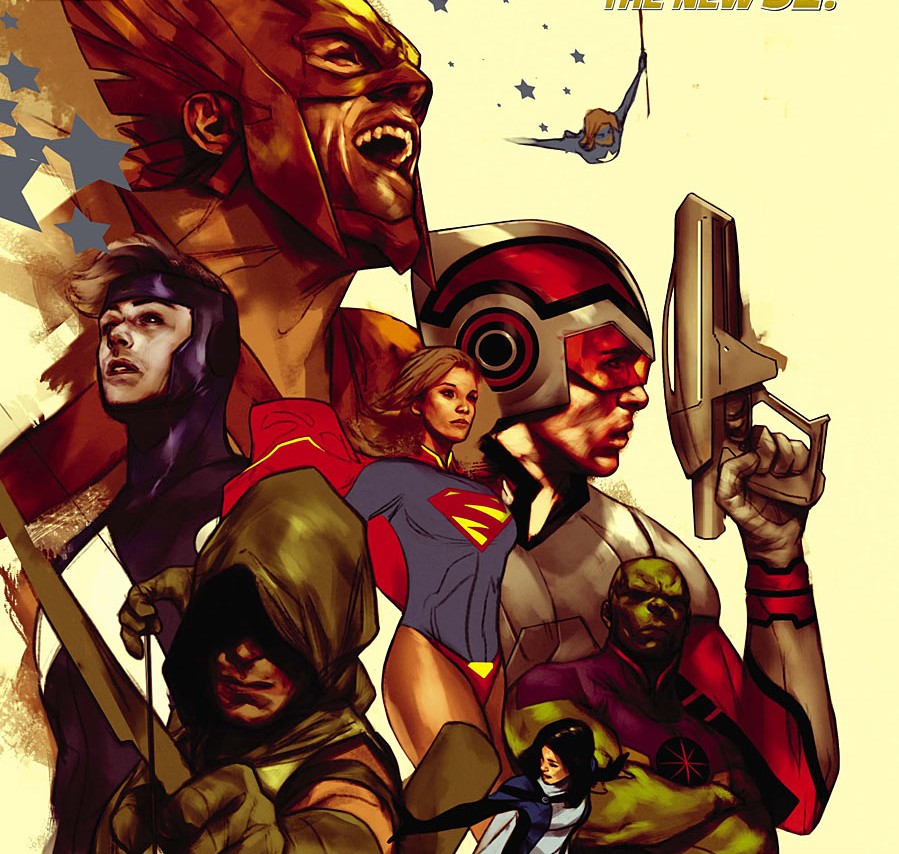 Writer Jeff Lemire and artist Mike McKone are back with another installment of Justice League United. Last issue saw our heroes mysteriously teleported to a distant planet known as Rann. Long time readers will definitely recognize this place as it had a vast history, prior to the New 52. Lemire also introduces Rann’s most recognizable name in Sardath, a scientist who had a strong relationship with Adam Strange in past continuity. It will certainly be interesting to see how these all of these old concepts get revitalized in the New 52 landscape.

It’s nice to see the book to a cosmic setting to soon. The introduction of Sardath (formerly Alanna’s father pre-New 52) was a pleasant surprise though it does make me wonder why Alanna has now b

een established as human. It’s particularly nice that the creative team decided to take the book off world and completely leave lanterns out of it. Often in the DC universe you can’t move 5 feet within the infinite void that is space without bumping into a lantern of some kind. While Green Lantern has introduced a lot of interesting concepts, the franchise has oversaturated the universe with their own colourful characters, and left little room for anyone else. Hopefully this book remains lantern free and allows characters like Adam Strange and Hawkman to create their own cosmic mythology.

Artist Mike McKone delivers solid pencils in this issue. He especially does a good job illustrating Supergirl and the newly designed Adam Strange, in an action packed double page spread. This book also comes with two stunning variant covers. The first by artist Ben Oliver, is a beautifully drawn team shot while the second, drawn by Ant Lucia, is a DC “Bombshell” cover featuring Stargirl. These covers provide plenty of variety that I’m sure will satisfy everyone’s artistic needs.

I often find it convenient when a character suddenly shows up in a team book without any prior individual focus. This is the case with Supergirl, as she shows up and jumps into the story w

ith a swift explanation for her being there. I would have preferred to see the path Supergirl had taken to get to this point, similarly to what Lemire is currently doing with Equinox.

While I believe this to be Mike McKone’s best work of the series so far, there was one small problem I had with his art. During an exchange between Animal man and Green Arrow, McKone appears to use the exact same panel three times in a row. Both characters also  appear to be looking straight at Stargirl as opposed to each other which causes some confusion since Stargirl is desperately trying to get their attention.

This issue is likely for most readers the best of the series so far. It has action, new character introductions, and reveals enough background information to keep any reader intrigued. Aside from a few minor art gripes and convenient plot points, this is a great read. Since origin stories in team books, such as this one, are often hindered by their need to … well… establish an origin, I find myself getting more and more intrigued with what comes next. This arc so far leaves me thinking that Lemire will be able to better develop the books cosmic setting and deliver a lot more surprises, once the predictable, yet necessary, aspects of the story have been dealt with. Overall, this is an all around great comic and a must read.