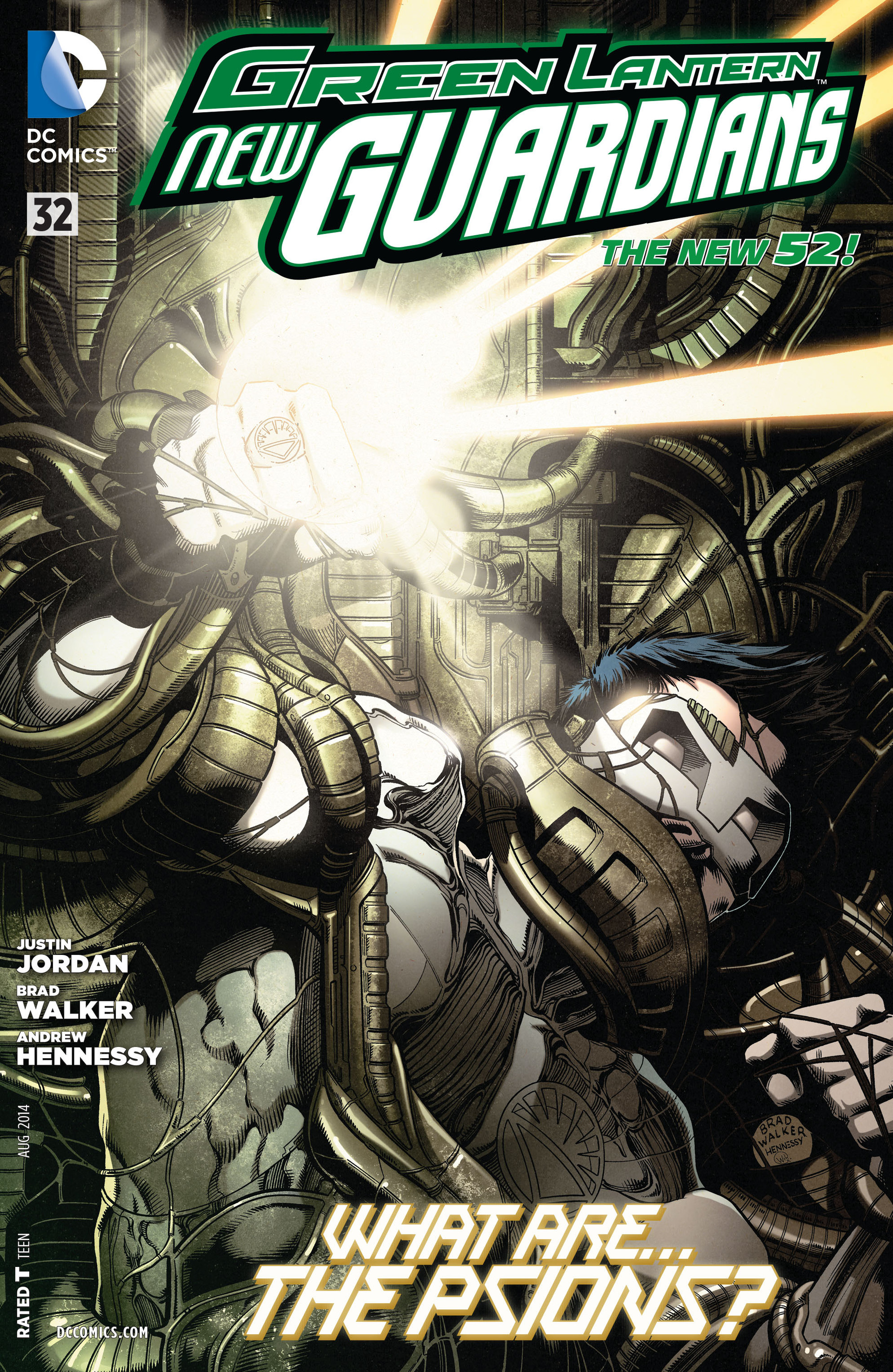 Following Star Sapphire Carol Ferris as she attempts to convince the Guardians of the Universe to help her search for the missing Kyle, only to be dragged along in a search for a Guardian kidnapped by mysterious forces, this issue promises another thrilling tale of cosmic horror the way only Justin Jordan can deliver. But while NEW GUARDIANS #32 has a lot of potential, the various elements just fail to mesh.

In a lot of ways, the art is the real star here. Though Carol’s and Kyle’s faces are occasionally somewhat oddly drawn, when it comes to alien worlds and cosmic scenery, the art team of penciller Brad Walker, inkers Andrew Hennessy and Scott Hanna, and colorist Wil Quintana excel. Their scenery shots are gorgeous and their violence suitably horrifying, setting the dark sci-fi mystery of the book wonderfully.

Beyond that, I find myself really appreciating taking the focus off of Kyle this issue. In the first place, continuing the story of the scattered Guardians really helps the Green Lantern corner of the DCU feel coherent and interconnected without drowning us in crossovers. In the second place, I’m glad to get more of Carol. During the original GREEN LANTERN: NEW GUARDIANS creative team’s run, NEW GUARDIANS was very much a team book, showcasing a group of assorted color Lanterns brought together by the mystery of Kyle’s ring and giving Lanterns Kyle, Carol, Saint Walker and even Larfleeze near equal billing. The team isn’t exactly back together here, but it’s nice to see at least one more member of the old guard getting focus beyond the Kyle show.

It’s really nice to see Carol getting some focus here… which is why it’s a shame that all her scenes are awkward and generally tedious. While her desire to find Kyle is understandable, her constant insistence that the Guardians drop what they are doing to look for him – nevermind that they are searching for their own missing member – feels strange and annoying. Perhaps her insistence later in the issue that the Guardians are too emotionally involved to be thinking clearly and shouldn’t be rushing off to find their abducted brother is supposed to be read as ironic given her own behavior, but if so, the narrative fails to convey that hypocrisy properly, and we’re instead left feeling confused and rather offput. Carol’s concern for her friend is understandable, but for someone literally powered by love, you might imagine that she would have slightly more sympathy for the Guardians’ concern. As is, not only is she focused on retrieving the possibly-dead Kyle beyond all reason, she is jawdroppingly callous towards the level of threat presented in this issue despite knowing full well that a Guardian had been kidnapped.

Carol’s awkward interactions with the Guardians are hardly helped along by the dialogue, either. With exchanges like “Do not spout some comforting nonsense to me, Carol.” “‘Comforting nonsense’ is not what I was going to spout.” and Carol’s inexplicable self-absorbed glibness, the words in these character’s mouths just don’t feel right, and the plot isn’t well drawn enough make up for it. The occasional poorly done techno-grokk from the absent-minded Guardian Yekop doesn’t help matters.

Perhaps the biggest weakness of this issue, however, is the pacing. I can see the sketches of the mystery beginning here and to be continued in the next issue: the mysterious force capable of kidnapping a Guardian, the twisted experiments on captives, and even the admittedly well laid trap to bring the other Guardians in for capture. But the moments between these revelations are oddly paced and bogged down by unbelievable character interactions and hamfisted dialogue.

GREEN LANTERN: NEW GUARDIANS #32 isn’t terrible. But in the end, it just doesn’t deliver. Perhaps, once the second half of this plot has been revealed, this will all fit more smoothly into the overall narrative. But after jumping on board with the previous issue, I have to admit – I’m a little let down.