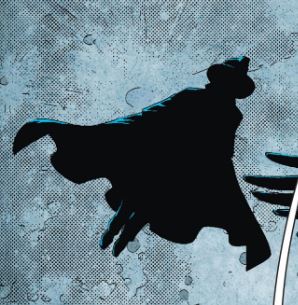 Although TRINITY OF SIN: PHANTOM STRANGER #21 by J.M. DeMatteis, Fernando Blanco and Cliff Richards is an impressive piece of comic storytelling, I’m not sure I’m such a big fan of the Phantom Stranger being Judas of Carioth. I’ve never been the most hardcore fan of the character so I don’t have too much of a right to get really indignant about it, but the idea of a character whose backstory is never detailed is pretty unique in a superhero mythos. DC has done a pretty good job of sticking to the Joker never having a definitely-canon origin tale, and I always liked that we had a heroic figure with his background similarly shrouded in pitch-black mystery.

Actually that brings me to my issue with the New 52 PHANTOM STRANGER: What makes the character special is the mystery. He was a hero who belonged in Cosmic Horror stories, and Cosmic Horror is at its least interesting when you’re dissecting the family trees of the Elder Gods, and the Phantom Stranger is at his most interesting when appearing on the corporeal plane as a hint at a grander design.

The New 52 PHANTOM STRANGER isn’t the first to explicitly feature the Stranger in otherworldly planes battling demons and cosmic abominations, but my favorite stories involving the character have always made that side of the character more implicit than explicit.

But I don’t want to sit here reviewing the Phantom Stranger stories I wish they were writing, I’ve gotta take it for what it is, and what it is isn’t bad.

I was impressed by the self-contained structure and strong character writing of last month’s PHANTOM STRANGER. This month we’re setting up the first act of a longer story arc, so it doesn’t have quite the same impact as last month’s issue, but there’s plenty of pathos being set up here, and as usual, I commend DeMatteis for taking more interest in the characters and themes than in explaining the mechanics of magic and mysticism that often slow supernatural stories down.

Themes of guilt and redemption are dealt with in a direct, visceral way. When the Stranger attempts to Refuse the Call, in Campbellian terms, we immediately see the consequences as an ally is nearly sliced apart by Cursed angels.

What I really like about this issue is the surreal imagery; plainclothes angels and nightmarish demons against the backdrop of rural Utah. It’s a weird scene well-illustrated by the art team.

The cliffhanger the issue ends on is the sort of thing that would normally have me bracing myself for disappointment, but I have a little more faith in DeMatteis than that. The payoff for such a bold setup could be immensely rewarding in capable hands, and what I’ve seen of the series suggests nothing less.

The issue, like the series, is consistently entertaining with eerie artwork and novel high-concept storylines.

Although the New 52 take on the Phantom Stranger isn’t as mysterious as some of the best takes on the character, strong writing and artwork make the series one of the stronger entries among D.C.’s supernatural-themed comics.