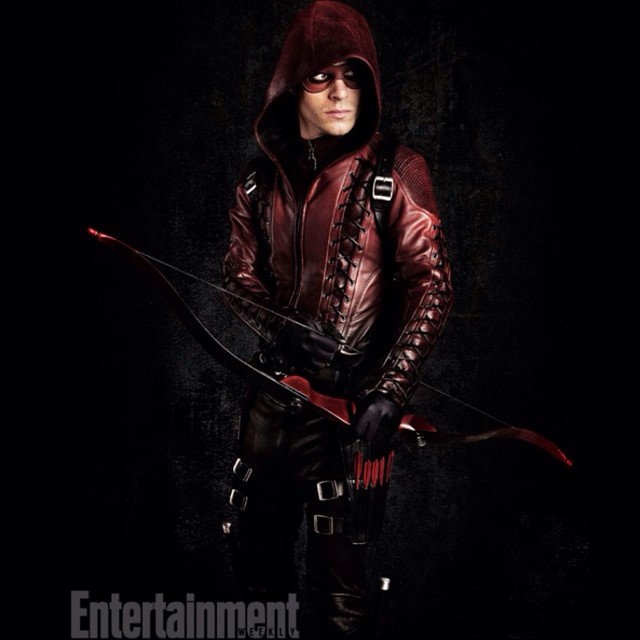 Earlier today, star of the smash hit CW television show ‘Arrow,’ Colton Haynes revealed his crime-fighting attire for Season 3 of ‘Arrow’ coming this fall. Haynes, who portrays Roy Harper a member of Team Arrow and in the comic books the former sidekick of the Green Arrow himself, posted the following on various social media outlets including Instagram and Twitter. “So stoked to finally show y’all! #Arsenal #A #SeeIAmActuallyCool@entertainmentweekly @arrowwriters”

SPOILERS FOR SEASON TWO OF ARROW AHEAD:

This comes after the events of Arrow season 2 where Roy had super strength given to him following his being given the drug Mirakuru where he became a member of the team of Oliver Queen, John Diggle, and Felicity Smoak. However at the end of season two, the antidote for the Mirakuru was discovered and given to Roy, meaning he must now use the skills Oliver had tried to instill in him with a bow. It appears now that the third season will have another archer added to the mix with Roy Harper becoming Arsenal, the current name Harper goes by in the comics.

In the comics, Roy Harper was the sidekick of the Green Arrow, or Oliver Queen and went by the name Speedy, a nickname that Arrow’s Oliver gave his sister Thea. However later on Roy would go on to join the Teen Titans alongside other sidekicks like Robin (Dick Grayson), Aqualad (Garth) and other various young heroes like Wondergirl, also known as Donna Troy.

However Roy Harper later would fall victim to a shocking addiction to heroin after he had been neglected by Green Arrow after Queen lost his fortune. Green Arrow, shocked an appalled by the discovery that his ward was a junkie punched Roy out and threw him out onto the street. Later on, the silver-age Green Lantern, Hal Jordan, found Harper and left him in the care of Dinah Lance or Black Canary. After a romance with a woman he was supposed to be fighting, Harper returned to the Teen Titans, no longer using the name Speedy, but as Arsenal, which appears will be the name that Roy Harper will go by in the third season of Arrow this fall.