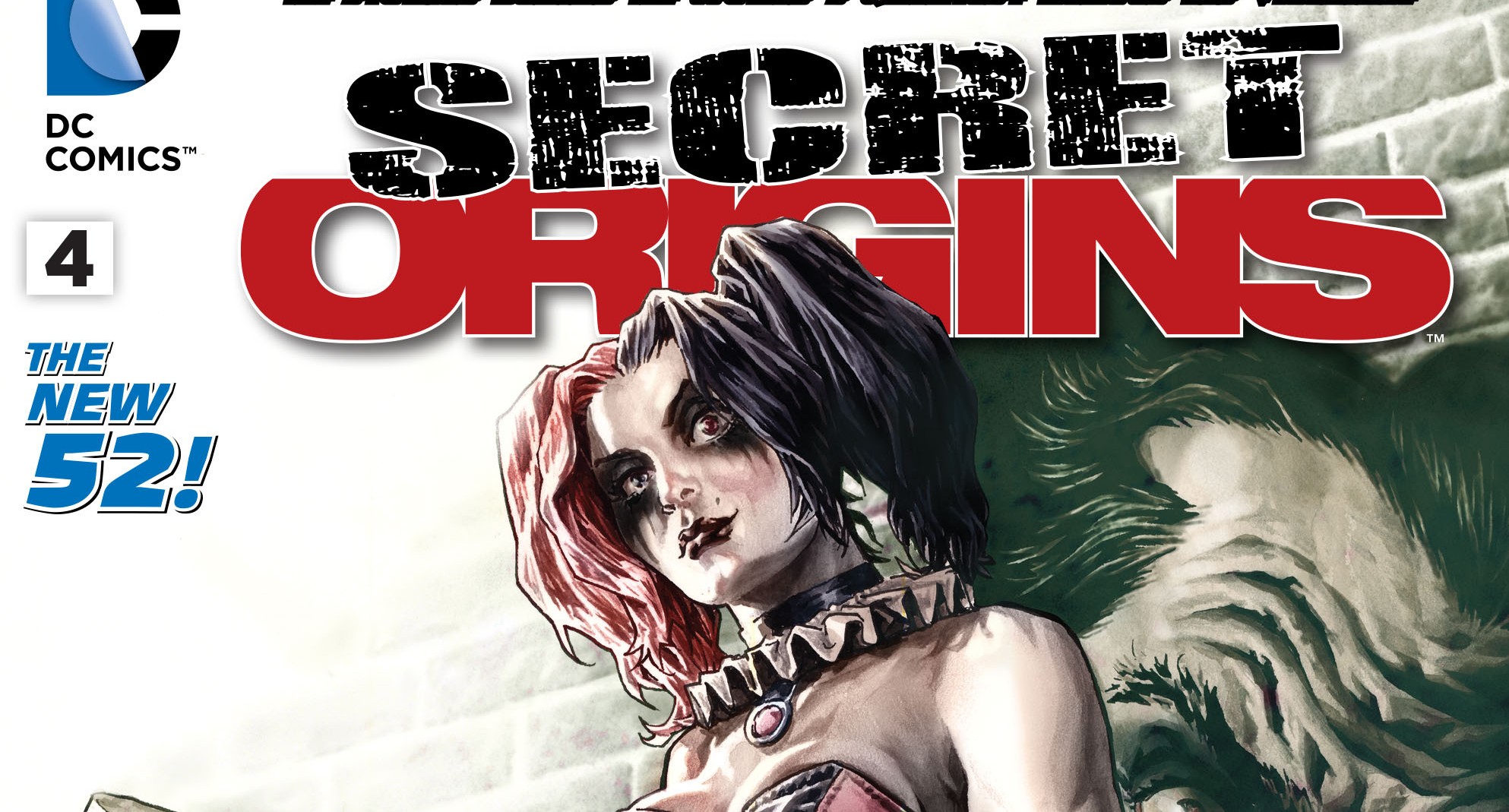 SECRET ORIGINS #4 is the first of the series to live up to its title.

The sales are in, and the message is clear – fans love Conner and Palmiotti’s HARLEY QUINN book. Mixing zany antics with cheerful violence, the new creative take is no Batman: The Animated Series, but its dark comedy and clear post-SUICIDE SQUAD direction for Harley Quinn hold a lot of charm. For the new book, this origin is perfect. But I’m not sure it’s an improvement on the old “Mad Love”.

I’ll confess to not having followed her New 52 appearances particularly closely, so I may be in error here, but to the extent of my knowledge, HARLEY QUINN brings something new to the SECRET ORIGINS table – a new story. It’s difficult to introduce novel content in an origin recap of an established character, but the tale of young Harley and her first crush, Bernie Bash, manages to pull it off. In a series built on old content, it’s nice to see some new stories.

Beyond that, though, this is just a very well told origin. Given how recently HARLEY QUINN debuted, the first, new-reader-friendly issue being only a few months back, the plain backstory blurb that other features might skate by with isn’t going to work here. Fortunately, Conner and Palmiotti deliver. The snippets of Harley’s life we see tie into each other thematically to create a coherent whole, and nothing essential is left out. From Harley’s family life to her first crush to the rise and fall of her relationship with the Joker to her final punchline to her audience, this feature tells you everything you could need to know about the HARLEY QUINN book, both in terms of tone and background.

Origin stories are told, retold and retconned constantly, especially for iconic characters. The first page of this special even lampshades that, having Harley mention, “Each time I tell this story, it’s a bit different.” I give Conner and Palmiotti a lot of credit for that. But I just don’t like the changes to Harley’s history established as New 52 status quo.

Certainly, origins must be updated occasionally, but so much of this just feels like change for the sake of being different, and I don’t find it nearly as satisfying as “Mad Love.” I’m confused by the seemingly arbitrary change from Harley becoming drawn in by the Joker over multiple therapy sessions to Harley deciding to go undercover amongst the inmates and becoming immediately infatuated. I don’t really like the decision to bleach Harley’s skin permanently – I miss the idea that Harley always had the option to wipe off the greasepaint and go back to her old life. And I’m not sure I’m sold on the level of violence Harley displays here. Certainly, she was a bruiser before, and depictions varied as to how aware she was of the violence she was inflicting. And it’s much better than the video game massacre of some plotlines ago. But the cheerful slaughter at the end of this issue just doesn’t sit right for me.

It’s nice to see a book that doesn’t take itself so seriously, and Conner and Palmiotti more than pull off the high-energy gallows humor. This isn’t the Harley I’m used to, but she’s close enough that I could learn to love her. Curious about the HARLEY QUINN book, but not ready to jump in? This feature is the sampler plate you’ve been looking for. But don’t go in expecting Paul Dini.

I haven’t been the biggest fan of the New 52’s take on the Green Arrow mythos. As a fan of ensemble cast members such as Mia Dearden, Connor Hawke and Roy Harper, I didn’t really appreciate the lack of Oliver Queen’s friends and family, and the general portrayal of him as the DCU’s answer to Steve Jobs soured me on the title. So when I heard that Lemire’s run on the book had really picked up the pieces of the book’s previous lackluster creative teams, I wasn’t particularly interested. After this feature, however? I’m not sure I’m ready to come back to Green Arrow. But I’m glad GREEN ARROW is in good hands with Lemire.

There’s a very definite “return to roots” feel to this special. Between the art and the hunting themes, GREEN ARROW invokes echoes of the infamous LONGBOW HUNTERS arc several decades past – not, I imagine, coincidentally. The themes of Oliver’s disillusionment with his public playboy life help bridge the gap between his wealthy background and his “hero of the people” image. I miss the self-centered playboy, but it’s a reimagining that stays true to the core of the character, and that’s the most important part.

Perhaps it’s just that I haven’t been reading the main title, but this section feels oddly disconnected from the GREEN ARROW title itself. As a standalone origin, it works fine. But there’s no real effort to deal with any of the most recent events in the GREEN ARROW book. We see little in the way of recurring villains or themes, and only a brief appearance by some of Oliver’s new supporting cast. The narrative takes us right up through Oliver’s rebirth as Green Arrow. Such a shame that roughly six years have passed since then. Perhaps it’s just an effort to leave the new creative team with a clean slate. But it’s jarring to see an origin feature so disconnected from the book it accompanies.

I’m the first to admit that this isn’t my preferred Green Arrow continuity. I’m not sure I’ll ever be satisfied with the new Green Arrow until there are some more old familiar faces. But Lemire’s take on his origin is excellent, and as an Oliver-centered piece, this really shines. You can tell that Lemire put a lot of love and effort into his Oliver characterization. It’s a shame he’ll be leaving the book soon.

Serving as the most recent installment of the ongoing “What are you even doing with Damian Wayne” saga, this origin is… surprisingly plot relevant for an origin story. There’s no relation to ongoing events – amazingly, not even a mention of Damian’s untimely demise in BATMAN INCORPORATED #8. Rather, this issue is almost a love letter to Damian’s time as the Robin to Dick Grayson’s Batman, and more to the point, provides an insight into the New 52 events surrounding Bruce Wayne’s “death,” something explored in little depth until now.

It’s hard to overstate how good it is to see Dick and Damian reunited again. While I didn’t really care for the bulk of Grant Morrison’s BATMAN AND ROBIN run, I still really enjoy the interplay between this particular dynamic duo, something dramatically underused in the New 52. With Damian’s death and Dick Grayson’s second near-miss with the same, I had no real hopes to see these two together in continuity again. So seeing Damian starting out as Robin in the wake of Bruce’s disappearance and Dick Grayson’s first efforts to reach out to him? Honestly, that alone is worth the price of admission to me.

The part of me that can’t help but attempt to make sense of the rather convoluted DC timeline is also really pleased to see this glimpse into the New 52 Batman death storyline. We hardly have the full story here, but the reader can get at least a sense of what has and hasn’t survived Flashpoint, and continuity is the better for it.

Finally, I’d like to take a moment to discuss Damian’s origin itself. I’ve honestly never really been pleased with a lot of it – compared to the birth and childhood of Ibn al Xu’ffasch – Damian’s predecessor in BATMAN: SON OF THE DEMON – I’ve never really liked the portrayal of Talia during Damian’s conception and childhood, to say nothing about my distaste for her role in his death. It’s not really resolved to my satisfaction here, but I am glad, at least, that the references to Talia “slipping something into Bruce’s drink” are gone.

Simply put, I hate the art. I know this is largely a stylistic preference, but I found it incredibly offputting throughout this feature. Ian Bertram is talented, and the composition and anatomy are quite skilled, but I consistently find that the facial expressions are wildly off, the poses look awkward and stiff, and everyone appears to have been stuffed with oatmeal rather than any vital fluids. Your tastes may vary. But if they’re anything like mine, then this will be a real barrier to your reading experience.

I’ll be honest – I have absolutely no idea what DC is planning with Damian. The prominent and timely billing of Damian as Robin seems to indicate that they mean to bring him back in the upcoming ROBIN RISES. Dramatic tropes indicate otherwise. I don’t know what they’ll do, and you won’t find any answers here. But if you’re looking for some timeline straightening and possibly the last Dick and Damian team-up for years to come? You’re going to want this story.

I have, in the past, written SECRET ORIGINS off as a doomed concept. I’m not really sure this issue has changed my mind. They haven’t all been like this, and they won’t all be like this. But for what it is – a series of origin vignettes – it’s a real pleasure to read. Perhaps SECRET ORIGINS will last, and perhaps it won’t. But even at $4.99, this one, at least, is worth it.