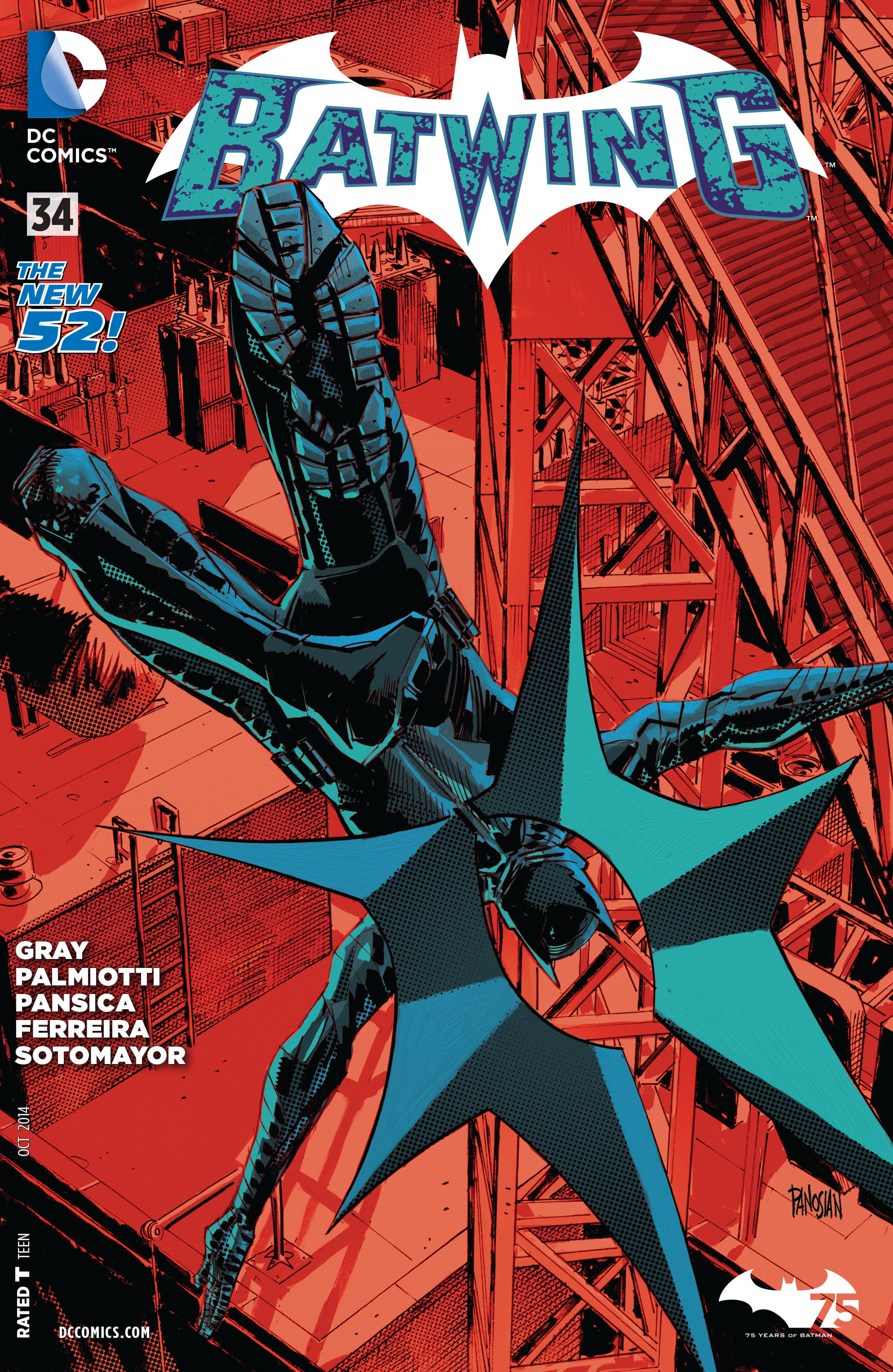 BATWING #34 by Jimmy Palmiotti and Justin Gray with pencils by Eduardo Pansica, inks by Julio Ferreira and colors by Chris Sotomayor is an old school feel-good super hero comic.

Regrettably, BATWING #34 is the last proper issue of BATWING, excluding next month’s FUTURES END special. The series has been setting up several ongoing plot lines for a while, and going into this issue I was wondering how they were all going to get wrapped up in a single issue: Batwing’s falling out with Batman, his sister’s mental state, his degenerating relationship with the rest of his family, the villain from his past, and the new bad guy from the previous issue who got away with help from some weird, violent creatures. That’s a lot to wrap up in one issue! Palmiotti and Gray took a surprising tactic to do it, and by that I mean they didn’t wrap up anything.

A lot of those issues I mentioned are referenced and color some of Batwing’s actions, but they are treated as ongoing life concerns. BATWING is ending. That doesn’t mean Batwing’s life or story is. It’s going to keep trucking along. We’re just not going to get to read about it in a monthly comic book. Some people might not like that there’s no finality, but I think it plays right along with the way the book’s been telling Luke Fox’s story since he’s taken over the title. Unlike a lot of modern super hero comics, this one, like the cape comics of older time periods, has always kept a keen focus on Luke’s life outside of his costume, whether that means is love life or, more commonly, his relationship with his family.  As such, it’s been firmly grounded as the story of Luke Fox, rather than Batwing. Thankfully they didn’t decide to kill him or end his career, so the issue took the more naturalistic approach of, “So these things are just going to kind of keep going on.” Maybe we’ll see more of Batwing in the future, or maybe we won’t. Either way, Luke Fox is going to keep on doing his thing and being a part of this universe. As someone who was a huge fan of the series, it’s a pretty comforting idea that despite this being the end of the actual series, Luke Fox’s story is still going to be happening out in that fictional space.

One reason I feel so good about this ending is the structure of the issue. It starts off with every panel being another day in Batwing’s life, which is one of my absolute favorite comic book narrative techniques. He’s been having a rough time of it, reflecting on the mistakes he’s made, in particular his failing to actually save some people’s lives and inadvertently allowing some baddies to get away.  In this small opening space the creative team stretches their muscles with some fun one-off villains, like communist steampunk rebels and an all-female team of performance thieves who seem to be dressed as astronauts wielding  katanas. It then for the last time shows us just what a devastating effect being Batwing has had on Luke’s family life. His mother seemingly hates him. He then takes his kid sister to a lecture, where she gets to chide him (and probably the male reading audience as well) on not treating women fairly. This is a nice little section since his sister knows his secret identity and still likes him, and acts as a bridge between the depressing qualities of the first half of the issue and the feel good ending, where Batwing stops a small gang of thugs and rescues a family. He says to them, “All that really matters is that we’re going home, safe and sound.”  And the final caption reads, “And this moment… right here and right now, in the company of this loving family with their whole lives ahead of them… this is the reason Batwing exists.” It’s just classic super hero-ing at its finest.

Along with all that, I continue to be really taken with this art. I just love the actual design of Batwing, with his sleek black suit and brightly glowing bat symbol on his chest. Batwing aways operates at night, and his glowing symbol makes for some neat effects as it cuts through the darkness.  And those inks are so heavy, yet crisp. I also love the big hits with big consequences. For example, almost every time he hits one of the thugs at the end, you see their masks shatter.

As cheesy as it might sound, my only problem with this issue is that it’s the last one.

BATWING #34 is a comforting end to a great series and a real high note to go out on. I just hope next month’s 5 Years Later-set tie in issue doesn’t do anything to ruin the legacy of a great comic book.

Buy this issue if you like bronze-age story telling, striking shadow contrasts, or great comic books.